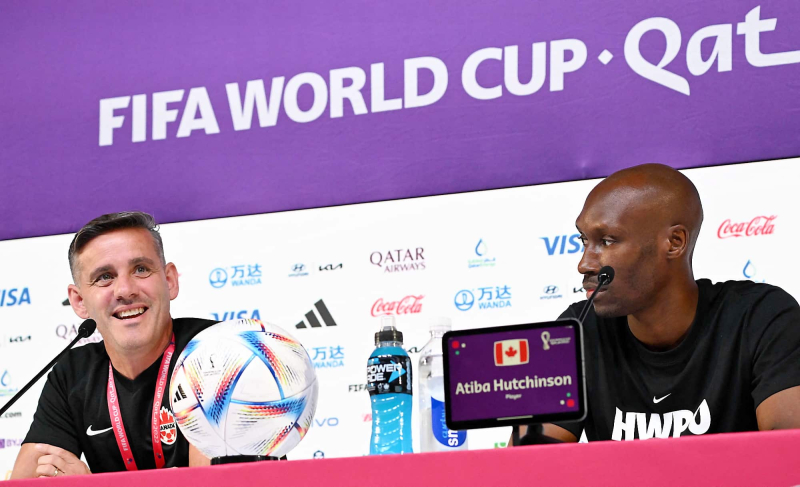 Things didn't go as planned on Tuesday as John Herdman and Atiba Hutchinson arrived a good 40 minutes late for the scheduled press conference at the media center.

You could also read the anger on the tense face of the Canadian coach, who wanted everything to be perfect on the eve of this clash against Belgium, the first game in 36 years at the World Cup for the maple leaf.

Herdman is known for maintaining a very tight management of everything concerning his team; this delay clearly pissed him off. The Canadians were apparently stuck in Doha traffic. At least that's the official explanation.

“The arrival was a bit complicated, but we are making sure internally that it does not happen again”, confirmed Herdman, tightening his arms. teeth.

The coach quietly relaxed and ended up smiling again, especially when he talked about what his presence in Qatar meant to him.

“It's a dream come true for me , the players and the country. We are playing in a World Cup for the first time in 36 years.

“We imagine people at home in front of their TV or full bars cheering us on.

The native Englishman admitted that it took him a long time to see himself in this position.

“When I worked at Sunderland academy, I never imagined I would ever be here. We pinch ourselves and it becomes more and more real with each passing hour. »

Canadian players therefore have the impression of daydreaming. In theory, it should be worrying, but that's not Herdman's opinion.

He also praised the high quality of Belgium, who occupy second place in the world rankings FIFA.

“You can be blinded by the Belgium attack because there is a lot of quality. It's a team that has grown over the last six or seven years.

“They [the Belgians] will adapt faster than us, but we have a certain naivety that can play into our favor because everything is new and we are not afraid. »

It is also the trademark of this formation which crossed the qualification of CONCACAF with a certain casualness despite an impeccable work ethic. It's the sign of a young and confident team.

Belgian coach Roberto Martinez rightly noticed all the qualities of the Canadian team and he spoke about it enthusiastically.

“I have a lot of respect for what Canada did by finishing at the top of their group ahead of the United States and Mexico. It means that Canada has a very good team, it's a very special generation.

“Looks like a very solid and dynamic team that knows its strengths and is very quick.

The Spaniard drew a parallel with his side's first match at the 2018 World Cup in Russia, a 3-0 victory over Panama in a clash more complicated than the score indicates it.

“It was a team that had never played in the World Cup, the players from Panama played liberated, they were not afraid and for 50 minutes it was difficult to find the fault. »

Alphonso Davies will be there

We were worried about the state of health of Alphonso Davies, injured in a thigh, but everything suggests that he will be at his post today even if Herdman beat around the bush a bit.

“He was very clear, he wants to play . The staff help him. He put the throttle all the way down and he got there.

“His enthusiasm can influence me, but you always have to follow medical advice because the player's safety is more important.

“You have to question the risks, but he says he is ready, he flies on the field and we are in a position where we can say that we can put our best team on the field. The dark clouds are gone. »

This last little sentence at the same time suggests that midfielder Stephen Eustaquio, who had complained of stiffness in training, will be in office and that goalkeeper Milan Borjan, victim of stomach aches, will be between the posts.

A big test for all

Canada's first game against Belgium will not be easy for the players with the maple leaf.

After all, this is a duel between the second in the world and the 41st nation in the FIFA rankings.

Either way, John Herdman wants his men to take the opportunity to soak up the atmosphere and gain experience for the next fixtures against Croatia and Morocco.

“ I want the players to enjoy it, but the competition against Belgium will be a big test for everyone, including the staff. We don't have much to lose, it's just an opportunity for everyone. »

You could say that Canada did the right thing to prepare for this game by winning a friendly match against the Japan last week.

The Canadians defeated the Japanese 2-1 in Dubai. Japan are ranked 24th in the world.

“No matter the game against Japan, we believe in what we can do because we have a good team and good players,” insisted the captain Atiba Hutchinson.

“It was just another step in our preparation and we know we can play against the best teams in the world.

Hutchinson may be 39 years old, but he was only 3 the last time Canada participated at the World Cup, in Mexico in 1986.

So it was not there that he began to dream of playing on the biggest stage in the world.

It It was only a few years later that he got the bug.

“I think I realized how big the Cup was in 1994. I was visiting a friend in Brazil and they [the Brazilians ] had won. This is what aroused great interest in me. »