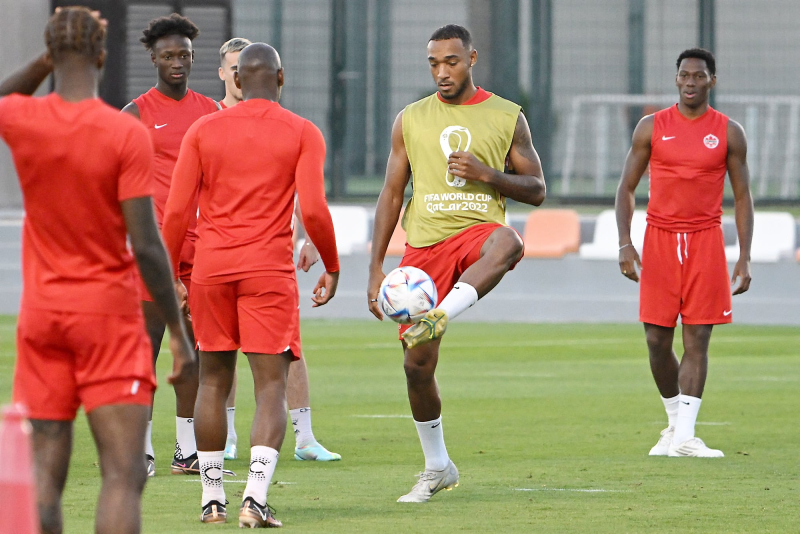 DOHA, Qatar | The World Cup may last a month, but it barely started a week ago and Canada is already playing its all out game on Sunday night against Croatia.

Defeated 1 to 0 by Belgium on Wednesday night, Canada are the only team in group F without a point; a loss on Sunday would virtually mean their elimination.

The Canadians put on an inspired performance that surprised the world against Belgium, but one has to wonder if they'll be able to be as dominant against a Croats cantankerous and intense, especially in midfield.

Coach John Herdman insisted his men had quickly moved on.

“We have to be proactive because there is always another task ahead of us. We leave what just happened behind us. »

So Canada will play its tournament on Sunday, and John Herdman knows it.

This is surely what prompted him to make such a strong statement just minutes after Wednesday's final whistle (see other text).

The coach believes this is the most important part of the tournament for his team.

“It's a huge game and I think it's a moment that will define us. We must prevail.

To prepare his men, Herdman invited them to a film screening. We don't know who brought the popcorn.

“The old me probably would have tried to compensate in the next game, but we have to take the pressure off.

“We reviewed the game against Belgium on Thursday and they saw that they did a lot of good, they saw all the good things they did. We were also able to see the areas of the game where we need to improve.

The players therefore had to see all the good things achieved during the first meeting, although we imagine that they already knew them. But a little positive reinforcement never hurts.

For Canada, the key lies in controlling the midfield. And that won't be an easy task against a team that includes Luka Modric and Ivan Perisic in particular.

Stephen Eustaquio was also a little annoyed when asked to determine if it was the speed in the corridors which could be decisive for his team.

“We know our strengths, some teams will give us space in the middle and others on the wings.

“It's hard to know how things are going to go from game to game. »

Where Canada has a small advantage is that John Herdman analyzed the Croatian way of play at length, which is quite unilateral in the country.

Why? Because his son was already part of the Dinamo Zagreb academy.

“They play a very good 4-3-3. I saw a training session and I couldn't believe the technical cohesion of 12-year-olds.

“It's a whole other level, there's physical involvement and it's definitely helped direct my philosophy.

As games come back quickly, Herdman may well make a roster change or two for this game.

But he was careful not to open his game. The coach is the kind of guy who sits on his cards to make sure the player next to him doesn't see them.

“We have 26 players available and that's what's great. We may need different elements from what we saw against Belgium.

But at least everyone is healthy and ready to play; so that gives him a nice hand.

Croatians didn't play the game they wanted against Morocco

DOHA, Qatar | Croatia worked on it in their first match against Morocco and came away with just one point, the result of a 0-0 draw.

Saturday, the Croatian coach Zlatko Dalic admitted he didn't have the match he expected and often repeated that the game was moved to the afternoon, which didn't suit his team.

“Morocco were a solid team, Canada played well against Belgium. We will have to respond to their game adequately and aggressively.

“We're going to have to be very energetic and much better prepared than in the last game,” he agreed.

It's another sign that doesn't lie that Canada's performance against the Devils reds invited everyone to take the Canadians seriously despite the loss.

Morocco almost achieved a feat by shutting out the Croats. These are used to moving the opposing net.

“We had to be more decisive against Morocco, we didn't manage to impose ourselves,” admitted Dalic, who is scratching his head a little on the identity of his striker for Sunday evening's match.

So Andrej Kramaric might not be the right man. Dalic explained that there has been a good turnover in his squad over the past four years.

“Before, I used to know my starting XI, but I minus nine players in the lead. We have several forwards in our squad, some of them playing very well. I'm confident we'll get the right player.

“In 2018, we had a team that had been playing together for ten years, players from Barcelona, ​​Madrid and elsewhere. We have new players. It is a new team that must produce the expected results. »

A little reminder is in order here. Four years ago, the Croats had scored fourteen goals in seven games until their defeat in the final against France. They even offered themselves a 3-0 victory over Argentina in the group stage. And above all, they had not been cleared once.

It is obvious that we took notes with the Croatians and that Canada will not have the role of minnow in their eyes.

Croatia take nothing for granted for their match against Canada, thanks to their performance against Belgium. The players took part in a final session on Saturday to be ready for the clash.

“Canada is a serious and formidable team that has beaten the United States and Mexico in their region.

“They gave Belgium a hard time with high pressing, they deserved to win much more [than Belgium] in this match,” said Dalic.

This one also did note that surprises have been frequent since the beginning of this World Cup.

“The small teams or the underdogs have good performances, we only have to look at Japan. We cannot rest on our past successes. »

Next to Dalic, Ivan Perisic said little, but threw flowers to the Canadians. He was especially struck by the effort made by the Reds who simply worked harder than their opponent.

“Canada surprised us with the distance covered against Belgium who did not respond correctly.

“We're going to have to be quick and aggressive. We have to play our way. »

In addition, between a stay at Inter Milan and at Tottenham Hotspur, Perisic made a move on loan to Bayern Munich in 2019-2020.

He was therefore in Bavaria when Alphonso Davies made a sensational arrival in the Bundesliga and we understand without forcing ourselves that he has a lot of admiration for the Canadian prodigy.

“He's fast, he's a real miracle. He can constantly improve.

And Perisic threw another bouquet in Canada's court.

“As for the other Canadian players, they played very well against Belgium. I'm looking forward to this game. »