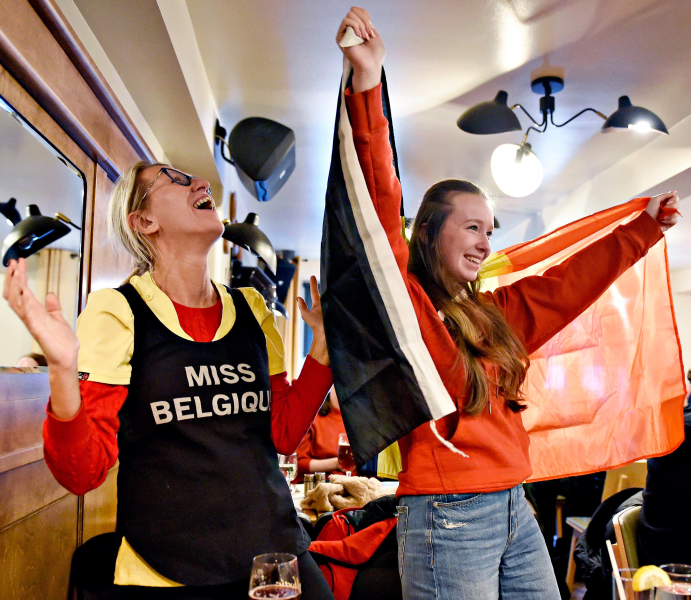 Belgium was hot against Canada and not just on the pitch in Qatar. In Quebec, the assembled Belgians welcomed with a mixture of happiness and relief the only goal of the match, which gave them victory.

The meeting point had been given on Grande Allée, at the Belga Resto-Bar and for long minutes, the tension was much more palpable than the euphoria.

There is nothing like a chilly Wednesday afternoon around pints of beer and fries dishes to spy on the prowess of both countries.

After the many controversies linked to human rights in Qatar, it was finally time to have fun for this match between the native land of the Belgians gathered there and their host country. It's hard to ask for more!

“I'm happy that we're talking a little more about sport again. Players have nothing to do with anything going on there. There are many who talk about boycotting the World Cup and who will spend the next month in front of the TV », joked the owner of the restaurant, Luc Van Steene.

Just like his compatriots, Mr. Van Steene soon found himself on edge. From the ninth minute, when Canada obtained a penalty, the Belgians of Quebec were trembling in unison for their Red Devils. When one of the best goalkeepers in the world, Thibaut Courtois, resisted, the screams of those present reflected obvious stress.

“It's time for them to start playing”, cursed Mr. Van Steene pointing to the representatives of the flat country.

Although the Canadians dominated the first half, Michy Batshuayi's goal in the 44th minute sparked hysteria. Many sighs of concern were heard afterwards, but the Belgians resisted.

Luc Van Steene had an easy smile after the Belgium goal.

On site, despite the competition, there was no animosity. The most tangible proof of this good-natured atmosphere came from the couple formed by Béatrice Delplanche and Claude Robillard, a Belgian and a Canadian.

“I have lived here for 22 years, but I will always be Belgian. It still bothered me because I wished Canada could have a better chance than falling to us. I was scared and if Canada had won, I know someone who would have had a bad night,” she chuckled, turning to her husband.

“I find it nice what's happening,” replied Mr. Robillard on the fact that the two countries were facing each other.

“It's still disappointing for Canada, which has not yet never won at this tournament. »

For Luc Van Steene, it was happiness since he believes, like many observers, that the window is closing for the Belgian team.

“This is the last chance for this golden generation. They say they are the oldest team in the World Cup, but at 31, are we really old? I'm 54 and I'm not! ,” he laughed.

“For Canada to continue to rise, it would take an overhaul so that the national team can face better clubs than those in CONCACAF. At least, the expatriate players in Europe will help the team and become role models for young people , believes the one who has lived in Quebec for 14 years.

Sign that the Belgians still feel good at home here, Béatrice Delplanche summed up the ambivalent emotions after the victory well.

” Now that we have three points, I say to you Go Canada! “