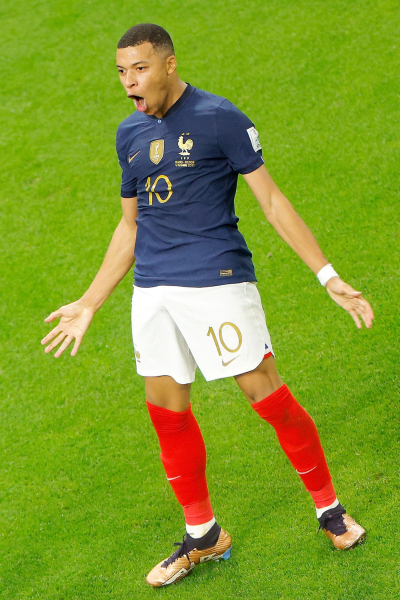 DOHA, Qatar | Kylian Mbappé had two goals and an assist and Didier Deschamps hinted he was not at the top of his game. Imagine that!

“Kylian talks with his feet and he talks very well with his feet. He is one of the outstanding players. And today, even though he was not in the best mood, he showed that he can change the game with a kick.

Mbappé, who is on a mission, followed Deschamps in front of the media, he who had not yet met the press since the start of the tournament, which he had been accused of. But a fine of 10,000 Swiss francs ($14,350 CAD) changed his mind.

“I didn't speak because I needed to concentrate 100% and that's why I didn't want to introduce myself. I will pay this fine personally. »

We also note that Mbappé and Olivier Giroud already have better statistics than at the World Cup in Russia four years ago. We remind you that the French played the maximum number of matches four years ago when they won the tournament.

“One needs the other even if Kylian can make the difference all alone,” Deschamps explained.

The French coach also took the opportunity to highlight the record achieved by Giroud.

“Olivier has always been an important player. He's had tough times, but he's been rewarded. He has often been decried, but he is mentally solid.

“Scoring so many goals at international level, I say bravo to him and his longevity. »

The victory was satisfying for Didier Deschamps who still noticed flaws.

“The opponent gave us a hard time. In its status as a France team, it is normal that we beat Poland, but we had a bad start to the match in the first twenty minutes, we had a slack. “

It was when he made a tactical change that things started to go better.

“In the second half, the repositioning of Antoine Griezmann allowed us to widening the field because in the first half there was little action from Ousmane [Dembélé]'s side, which means that Kylian is more watched. »

Polish coach Czesław Michniewicz said almost everything in his opening speech when he appeared at the press conference.

He he also mentioned that despite the defeat, his team had achieved their goal.

“We got past the group stage and that was our main goal. It's been 36 years since we did that.

“We played the current world champions and they played a very good game. »

Michniewicz believes the game could have taken a different turn if his men had been able to score earlier.

And precisely, as the French took the lead at the very end of the first half, we were treated to a change of attitude when we returned from the locker room.

“After the break, the French were calmer and we became more nervous. We had chances to score”, supported Michniewicz who threw flowers to the player of the match.

“[Kylian] Mbappé scored fantastic goals. No coach has yet found the strategy to stop him. I think He's going to take over from [Lionel] Messi and [Cristiano [Ronaldo] and be the big star for the next few years. »

The Polish media was a bit harsh on Robert Lewandowski who scored two goals during the tournament and who missed a penalty shot.

Michniewicz declined to comment on the 34-year-old veteran's future with the national team. On the other hand, he defended himself about his performances.

“Robert has fewer goals, but we are not playing against Andorra or San Marino. Maybe against them he would have scored five goals. »