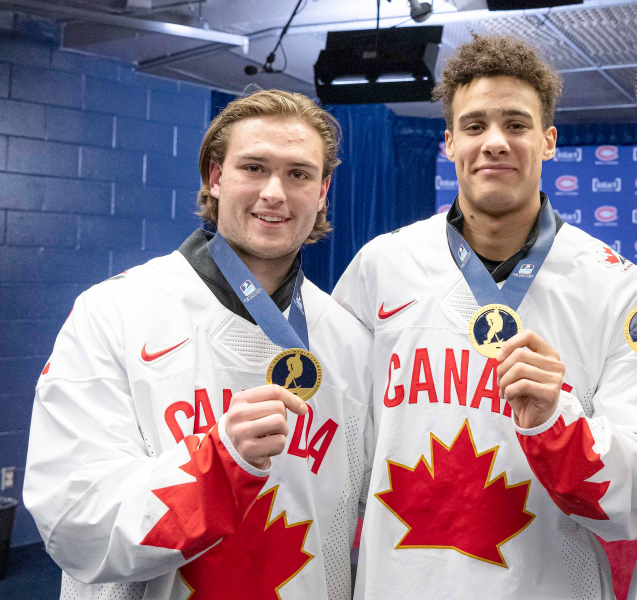 During minor hockey, defenseman Tyson Hinds and forward Joshua Roy had a bit of a rivalry. However, this situation has turned into a beautiful friendship over the past few years.

Earlier this month, they won gold with Junior Team Canada. Both have contributed in their own way to this conquest.

“Before I was traded to the Sherbrooke Phoenix, he was an acquaintance, explained Tyson Hinds of Roy. We hit it off right away.

“Then this year it exploded. We are often together. It is truly exceptional to have been able to win the gold medal with him. »

From the pee-wee ranks

For For his part, Roy is happy to have been able to count on Hinds as a teammate with the Canadian team. A victory that will bind them forever as athletes and as people.

” We often played together on the Quebec teams, underlined one of the heroes of the dramatic victory against the Czech Republic . When we played each other in minor hockey, we weren't really friends.

During their first confrontation in pee wee AAA, Hinds wore the colors of the Intrépide de Gatineau while Roy was playing for the Élites de Beauce-Appalaches.

Hinds also has a bad memory of one of his confrontations against Roy in the Bantam AAA.&nbsp ;

“He was good in those days too,” Hinds said. We were leading 4-1 in a tournament final with five minutes left in the game.

“With Olivier Nadeau, Josh orchestrated a comeback to tie the game before winning in extension. I still have it in my heart and Josh still jokes about it today. »

The two friends have one last mission in the QMJHL: to win the President Cup with the Phoenix. The fight looks tough. They will try to use their experience acquired with Junior Team Canada.

” We went through a lot of adversity in that tournament,” said Roy. We played two games in overtime and there was a lot of pressure. It's just that we have to stay calm and united if we face adversity. »

« We have the team to go far and we will have to be ready for anything, a added Hinds. It is hard work, hard work and determination that will make the difference. »