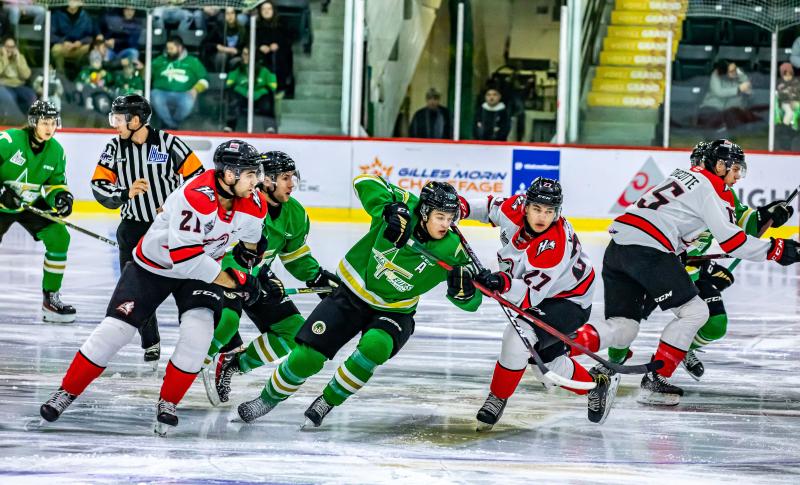 The Val-d'Or Foreurs won the first set of the 117 battle of the season, Monday at the Agnico Eagle Center, by defeating the Rouyn-Noranda Huskies 3 to 1.

Keeper William Blackburn shone in the win, stopping 28 of the 29 pucks he faced. He only gave up on one of the 13 shots he received in the first period, a success from Bill Zonnon, which tied the game 1-1.

Offensively, the Foreurs took the lead for good by virtue of a two-goal streak in 34 seconds, all on the power play, in the third period. Alexandre Doucet first took advantage of a man advantage, due to a major penalty that Jérémie Minville received for having given the band, in order to give the lead to his team. Then, Charles-Antoine Beauregard took advantage of the same numerical advantage to double the Foreurs lead.

Frédéric Potvin got the other success of the winners, while defender Félix Paquet was an accomplice of two goals.

Elsewhere in the QMJHL

In Rimouski, the Océanic hit the target three times in the third period to extract a 4-2 win from the Victoriaville Tigres.

In Drummondville, Baie-Comeau Drakkar defender Niks Fenenko shook the ropes twice in the third period to force overtime, but the Voltigeurs eventually won 5-4 after the shootout.

In Charlottetown, the forward Keiran Gallant was instrumental in three of his team's five goals and the Islanders triumphed 5-2 against the Acadie-Bathurst Titan, who still managed 38 shots on the net of goaltender Francesco Lapenna.

In Gatineau, forward Charles-Antoine Lavallée was the most productive player for the Olympiques, with two assists, while the latter lost the Shawinigan Cataracts 4 to 2.