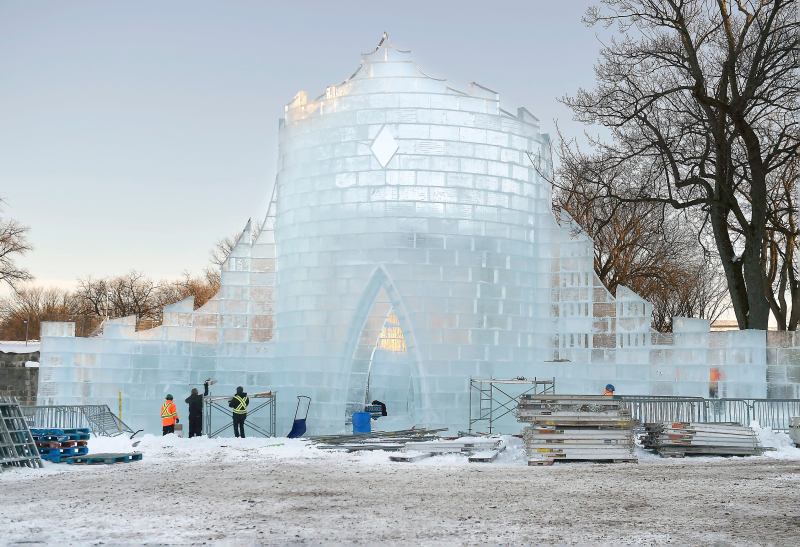 Preparations are well under way for the 69th edition of the Carnaval de Québec as the Palais de Bonhomme, which will be one of the tallest in the history of the event, is already erected in place of the National Assembly.

“We realized over the years that a height of about 45 feet for the central tower, like this year, is approximately the maximum that we are able to build”, explains Charles André Paris, director of operations of the Carnaval de Québec.

” Beyond 45 feet, it would probably be necessary to raise the blocks to the crane, he adds.

Once again, the construction of Bonhomme's house has been entrusted to the company Sculptures Michel Lepire, which has been associated with the Carnival from father to son for thirty years.

A total of 2,800 blocks of ice weighing 200 pounds each were needed to erect the imposing infrastructure. “It's about fifteen people who will work more or less 15 days to erect the Palace”, mentions Mr. Paris.

Remember that the tradition of a palace where Bonhomme is housed is as old as that of Carnival. The first of its kind was built in 1955 and was located at Place D'Youville.

As of Monday, workers and land surveyors will focus on installing new infrastructure, the Event Dome, a 60 ft by 80 ft megastructure that will take place in the backyard of the Palais de Bonhomme.

Shows, including those by Matt Lang, Koriass and Ariane Moffatt, will be presented on the Loto-Québec stage throughout the festivities from February 3 to 12.

Other sites include Camping de Bonhomme, which replaces Camp in Jos this year, and Glisse urbaine, a 500 ft tube slide long at Place D'Youville, remains to be erected.

“ For the slide, the construction of the scaffolds is almost complete. This week we will have the chance to have the structure finalized “, said Charles André Paris with pride.

He admits that the snowfall last week was very beneficial for the final blitz preparations.

The organizers were also worried about the mild temperatures at the beginning of January.