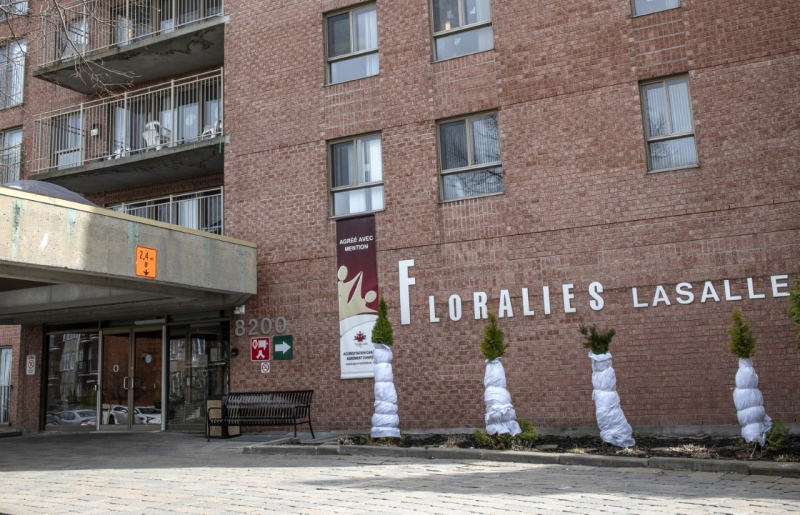 In the midst of a labor shortage, the health network had to deploy the equivalent of 160 employees and “urgently” hire a manager at $150 an hour to take care of two private residences for seniors under supervision since the beginning of September.

Quebec had to take charge of the Floralies de La Salle and Lachine residences, because they “seem to indulge in or tolerate situations likely to compromise the health or well-being” of residents, can we read in a letter signed by the Minister of Health, Christian Dubé.

These two residences belong since 2019 to a French giant of residences for seniors (see below). Of the approximately 330 residents who stay at the Floralies, the care and services of 214 of them are paid for by the State under special agreements, according to network data.

According to our information, the situation at the Floralies is so precarious that the CIUSSS in the region had to urgently dispatch and at their own expense approximately 100 resources from the public sector, and 60 others hired through private personnel placement agencies, learned our Bureau of Investigation.

The Minister for Health and Seniors, Sonia Bélanger, will also provide an update on the situation at the Floralies during a press conference on Thursday afternoon.

This urgent situation then arises that Quebec's healthcare establishments are in critical need of manpower.

This supervision is the first to be imposed under the new law against elder abuse, piloted by former Minister Marguerite Blais and adopted last April.

The network also had to hire a manager at a high price to oversee the Floralies, we learned.

Indeed, the CIUSSS de l'Ouest-de-l'Île n had “neither the resources [nor] the sufficient expertise” to manage the two residences, can we read in contractual documents.

The health establishment thus set its sights on Sophie Boulva, who will receive $153,300 for a period of 24 weeks, with an hourly salary of $150.

Another contract worth some $75,000 was awarded to Alexandre Mercier to deal in particular with “the application of schedules” at the Floralies, a “complex” issue, indicates another contractual document.

Despite the large sums invested – several million dollars, in particular in compensation for employees mobilized on an emergency basis – the MSSS has no guarantee of seeing its money back. “There is not an article in the law which specifically says that the costs must be reimbursed [to the CIUSSS]”, recognized the Ministry of Health, which is thus counting on the good faith of the Floralies to pay the bill.&nbsp ;

As for the sums paid to the Floralies to take care of patients in the public network, the provisional administration “does not have the power to change the contractual agreements made with the CHSLD Floralies”, indicated the Ministry of Health. So much so that at present, the Quebec State continues to pay for the places purchased in the two residences.

The president and chief executive officer of the company that owns the Floralies, Benoît Lellouche, did not respond to our interview request.

A French giant behind the residences

The Floralies residences are the property of foreign interests, namely the French group Vivalto, some of whose ramifications extend to in the Middle East.

According to research carried out by our Bureau of Investigation, the Vivalto group, one of the largest players in France in accommodation for the elderly, is notably financed by a State company of the United Arab Emirates (UAE). &nbsp ;

Indeed, the investment firm Mubadala, based in the capital Abu Dhabi and of which two of the directors are UAE ministers, has invested millions of dollars in Vivalto since 2015.  < /p>

Vivalto and its founder, Daniel Caille, are leading the way in Europe in private hospital care and for the elderly. One of the subsidiaries of the French group has no less than 49 health establishments on the Old Continent. As for Mr. Caille, his personal wealth places him 232nd as to the richest people in France, according to the economic magazine Challenges.

The French group has been making headlines for the wrong reasons over the past few years. Last June, employees of a residence for the elderly in Nouvelle-Aquitaine, belonging to Vivalto, said they had been forced to mistreat residents because of the lack of staff and equipment, according to the daily La Nouvelle République. .

A year earlier, doctors at a Vivalto clinic in Normandy deplored the lack of human and material resources in their practice, which would have contributed to the suicide of a doctor emergency doctor, according to the local newspaper La Dépêche.

In Quebec, the group has owned a third establishment since last July, the Manoir St-Joseph, located in the Ahuntsic district of Montreal.

But even before the acquisition of Floralies by Vivalto in 2019, these two residences already enjoyed an unenviable reputation in the health and social services network. They have been the subject for more than a decade of reports deploring the living conditions that prevail there. This has not prevented public establishments from continuing to buy places there over the years.

Illegal restraint, poor quality of care, abuse; the criticisms of which the Floralies have been the subject since 2005 are numerous. In April and May 2020, the army even had to be deployed to the Floralies Lasalle and Lachine to compensate for the lack of personnel.