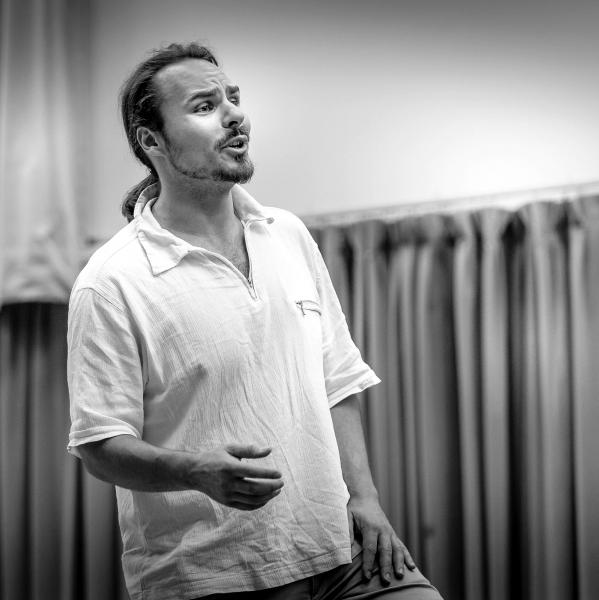 Even though he knows the role of Faust well, Thomas Bettinger still faces a new challenge with this work by Gounod at the heart of the 11th > edition of the Quebec Opera Festival.

The French tenor personified Faust in France in 2017 and 2018. Four years later, he reunited with this tormented man who decides to sell his soul to the devil.

“I haven’t played this role for several years. I have since approached other repertoires which have made my voice and my vocal gesture evolve”, he indicated, referring to those of Andres (Wozzeck), the Duke of Mantua (Rigoletto), Don José (Carmen), Benjamin Franklin Fullerton (Madame Butterfly) and Alfredo Germont (La traviata), which he has played and sung ever since.

Thomas Bettinger's challenge is to rediscover his marks of 2018, while keeping those he acquired.

“It's to find those where I was comfortable, without entering in conflict with what my voice has become. It's a more technical voice management challenge,” he explained.

There are also other challenges associated with the role of Faust for the 37-year-old tenor, who will perform for the very first time in North America.

“There are many of them, he said, adding that it was a demanding role with great and beautiful passages, a very expected air and which requires endurance”, he said. find out, during an interview.

Shown on July 29 and 31 and August 2 and 4 at the Grand Théâtre de Québec, in a modernized version, Faust tells the story of a man on the verge of ending his life who chooses to sell his soul to the devil.

“He feels a huge sense of emptiness and failure. One imagines an old virgin man who, at the last moment, asks the devil to make him discover the pleasures of the flesh, and these pleasures will be a source of misfortune, ”he said.

Thomas Bettinger likes in Faust the evolution of the characters, the color of the music and a work which becomes larger and larger, more and more dark and more and more intense.

“There are great dramatic passages in the theatrical sense. There is a search for catharsis by putting on both farce and drama. It's extremely gripping and very intense,” he noted.

Baritone William Desbiens will sing in the city where he grown up, in the role of Wagner.

After making his professional debut as Fiorello last summer in the Opéra de Québec's The Barber of Seville production, baritone William Desbiens will slip into the skin of Private Wagner, whom he describes as a teaser.

“He is a leader, but a leader of the party. It's the energy of the evening,” he said.

This time, compared to the Barber of Seville offered on webcast, there will be an audience in the room.

“It makes me happy to finally be able to be heard by people in the city where I grew up, and other than by video. Singing in front of an audience makes all the difference,” noted the young singer, who was one of the nine finalists in the 2022 edition of the Paris Opera’s Ciopera competition.

With soprano Geneviève Dompierre-Smith and pianist Jean-François Mailloux, William Desbiens is part of the Brigade lyrique, which will offer free, every lunchtime throughout the Festival, famous opera arias.

“I look forward to working with Geneviève and bringing the opera to real life in places in Quebec and everywhere,” he said.

Baritone Dominic Veilleux, mezzo-soprano Rachèle Tremblay and Jean-François Mailloux will do the same with excerpts from operettas, at 5 p.m. and 6 p.m.

The list of places visited is online on festivaloperaquebec.com.

♦ The Merry Widow will launch, this Sunday evening, at La Bordered, the 11th edition of the Opera Festival. There will also be performances on Tuesday and Wednesday.

Some outings from the Brigade