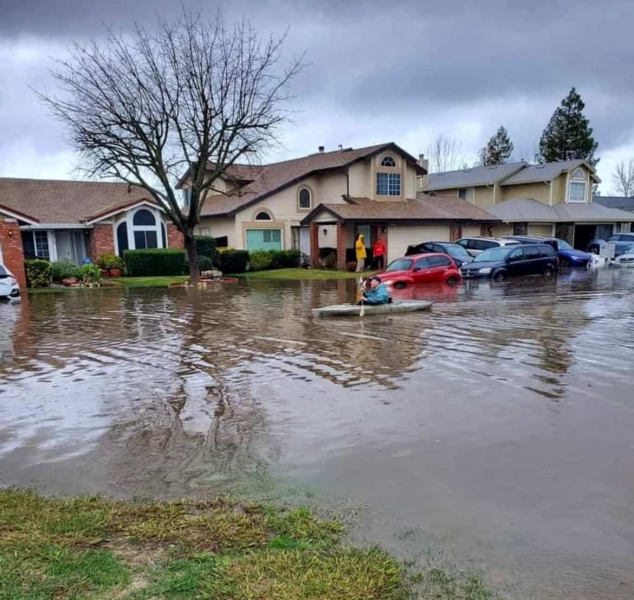 Quebecers who have been living in California for several years notice that climate change is raging more and more often and intensely, like the torrential rains of the past few weeks.

“It two days ago, my yard was a river, I couldn't take the dog out because there was so much water, ”says Nelly Pereira, from Sacramento, a two-hour drive from the bay.

La Lavalloise moved to the region for love five years ago. She had never seen so much water in this American state rather known for its droughts.

“On my street, the cars were covered with water up to half people couldn't leave the house. People were kayaking. It was intense,” says the one who works as a sports trainer from home.

This creek, near San Jose, is normally just a thin trickle of water.

Successive storms and downpours have killed 19 people and caused flooding in several places in the most populous state in the United States.

“It has been raining every day for four weeks”, drop Lisane Drouin, discouraged

The occupational therapist originally from West Montreal has lived in Silicon Valley for more than 25 years. She says that in as many years, she and her patients have seen the temperatures change.

“It is much windier than before. We have more and more violent winds and that, with the torrential rains that we had, I call it the fifth season of California, ”explains the health worker.

She lists in English the four typical seasons, according to Californians: earthquakes, wildfires, landslides and droughts.

From extreme to extreme

“These are very short seasons. We can also say that there is summer and winter,” jokes Christian Plante, who lives in San Jose. He moved from Quebec in 2000 to work in electronics and is also seeing the effects of climate change.

In San Jose for more than 20 years, Christian Plante notes that heat waves are increasingly intense in the summer.

“When we got there, weeks at 40°C, we had a couple a year, now it's for several weeks, to the point where it becomes unpleasant”, describes the 50 years old.

He adds that in the summer of 2020, the heat waves were so intense that the air was “stale” for weeks due to forest fires.

The heavy rains that have hit California in the past few weeks are just a taste of the effects of climate change that North Americans are expected to experience in the future, according to an expert.

“We are going to experience major changes in precipitation patterns with intensities that will increase, especially for short periods,” worries Philippe Gachon, professor and researcher in hydroclimatology at UQAM.

The climate change specialist explains that California is one of the vulnerable regions of the world to the arrival of heavy rains, due to its geographical location, near the Pacific Ocean, and its mountains, which promote runoff.

The most populous state in the United States has experienced significant droughts and heat waves in recent years. California is also regularly affected by wildfires.

With global warming, this syndrome of “excess and shortage of water” risk of reproducing and challenging infrastructures such as drainage systems, which are not designed for such high intensities in such a short time, underlines Philippe Gachon.

California isn't the only region in North America affected by extreme weather events.

“ The western part of the country experienced the coldest temperatures in the 30s or 40s. ;last years “, underlines Philippe Gachon, who recalls that the mercury has dropped to -35 °C, even -40 °C in certain areas of British Columbia and the west coast of the United States in month of December.

Nova Scotia has received its dose of rain and sleet since the start of 2023.

Mr. Gachon goes so far as to say that North America is one of the regions of the world most affected by climate change.

” Canadians and Americans are under- estimate the magnitude of the changes we are going to experience,” insists the expert. 'water. “There is no other equivalent in the world. In Europe, there are no tornadoes or tropical cyclones. In Asia, yes. But in Canada, we break the record in terms of freezing rain and snowstorms”, he illustrates.