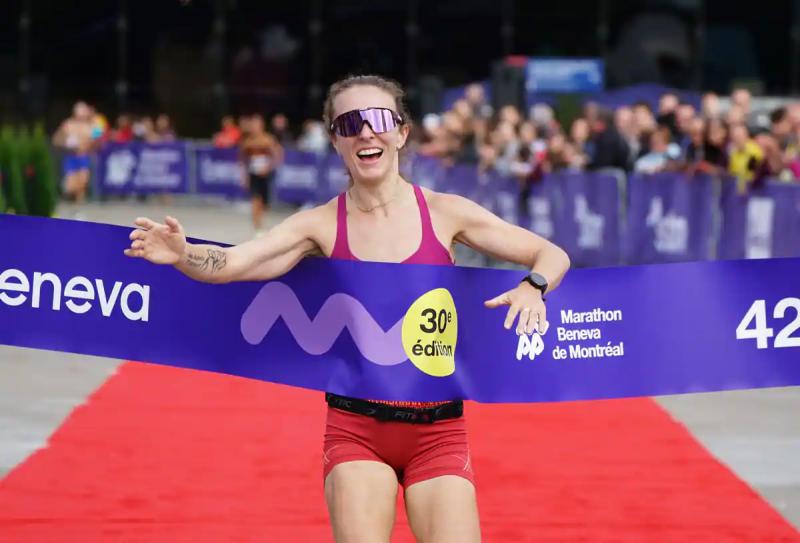 At the end of an edition of the Montreal Marathon “successful all along the line” according to its organizers, two Quebecers have particularly distinguished themselves with their results.

Sherbrooke resident Mélanie Desautels was the first woman to cross the finish line. She completed her 42.2 km race in 2 h 53 min 02 s, a time slightly faster than her personal best set at the Marathon P'tit Train du Nord.

“Frankly, I don't really did not expect that, she let go a few seconds after being crowned. I started training seriously in 2019. The idea was just to improve my times.

“There, winning the Marathon de Montréal, it's… I'm a bit emotional.”

The participants questioned were unanimous at the end of the race. The route of the 2022 edition allowed you to see some of the most beautiful landscapes of the Quebec metropolis and included an interesting level of difficulty. Author of a time of 2:24:26 – good for the first rank among the representatives of the Belle Province –, Maxime Leboeuf praised the merits of the course.

“Marathon runners are always looking for the fastest course at all costs, but here it's a mix of good looks and a relatively fast course, noted the 35-year-old Quebecer.

“Primarily, I believe all runners think the first 10, 15 kilometers are really beautiful. There are climbs, but that's the charm of the course too. It's a great challenge.”

Like Leboeuf, Mélanie Desautels underlined the complexity of the course, which presented her with an interesting challenge in terms of her preparation.

“I would compare it, in terms of difficulty, to Boston. But this one, there are ribs all over the place. I'm very, very happy with my race management though.”

Ethiopia's Gadisa Shumie was the fastest on Sunday. He crushed the competition with a time of 2:09:24, almost 13 minutes ahead of his nearest pursuer.

As the first athletes descended on the Esplanade of the Olympic Park, the President and CEO of the Marathon, Sébatien Arsenault, was overjoyed.

“I must say, hot, it's a success on all fronts. Everything is going really well, except there wasn't enough blue [in the sky] in the morning. Other than that, it's only positive.”

The one who also oversees the Grands Prix Cyclistes de Québec and Montréal has a specific objective for the 2023 race: to raise the level of competition.< /p>

“Since COVID, many people have had difficulty obtaining passports and visas. So we brought back the elites in a rather timid way for clear reasons.

“Our desire is to activate this from 2023 and bring back a fine peloton of men and women to our country.”

A moment of concern

An event has unfortunately overshadowed this edition of the Montreal Marathon. A half-marathon participant was rushed to a hospital after suffering a heart attack around 10:05 a.m.

“She was quickly taken care of by the organization's medical team and the [paramedics] of Urgences-santé. She was resuscitated at the scene and transported to the event clinic, where her condition was stabilized, said Dr. François de Champlain, medical director of the Marathon.

“She was then transferred to a hospital center in Montreal, where further investigations are underway. His condition is considered stable and there is no fear for his life.”

According to a spokesperson for the event, the victim of the illness was doing well at the end of the afternoon.

Since the death of young man Patrick Neely in 2019, the organizers of the Montreal Marathon