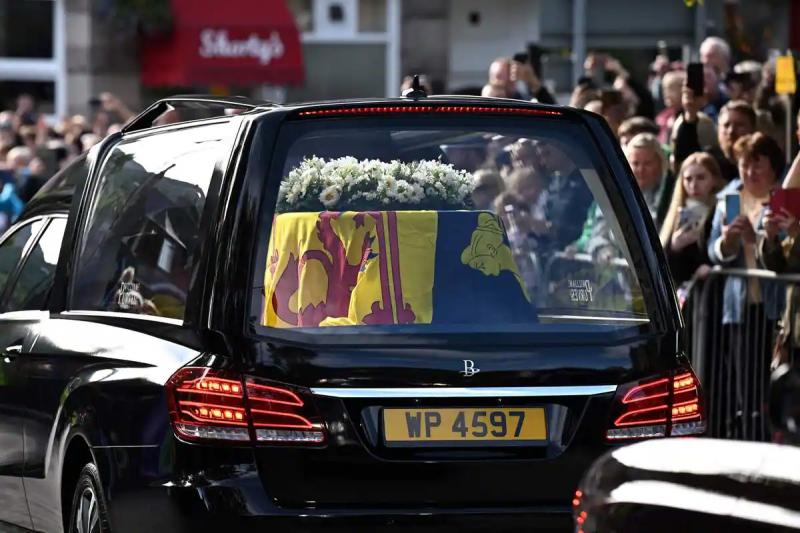 Queen Elizabeth II began her final journey on Sunday, her coffin leaving Balmoral Castle for Edinburgh, ahead of her solemn return to London on Tuesday and her state funeral on September 19.< /p>

The royal hearse, first in a procession of seven vehicles, passed through the gates of the residence where the monarch so loved to spend the summer shortly after 10 a.m. (5 a.m. Quebec time) by road.

The oak coffin was covered with the Scottish royal standard on which had been placed a bouquet of flowers. He is due to arrive in Edinburgh, the Scottish capital, around 4 p.m. (11 a.m. Quebec time) after a trip of nearly 300 kilometers. He will spend the night there at the Palace of Holyroodhouse, the Scottish royal residence.

Thousands of people were expected on the course. Some had arrived very early, to greet for the last time the one who had reigned for 70 years and 7 months, a familiar and reassuring presence, but still mysterious, having crossed eras and crises imperturbable.

“I had to come to Balmoral,” says Mark Lindley-Highfield, a 47-year-old academic who arrived on Saturday from Inverness, a two-hour drive north. For the occasion, he wears a black tail coat and a top hat. “Her Majesty has selflessly given her life and time to us. Paying homage to her in a traditional way was a way of thanking her for all she has done.”

The crowd was asked not to throw flowers as the convoy passed, so as not to disturb the precise layout of the last trip of the 96-year-old sovereign, much loved in the United Kingdom.

The hearse then passed through Ballater, the village very close to the castle, where the queen, who had come to Balmoral since childhood, was very well known. In the main street, the coffin was welcomed by a guard of honor formed by the gathered crowd.

Protected by the immensity of the royal domain (more than 20,000 hectares of moors, forests and agricultural land ) she lived a simpler and more relaxed life there.

The funeral procession then set off for Aberdeen and Dundee before reaching Edinburgh.

His funeral will take place on September 19 at Westminster Abbey in London, a mecca for royal weddings, coronations and burials ever since. almost a millennium.

It was there that the still only Princess Elizabeth had married in November 1947 to 21-year-old Philip Mountbatten. This is also where she was crowned on June 2, 1953.

Dignitaries from around the world are expected there for the funeral, including US President Joe Biden, French President Emmanuel Macron and Australian Prime Minister Anthony Albanese, as well as many royalty.

Tens of thousands people should also pay their last respects to him at the Palace of Westminster, where his coffin will rest from September 14 to 19, before being transferred to the Abbey, where the funeral will take place at 10:00 GMT on the 19th, declared a public holiday in the Kingdom. Kingdom.

King Charles III was proclaimed king on Saturday in a centenary ceremonial ceremony.

“My mother's reign was unequaled in its duration, her devotion and her devotion (…) I am deeply aware of this great heritage, of the duties and the heavy responsibilities of sovereignty, which are now transmitted to me”, has he said.

“In assuming these responsibilities, I will strive to follow the inspiring example that has been given to me,” he continued.

Her son William, now heir to the throne and Prince of Wales, paid a moving tribute to his grandmother.

“She was by my side in my happiest moments. And she was by my side during the saddest days of my life. I knew this day was coming, but it's going to take time to get used to the reality of life without Grandma, an “extraordinary queen,” he said on Saturday.

“I will honor his memory by supporting my father, the king, in any way I can.”

The prince then created a surprise by going with his wife Kate, but also his brother Harry and his wife Meghan to admire the flowers placed in front of Windsor Castle in tribute to Elizabeth II, where the highly acclaimed quartet took a long bath. crowd.

The two couples are notoriously cold. While Harry and Meghan are now settled in California, they had not been seen together in public for over two years.

They all drove off in the same car, but faces were closed, minimal interactions.

According to the Times newspaper, it took “expanded negotiations” behind the scenes between the two sides, delaying their appearance by 45 minutes.

< p>Increasingly frail in recent months, the Queen has devoted her life to the monarchy. On Tuesday, she was still working, receiving in audience the resigning Prime Minister Boris Johnson, and the new Prime Minister Liz Truss, whom she had asked to create a new government.

The monarch, however, remained at Balmoral to these audiences, too weak to travel.