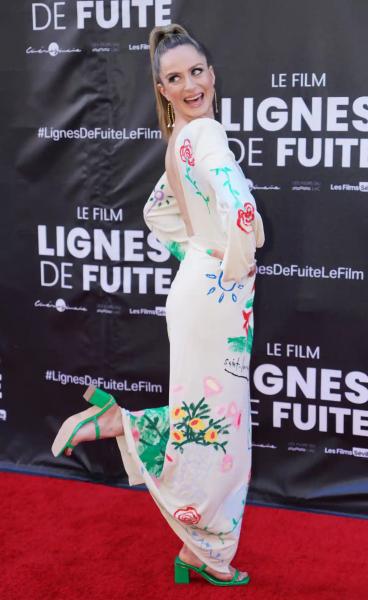 An artist is defined by his ability to express a vision of the world, and Catherine Chabot manages to do so fully thanks to Lines of Flight, her play which becomes a feature film in which she plays with Mariana Mazza and Léane Labrèche-Dor. The anxieties of life, friendship, the state of the planet that we will leave to future generations, everything goes there. Catherine Chabot confided in all her questionings.

Catherine, how did the initial idea for Vanishing lines?

I was very involved in the student strike in 2012. Ten years later, I am much less intense than at the time. I was chatting with friends and we were wondering what was left of this movement, if things had changed, if young people made a difference at the time… I wanted to take the political pulse of what was happening among people of my generation. I wanted to see if we have the same political ideas as our parents, if we are in the same commonplaces, and how we position ourselves as we age. I wanted to know if we were as different as we thought from the generation of our parents and the one before. My answer is that the more it changes, the more it stays the same.

The girls in the play have a lot of questions. Is it also a trait of your personality?

My contemporaries, the spirit of the times and my anxieties inspire me a lot. I also went to tap into my personal anxieties. It was like a kind of therapy. At the time of writing, I was also in my early thirties and wondering if I wanted children, if I was meeting my expectations and those others projected onto me, if I was where I wanted to be. in my career… I find that turning 30 marks the time to take stock, especially for women, because we only have a decade left to have children. Lines of Flight was a catalyst for all these questions. But I don't give an answer, I expose several points of view and each of the characters embodies a way of seeing, brings an answer. Of course, no one is right and no one is wrong.

In taking up this text to adapt it to the cinema, did you find your own answers?

The question of the children is closed, my little girl is 15 months old, my answer is clear. For the rest, I think that all these questions are the same as my mother had. Each decade of life brings specific questions. The film is for everyone, because these are three women who are going through major stages in their lives, and everyone can identify with that. Inside us, there are plenty of possibilities, and life leads us to take this or that avenue. ButLines of flightteaches us that there is always a way to grasp an aspect of our personality that will give us the impetus to change our course.

Why do you have so many questions in your opinion?

I've always been like that. In fact, my father fell ill when I was four years old. There has always been a kind of fear of death, and therefore an urgency to live. I have always asked myself questions about life, about how I want to live, how to live well, about what I want to do with my life… Fortunately, my father is still alive. He fell ill at the age of 28, and after 10 years he finally had a heart transplant. This year, we celebrate his 20th anniversary as a transplant recipient. He is now 57 years old and he is quite fit, despite all the life consequences that a transplant entails.

Were you worried that his heart problem was hereditary?

This is a question that I have been asking for a long time. My brother and my sister also ask themselves a lot of questions, they are very sensitive and porous to the world. Our father's story has really influenced our way of life, our sensitivity to the world, adding a little excitement to knowing if something is hanging out at us. But we finally all saw the cardiologist and our hearts are healthy, at least for a little bit!

The movie Lines of Flightis also a story of friendship, that of three women who meet again. What place does friendship hold in your life?

My best friend is a friend from high school, we grow together.

We have the same type of thought. She is currently studying for a doctorate in British Columbia; she is the philosopher behind the concept of Lines of flight. She worked a lot on the work of Gilles Deleuze. She feeds me a lot intellectually. But to bring all the political issues I wanted to talk about in the film, I needed a common point, and there is nothing better than a group of friends to embody different poles. One of the things that worries me a lot right now is the polarization of society. We are more entrenched in our positions than ever, and I wanted to embody that in a trio of friends. At the same time, I wanted everyone to have their own angle. There is the one on the left, which is selfish; the one on the right, which is extremely generous, and the silent majority in the middle, which says nothing.

Do you have that kind of relationship with your best friend?

No, because we see each other on a regular basis. With Marie-Sophie, we evolve at the same time, we go through the same kind of period at the same time. We follow each other in our questions, in our breaking points. She currently lives on a sailboat in the port of Victoria, she is a great intellectual who will change the Quebec of tomorrow. Remember her name: Marie-Sophie Banville.

Your daughter, Josephine, is only 15 months old. But you have worked a lot in the last few years. How did you negotiate the work-family relationship?

I am extremely lucky to have an extraordinary boyfriend, who is unfailingly supportive. First, he cooks at home, and he was on paternity leave for nine months. I took three months, and then I started working again. Nicolas was very present afterwards. Every day he came to the film sets so that I could breastfeed my daughter, and in the evening he waited so that I could bathe and breastfeed before bedtime. Without him, I couldn't have done this…nor without the help of my mother and my mother-in-law, who helped us a lot.

Is it that your boyfriend works in the industry too?

Not at all! Nicolas is a carpenter-joiner and therefore works in the construction industry. His decision to take paternity leave was very well accepted in his community. His colleagues even made him a starting BBQ. Mentalities are changing a lot, they are all guys his age and they were very happy for him. He even went to visit the construction sites with the little one during his leave.