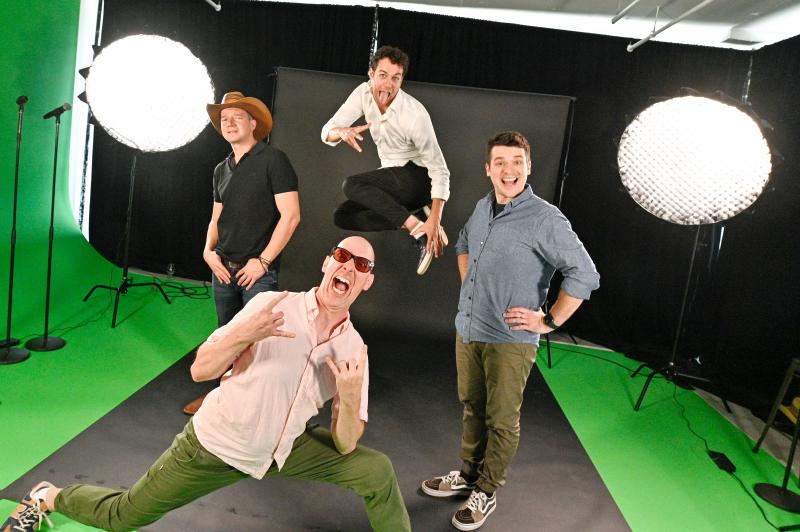 For ten years, the group QW4RTZ has combined humor, pop music, classical discipline and a capella singing in a surprising and unique way. Guided by the mentor of their debut – the director Serge Postigo – the four mischievous singers are preparing a new show. Dubbed A Capella Heros, it will be presented across Quebec in the fall and premiered in Montreal on November 23.

The four members of the group QW4RTZ had invited us to a very special rehearsal in their local Montreal. An intimate performance that would, in just a few notes, make us understand why the group is on its fourth tour of shows in Canada and its beautiful decade of existence.

“We like to play with people's emotions,” they said, sharing smirks. And that's exactly what the classically trained Trois-Rivières singers do when they deliver their version of Tous les cris les SOS, Summer of 69 or even incredible Bohemian Rhapsody, a piece “offering them a vocal challenge every minute”.

The row of numbers as well as the theatrical side of this upcoming show – the biggest of their careers – should particularly please the spectators, believes François Pothier Bouchard. The fact that this one is anchored in the hour of balance sheets and the chances of life too, while the band uses the famous “multiverse” of superheroes (kinds of parallel universes where anything can happen) to take a host of possible directions.

A “multiverse” of possibilities

“One wonders what would have happened if…”, continues the tenor. The show is also inspired by video games and the game Guitar Hery. We mix a capella with the concept of the game. In fact, the genesis of this show comes from our last Christmas album on which we had made inter-songs, original compositions of about thirty seconds where we put our favorite Christmas recipes to music (laughs). A kind of stylistic exercise that we really liked, so we come up with our first original compositions.”

By temporarily making themselves prisoners of a game that will impose increasingly difficult challenges on them over the levels, the singers deliberately wanted to put themselves in danger. This central number (with projections created by Sound and Design, former members of Moment Factory) will be particularly rich in disparate songs and impressive vocal challenges; like the mini album (EP) which will be launched with the start of the tour and which will feature pieces from four different styles of music (including country and metal). Like what, yes, everything is possible in the famous multiverse.

“Also, now we can allow ourselves to realize our fantasies on a large scale, enthusiastically continues the singer who was dedicated to a career as a… conductor! We produce ourselves, there is more fla-fla, more lighting and more projections!”

For these former choirboys who have grown up well, the idea of ​​singing something other than pieces from the classical repertoire (a desire and an assumed choice from adolescence) has led them to a busy career doing what very few many artists can (and know how to) do: combine voice and classical discipline with a repertoire of pop songs. All sprinkled with a refreshing sense of self-mockery and good-natured humour.

“With Serge Postigo, from the start, there was humor, continues François Pothier Bouchard, who says he learned from him how to take his place on stage. We went to him because we found ourselves in his side of variety, acting, sketches and singing. We have been working with him for ten years and we are lucky that he has accepted to work with us again, despite his various projects in France.

The quartet – who will also release a Christmas EP – returns precisely from a show presented in Paris on June 27th. Excited, the singers confide that they had a lot of fun going to work on the other side of the Atlantic.

“It really unblocks in France, there is a good reception and very good chances that we'll go back for more than one show.”