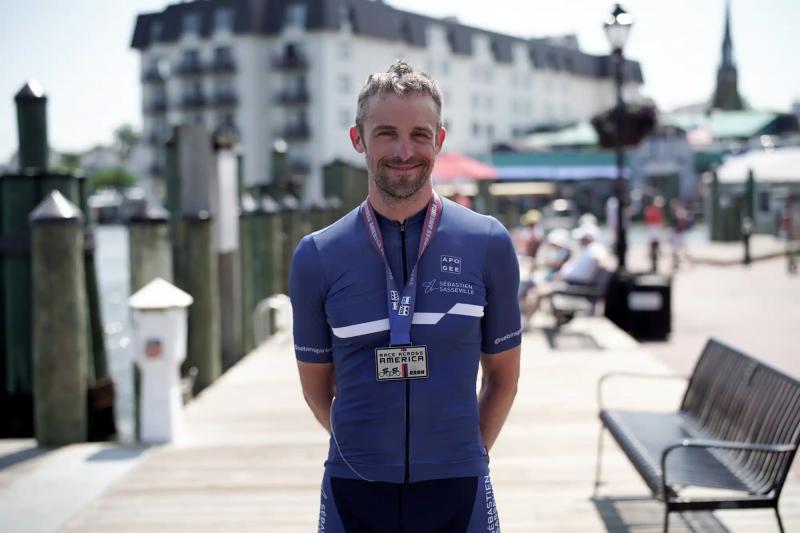 Well aware that he had to take up the biggest challenge of his sporting career, ultracyclist Sébastien Sasseville had a hard time, but he nevertheless crossed the finish line of the RAAM (Race Across America) within the maximum period of 12 days, not without seriously thinking about throwing in the towel with 1000 km to cover.

A general view of the starting line, where the Quebecer is left for Oceanside, California on June 14.

Leaving Oceanside (California) on June 14, for a 4800 km ride that crossed three mountain ranges, two deserts with temperatures of 45 Celsius and 12 States, Sasseville ended up in Annapolis ( Maryland) in 11 days, 22 hours, and 25 minutes, finishing 12th among 33 athletes at the start, of whom more than 50 percent dropped out.

The only Canadian entered in the solo event came very close to retiring on day nine.

“ Every day there were darknesses, great joys and little doubts, but my body completely collapsed on day nine, he summarizes a few days after returning home. My body was weak and I had no current in my legs. I felt a big doubt of not being able to complete the race. »

Sasseville was in shock after having worked tirelessly on this project for a year in the company of ten members of his team who accompanied him.

The Quebecer receives treatment from his team on the ninth day, where he almost had to give up.

“I felt like I was letting the whole team down,” says the cyclist, who suffers from type 1 diabetes, the most severe form of the disease. It was one of the most difficult moments of my career. I was in tears and devastated. ”

It was at this point that his team took command.

“I was exhausted and I was no longer able to make the right decisions,” he explains. They told me “You sleep for five hours and we take care of everything”. This was the resurrection strategy. When I woke up after five o'clock instead of the usual two to three hour breaks, there were three days left to meet the deadline and 1000 km to go. It was my turn to show what I could do.

Sébastien Sasseville in one of the two deserts covered during his epic, on the third day.

Back on his horse, Sasseville was able to swallow the kilometers at a fairly steady pace to finish within the prescribed time.

Sasseville and members of his team after the Quebecer had crossed the line of 'arrival.

With hindsight and a bit of perspective, the disappointment of not having clocked as fast as he wanted was quickly replaced by the pride of having reached the finish line on his first attempt.< /p>

“I'm so proud of the team and it's mission accomplished. I was physically fit enough to get a better result, but RAAM is so much more than physical exertion. We had incredible moments for our first experience. We made some rookie mistakes, but we learned a lot and the experience was just as satisfying.”

Back in the future?

< p>While he is not yet fully recovered from his efforts, will Sasseville line up again at the starting line in the future?

“I want to do it again, says the 42-year-old ultracyclist, but maybe not in 2023. My body needs a rest. Recovery will take a few months. I asked my network so much. My friends have given so many hours. ”

“I still have the passion to live big projects, but my goal for the moment is to live lots of small, simple things, concludes Sasseville. I wasn't a hermit, but I've given up on many things over the past year and missed out on several special events. It was my choice, but I want to take it back. »

Beyond his sporting performance, Sébastien Sasseville is extremely proud to have been able to gather around him a group of people united by a common mission.

“We are linked for life, illustrates the 42-year-old ultracyclist who crossed Canada by bike in 2021 and in the race in 2014. My only merit is to have gathered everyone around a mission common. This was the most difficult aspect and the one I am most proud of. It's like building a business. We had a Cadillac team while others were bickering.

“I am not an Olympic gold medalist, I never win a race, but I accumulate enriching experiences and that is what keeps me alive, he says. Some of my partners told me that they wanted to improve certain aspects of their lives by participating in this challenge. It makes me happy. The race had an impact on many people. »

For all these reasons, the ultracyclist, author and lecturer considers RAAM to be his greatest achievement.

“For all that it entails around the bike, I think this is the biggest accomplishment of my career. In a group of ten, it was necessary to create a culture and cohesion. I will take the time to savor the accomplishment. »

Sasseville is happy to demonstrate that his type 1 diabetes is not a brake.

“Despite the disease, you can do great things. Instead of fighting or trying to overcome the disease, I accepted and welcomed it even if it is not easy and not fun. From the moment you make the disease an ally, it's fine. »

Given his state of health, Sasseville is convinced that he has wasted a fair amount of time, but he doesn't mind at all.

” I lost hours and I could have finished higher, but that doesn't bother me, assures the one who received his diagnosis at the age of 22  This is my path, my destiny. In the beginning, it was diabetes that gave me this platform, gotten sponsors and gave me this career.

The cyclist, who has type 1 diabetes, gets a helping hand at inside his team's trailer on the fourth day.

Managing his blood sugar was a constant challenge.

” Managing is hard enough when you have a desk job and eat three meals a day at regular hours, he says. During the RAAM, I found myself in a unique environment. It was 45 degrees in the desert and later I was wearing a toque in the mountains of Colorado.