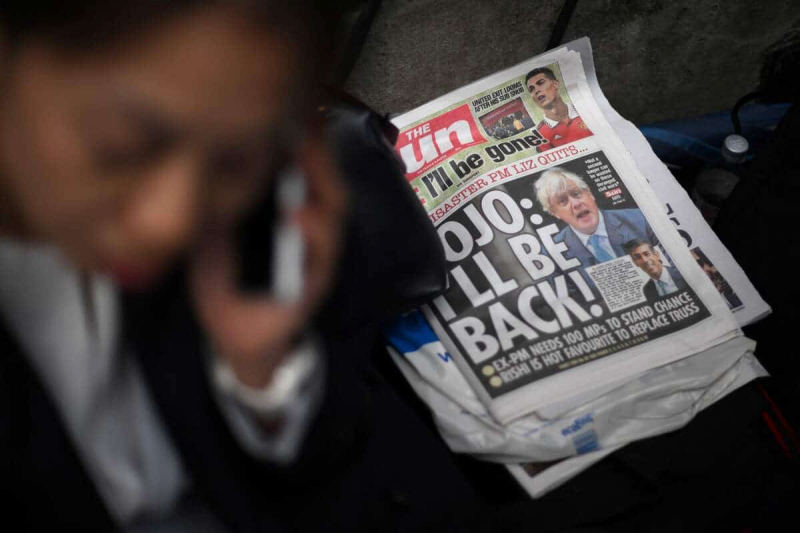 Ex-Prime Minister Boris Johnson was on a plane returning to London on Saturday morning from his Caribbean vacation, bolstering speculation that he will run for Downing Street after Liz Truss resigned on Thursday .

Three names have emerged in this blitzkrieg within the Conservative Party: current Parliamentary Relations Minister Penny Mordaunt, who formalized her candidacy on Friday, Rishi Sunak, the former finance minister who lost in early September to Liz Truss, and former Prime Minister Boris Johnson, who resigned in July after a succession of scandals.

< p>His fight with Rishi Sunak dominates the headlines on Saturday. “Johnson and Sunak lead race as hopes of unity fade,” headlined “The Independent”. “Conservative tribes go to war,” wrote “The Guardian”. “The Daily Telegraph” remained factual on the front page: “Rishi Sunak races to secure a majority of Tory MPs”.

Friday evening, an ally of Boris Johnson in Parliament, James Duddridge, had warned: “he will take the plane to return”. “He said: 'We are going to do it, I am ready'”, according to this deputy who exchanged with him on WhatsApp.

But the ex-prime minister, who had left Parliament on July 20 by launching “Hasta la vista, baby!”, has not yet officially announced his candidacy.

Rishi Sunak, whose resignation from the Johnson government had led to that of his boss, managed to exceed the threshold of 100 sponsorships required in order to compete to take the lead of the Conservative Party and therefore automatically Downing Street.

But he, too, has not officially entered the race. He has not made a public appearance since the resignation of Liz Truss.

Relatives have spoken, however. “I'm sure Rishi Sunak will show up. He is the ideal candidate,” ex-Minister of Justice Dominic Raab told Sky News. “If you look at the economic challenge we have, he's always been right about what we need,” he said. “He is in the best position to restore confidence in the government”.

According to the Guido Fawkes site, which follows the upheavals of the race very closely, Rishi Sunak had 105 sponsorships on Saturday morning , ahead of Boris Johnson (69) and Penny Mordaunt (25).

Applicants have until Monday afternoon to secure 100 endorsements. MEPs will vote first, and if there are two remaining candidates, the party's 170,000 members will have to decide between them in an online vote by October 28.