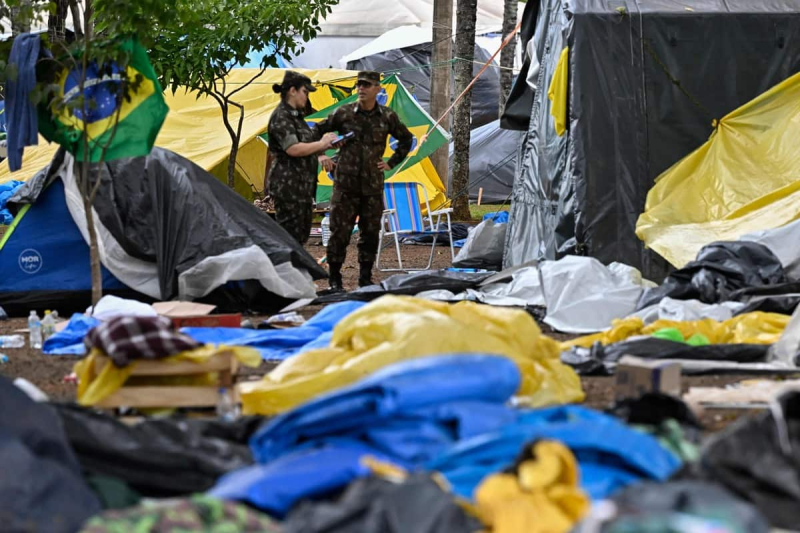 The day after the ransacking of the Presidential Palace, Congress and the Supreme Court on Sunday by hundreds of Bolsonarians, many questions arose about the unpreparedness, incompetence and even complicity of the security forces.

How did the attackers gain access to places of power so easily? Who funded this attack on Brazilian democracy?

Why did the security forces not dismantle earlier the camps of supporters of the far-right ex-president Jair Bolsonaro installed for two months in front of barracks across the country, demanding military intervention to prevent left-wing President Luiz Inacio Lula da Silva to come to power?

“Tragedy more than announced in Brasilia”, headlined columnist Eliomar de Lima in a column for the daily O Povo, based in Fortaleza (northeast).

The warning signs were not lacking. Saturday evening, a hundred buses bringing some 4,000 Bolsonarians arrived in the capital and joined a camp opposite the Army headquarters.

The Minister of Justice Flavio Dino then authorized the deployment of agents of the National Force, a special police force sometimes sent to the various states in the event of a threat to law and order.

This did not prevent the rioters from covering the eight kilometers between their camp and the place of the Three Powers without being blocked by the police, where the Presidential Palace, the Supreme Court and the Congress meet.

“Bad will or bad faith”

“We can see from the images that (the Bolsonarists) were guided (by the police) to the place of the Three Powers”, lamented Lula at a press conference.

< p>“The law enforcement agencies of the Federal District (Brasilia) have shown incompetence, ill will or bad faith,” he accused.

Minutes before the invasion, a security official in Brasilia sent a reassuring – and surreal given what happened after – audio message to the Governor of the Federal District, Ibaneis Rocha.

“The demonstrators are escorted by the police (…) and the climate is calm, it is a completely peaceful demonstration”, he says in this recording published by the Metropoles site.

In its editorial published on Monday, the Estado de S. Paulo daily highlighted “the appalling ease with which the vandals who did not accept the defeat of Jair Bolsonaro invaded the places of power in Brasilia, during the worst attack on the Brazilian democracy since the end of the military dictatorship (1964-1985)”.

Long before the arrival of the buses, numerous posts on social networks showed that the attack was being prepared in every detail for several days.

“It's all expenses paid. Water, breakfast, lunch and dinner. And you will camp at the Planalto (the Presidential Palace)”, could we read for example in a Bolsonarist group of Telegram messaging.

What seriously calls into question the effectiveness of the intelligence services.

The attitude of some police officers has also been singled out, with videos showing officers filming the assault with their phones rather than intervening.

“The security forces were there, but they did not act to prevent this invasion. If it was another type of protester, the reaction of the police would not have been so peaceful,” lamented Pedro Sabino Rapatoni, administrative assistant in Brasilia.

The columnist of TV Globo Miriam Leitao denounced on Monday the “bolsonarization of the police forces in Brasilia”.

Starting with their leader, the Secretary of Security of the Federal District Anderson Torres, former Minister of Justice of Jair Bolsonaro, who was in the United States on Sunday as the former president.

“During the whole period that he was a minister, he showed that beyond his functions, he was before quite a fervent Bolsonarist militant,” Ms. Leitao explained.

Anderson Torres was finally sacked on Sunday evening, and the person who appointed him, Governor Ibaneis Rocha, was suspended from office for 90 days. by a Supreme Court justice.

But more heads should roll soon.