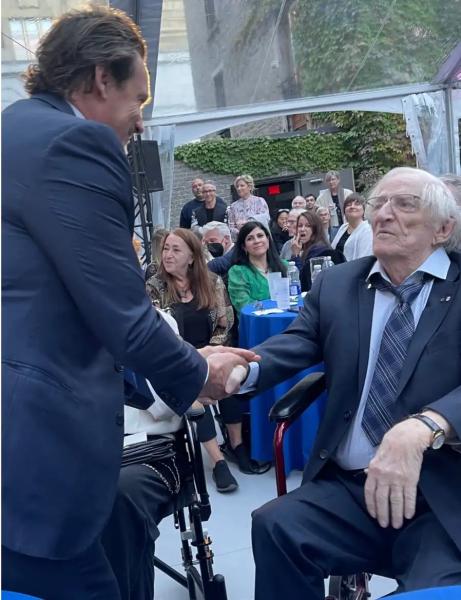 At 87 and despite major health concerns, Jean Lapointe came to celebrate the 40th anniversary of the Maison and the Jean Lapointe Foundation on Wednesday evening. Masked and moving in a wheelchair, the chic actor was surrounded by several members of his family and friends.

Jean Lapointe has had rather serious health problems for almost ten years (stroke, cancer, stays in CHSLD). Challenges he describes in detail in the new part of his biography Pleurires. Because the book, which was launched 27 years ago, has just been enhanced with a fourth part entitled Souvenirs.

His state of health did not prevent the actor from making a rare public outing for this ceremony organized in honor of the 40 years of existence of the Maison and the Jean Lapointe Foundation; a place that has welcomed 40,000 people in 40 years and has been doing prevention work with a million young people since 2004.

“I spent difficult years (…), he said in a shy voice at the microphone. All those who came, and the gray nuns too (to whom the building housing the Maison Jean Lapointe belonged), because if it hadn't been for them, there wouldn't be anyone there. From the bottom of my heart, I want to say a big thank you. Especially my personal friends who have a lot of other things to do (laughs). Thank you for those that this organization has helped, it is perhaps what I am most proud of, even if I am only the instigator. »

Pierre Karl Péladeau, President and Chief Executive Officer of Quebecor, was also on hand and made a point of speaking to highlight the great friendship between Jean Lapointe and his father, Pierre Péladeau. “In the name of my father and thank you for everyone you have helped,” he said.

A mural bearing the effigy of the great comedian, surmounted by an excerpt from the song Pleurire, was also unveiled on one of the walls of the backyard of the Maison Jean Lapointe.

The actor Benoit Brière, who wrote the preface to the biography Pleurires, was also part of the party. He also took the opportunity to reveal to the Journal that he and Jean Lapointe are working on a joint film project. “There will be something, I promise,” he confirmed.

“My father is still very funny, despite all that he can go through and wished there were touches of humor in his new biography” , explained to the Journal Anne Elizabeth Lapointe, the youngest of the family of 7 children and the one with whom the artist gathered his memories for the writing of the last part of the book.

“We did a full proofreading and writing job for almost four months during the pandemic, when he was doing really well,” she continues. It shook him up a bit, because he's someone who doesn't look back; he looks ahead, as much for the successes as for the failures. »

His daughter boasts of the optimism, positivism and quality of being always grateful to her famous father who has been married for more than 20 years to Mercédès, a woman of the same age as him who is currently taking great care of him. “She takes care of me as if I were a little old man, he writes in his biography. What am I saying, I'm a little old man! »

It was the residents of Maison Jean Lapointe who expressed the desire to read Mr. Lapointe's biography, hence the idea of ​​a reissue that would coincide with the 40th anniversary of the Maison and of the Foundation.

“I am blessed to have him still alive and he was lucky to have great recognition, especially from his peers,” added his daughter Anne Elizabeth. He is always turned towards the other and his happiness really depends on the happiness of his children and the people he loves. »

Extract from the biography Pleurires of Jean Lapointe

During my career, I 've been rewarded in many ways.

First by my audience, which explains my long career.

And also by my peers and the industry.< /p>

I want to say that I have never run after awards and tributes. I don't do this job to receive it. As I tell you, my reward comes first of all from the people who attended my shows and who bought my albums. My fans, as they say.

Despite everything, receiving an award is always a pleasure, and in 2010 and 2011, I received several in a short space of time.

In June 2010, the Association of Cinema and Cineparc Owners of Quebec (APCCQ) awarded me the Bobine d'or for my entire film career at the organization's annual dinner.

The same year, I won two Jutra awards: the one for the best supporting actor for Robin Aubert's film À l'origine d'un cri and the Tribute award for my entire film career.

Two prizes to honor me? I said to myself:

“Dude, do they know something that I don’t? They must have thought I was getting old and wouldn't be long!

And yet, I would still like to play in the cinema if the opportunity presented itself. When I had health concerns, Benoit Brière approached me to play in a short film. But it was impossible for me. I had just had a stroke. But I wouldn't hate being on a film set.

You know, despite everything, I remained young in spirit and at heart.

Today, I lead a comfortable life. Mercedes takes care of me as if I were a little old man. What am I saying, I'm a little old man! I would like to live to be 93. I want to take advantage of the time I have left. Spend beautiful and good times with my family and friends. Recently, a shadow was found on one of my lungs, but it's stable. And I can't have any more treatments.

So death, I look it in the face and I say to it: “Not right away. You will come back to see me when I am 93 years old.

Until then, I will continue to live the

Alcoholics Anonymous lifestyle: one day at a time. And to live 24 hours at a time.