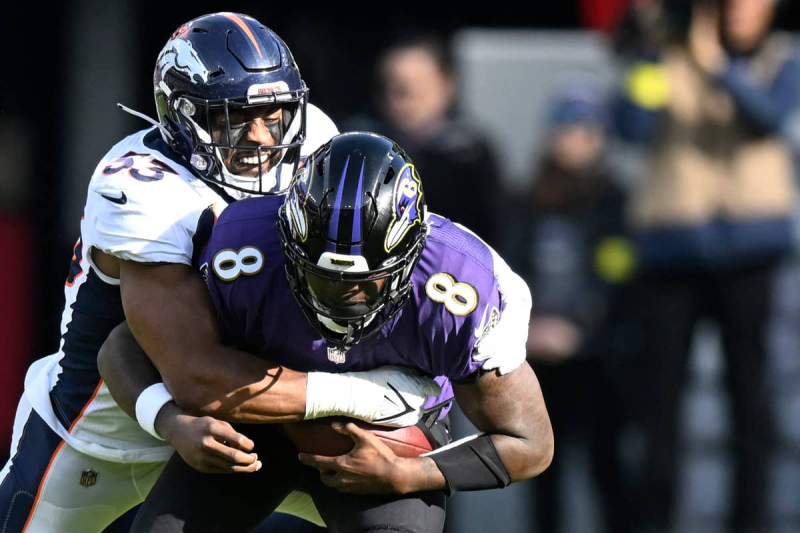 The Ravens may have beaten the Denver Broncos 10-9 on Sunday in Baltimore, but they lost the services of quarterback Lamar Jackson.

Jackson only had time to complete three passes for 11 yards before injuring his knee. He did not return to the game afterwards. The 2019 NFL MVP has hit 62.1% of his throws for 2,231 yards and 17 touchdowns so far this season, having himself crossed the goal line three times.

En relief, Tyler Huntley did just enough to lead his team to victory. He had 187 passing yards, suffering one interception. He scored the only major of the game in the fourth quarter on a two-yard run.

Brandon McManus scored all of the visitors' points with three field goals. However, he missed one that could have made the difference.

The Green Bay Packers defeated the Bears 28 to 19, at Chicago, surpassing the Illinois club at the top in NFL history with a 787th victory.

Before this duel, the two teams were on an equal footing. Aaron Rodgers' squad broke that tie, taking the lead for the first time ever.

It was an 18-point last-quarter surge that saw the Packets save themselves with victory. AJ Dillon first closed the gap with a 21-yard run, then Christian Watson gave the lead by virtue of another ground play, this time from 46 yards.

Justin Fields had two interceptions in the loss without joining a receiver for the touchdown. He was the author of the only middle finger of the local favorites using his feet.

Amon-Ra St. Brown had 114 yards on 11 receptions, scoring twice in the Lions' 40-14 win over the Jaguars from Jacksonville to Detroit.

The Pittsburgh Steelers nearly squandered a 13-point lead, but eventually defeated the Falcons 19-16 in Atlanta.

Poor Texans suffered a 10th loss this season, this time 27-14 to the Cleveland Browns in Houston.

Mike White allowed the New York Jets to go for 369 yards with his arm, but he saw two passes intercepted without reaching anyone in the end zone as the Minnesota Vikings triumphed 27-22 in front of their fans.

The Washington Commanders and Giants had to settle for a 20-20 tie in New York.

Jalen Hurts had 29 passes, including three for the touchdown, and the Eagles defeated the Tennessee Titans 35-10 in Philadelphia.< /p >