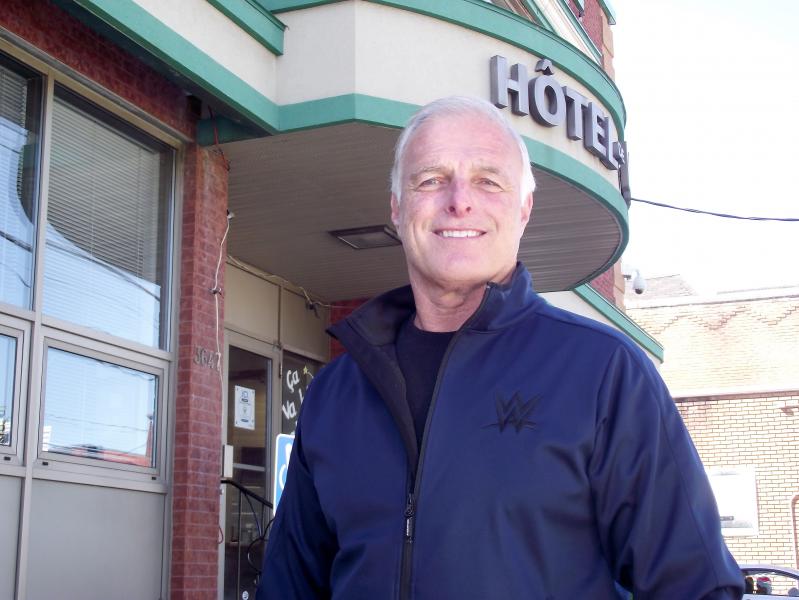 Spectacular wrestler Raymond Rougeau was born in Montreal on Boyer Street and then moved to 50 Notre-Dame Street in Saint-Sulpice, and eventually the family moved to Rawdon.&nbsp ;

Raymond made a career in the arena as a professional wrestler for 18 years, was a city councilor for 20 years, then became the mayor of Rawdon on November 7, 2021, a position he still holds today.

< p>Raymond lived a dream childhood in Saint-Sulpice with his parents, Jacques Rougeau and Virginia Mitchell, as well as with his sisters, Joanne and Diane, and his brothers, Armand and Jacques Jr. They had a great time in the family pool, bathed in the St. Lawrence River and went horseback riding and water skiing.

His father was his friend, his business partner and his childhood idol.

Was it difficult to be part of a family where your uncle Jean “Johnny” Rougeau and your father, Jacques, were big stars in Quebec?

You had to know my father well, because he never behaved like a star. So this pressure, I never felt it.

At school, did young people want to fight with you?

It was quite the opposite. The only battles I had were in the wrist shot, and I was doing quite well, especially against my teachers at Jean-Baptiste-Meilleur high school in Repentigny. However, I played hockey, broomball and lacrosse.

You gave a presentation on wrestling in grade 5.

The the day after my father's fights, the students liked to get together with me to discuss his fights and take the opportunity to get to know the other wrestlers.

Did you know the basics and the tradition of wrestling?

Not at all. I was like them, that is to say, cursed and furious with the wrestler who manhandled my father in a wrestling arena.

You hated Abdullah the Butcher.

When Abdullah brought out an object he had hidden to knock out my father, I would shout very loudly to my father to warn him. I was so pissed that I wanted to go after this mean wrestler. I was barely 10 years old.

Did your father perpetuate the myth of wrestling once at home?

He was incredible. He respected his craft so much that if he supposedly injured his leg, he would limp home for a few days so as not to break the wrestling myth.

You brought your father's wrestling championship belt at school.

At the end of my wrestling talk, I pulled out my dad's championship belt. Spontaneously, my classmates got up to walk towards me, because they wanted to touch the belt, but above all, to wear it around their waist.

You liked to go horseback riding with your father.

I spent so many beautiful moments with him hiking in the woods or on the banks of the river, him on his horse and me on my pony that he gave it to me when I was 8.

You barely made two dollars a day.

I was quite young. Before becoming a hawker, I harvested vegetables on the neighbors' farm, and for each windfall I filled, I was paid the marvelous sum of two pennies, for a total of just over two dollars at the end of the day.

You wanted to wrestle.

No way. I had a passion for airplanes. Besides, today, I have my pilot's license. I started wrestling to please my father. Without a doubt the best decision I've ever made.

Your father was in charge of your training.

I was 13 years old. He told me that if I followed his guidelines, I would wrestle professionally at the age of 16. For 365 days a year, except one day, I trained after school at home or at Lionel Robert's wrestling school with wrestlers, including Gino Brito, with whom I still communicate today.

Why except one day?

Every morning, my father would ask me how my training had been. I told him I had a fever, so I didn't train. Without hesitation, he told me that I should have found time to train. He always denied this incident, but I still remember it.

Did your father keep his word?

Three years later, at the age of 16 years and a month, I made my professional debut in Joliette to a full house, because my uncle Johnny had made sure to fight in the final.

How were the political discussions at home?

My uncle Johnny was very close to Mr. René Lévesque, and my father was supportive of Mr. Lévesque. However, to tease my mother, who was English-speaking, he offered to give her $20 if she voted for the PQ. She replied that she did not need his money in order to know who to vote for.

“We spoke French and English at home. – Raymond Rougeau

You have never consumed alcohol.

My mother always told me that I was born old. Instead of going to bars when I was 16, I was buying residential real estate, and my business partner was my dad.

My uncle Johnny's used car, a 1970 Thunderbird. I didn't drive too fast because I was afraid of damaging it.

He often visited the wrestlers in the locker room, but I couldn't meet him: Elvis Presley, an avid wrestling fan.

J I have so many more questions, but I'm running out of space. Tell me about your spouse and your son, Félix.

I know a dream life with my son just like the one I lived with my father. Today, he lives the same life with his daughter. My 25-year-old wife, Louise Daoust, thought I wanted her to walk around with signs indicating the rounds, before I explained to her that it was boxing, the rounds. For our first meeting, I invited her to go boating, and the ride never ended, because we are always together.