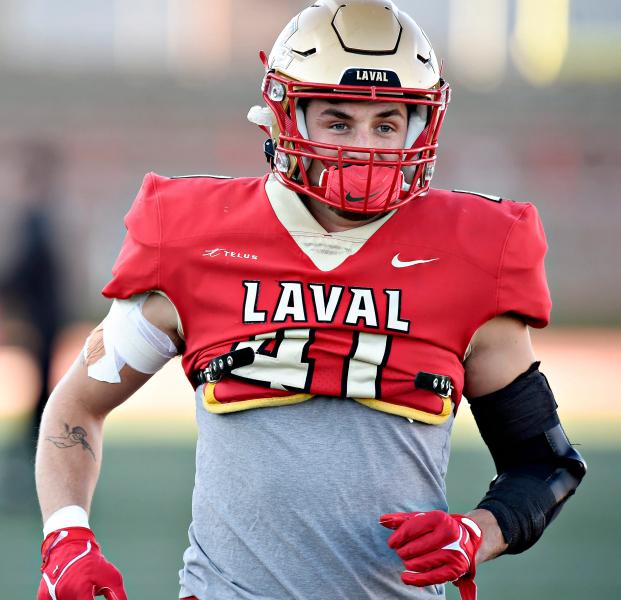 Before the game against McGill, Glen Constantin said the special teams were the group that had been the most consistent since the start of the season. The proteges of Mathieu Bertrand did not lie the Laval driver in the victory against the Redbirds.

“I'm happy with the guys' performance,” said Bertrand, who is the special teams coordinator. Our kicker Vincent Blanchard had a great game and it's going to be good for his confidence.

“The guys work hard and they believe in what they're taught,” adds Bertrand. We have more experienced players, but also younger ones who are doing well. I'm happy with the progress. »

Bertrand tips his hat to a rookie who made his way to the clearing unit. “It's rare that I use a rookie on the clearing unit, but Billy [Jonas Pernier] stands out in the company of established players. It's a nice surprise. »

Bertrand expects a tough battle against the Vert & Gold from the University of Sherbrooke, which also relies on a good group on special teams, in particular with two good kickers.

“It’s always great battles against Sherbrooke, underlined the former Rouge et Or star quarterback. I have a lot of respect for Kevin Régimbald-Gagné, who will always get the most out of his players. »

For this match in Sherbrooke, Bertrand can count on the return of Charles-Antoine Beaulieu, a pillar within his unit. “Charles-Antoine missed a few games with injuries, but he's our superstar on special teams,” he said. He has no respect for his body and he is explosive. It's a matter of him picking up his pace, but I'm really glad he's back. Despite his absence, our advantage is to count on several good athletes ready to take over. »

The special teams allowed Beaulieu to carve out a place within the roster of 48 players quickly. “Since my first year at Laval, I have stood out on special teams,” said the CNDF product, who has only played two games since the start of the season due to various injuries. I play defensively a bit, but it's happening on special teams for me. I'm really happy to be back in the game.”

“I'm really happy with our start to the season and Mathieu is also happy with our results, added Beaulieu. Against Sherbrooke, it's going to be a good game on special teams. They always show up. »

The perfect prototype for the CFL, which is constantly looking for players who can contribute on special teams, Beaulieu was passed over in the last draft.

“Four teams spoke to me, but I told them that I wanted return to play a final year in the university ranks, he said. I'm not closing the door if an opportunity arises next year as a free agent. “

Bertrand was not surprised that Beaulieu was not selected, but he would not be surprised if he received an offer as a free agent.

“Because Charles-Antoine is not 6 ft, 3 in and 225 pounds, I was not so surprised, explained the former fullback of the Edmonton Elks. In the CFL, teams look a lot at the physical aspect. Because of this, it's flown under the radar, but few gamers own a movie of its best games like it does.

“Even though he is smaller, he is strong for a player of his size [6 ft, 1 in and 185 pounds], continues Bertrand. It is not a finality not to have been drafted and I would not be surprised if he signs this year. »