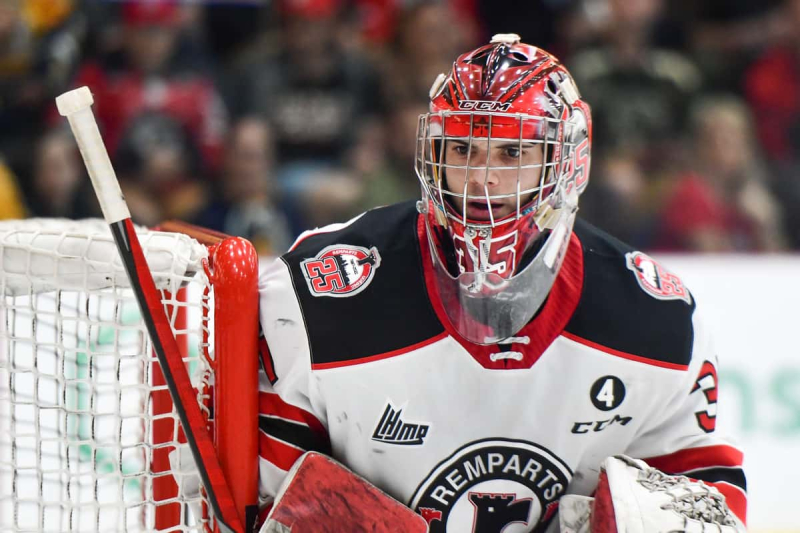 William Rousseau doesn't put his head in the sand: hardly anyone expects him to crack Team Canada's roster for World Juniors in Halifax and Moncton , from December 26 to January 6. And it suits her perfectly.

The 19-year-old Quebec Remparts goaltender is one of two goaltenders invited by Hockey Canada not to have been drafted by an NHL team, along with Thomas Milic. The latter, however, wore the Maple Leaf at the 2021 World Under-18 Championship. Benjamin Gaudreau (Sharks 2021 third-round pick) and Tyler Brennan (Devils 2021 fourth-round pick) complete the quartet of guest goalkeepers.

Rousseau will therefore arrive at training camp with everything to prove, and very little to lose.

“I come as the least known goalkeeper but my goal is to get there and make my place. I have not done the last camps and I arrive as underestimated. My trainer Pascal Lizotte often uses an image that reflects the attitude I want to have at camp. He often tells me, “The $100 bill is in my pocket. It is mine and I do not give it to anyone”. »

Ironically, it's a bit like this attitude that Rousseau has adopted since last year's playoffs, when he grabbed his $100 bill – read the starting goalie position for the Remparts here – that he has never given back since.

“I come here with a sense of urgency and with the attitude of a competitor who wants to demonstrate that he will do everything to represent his country and bring the Maple Leaf.

BOLDUC READY FOR ANYTHING

After experiencing the disappointment of being ignored last year, after having had a difficult start to the season with the Remparts, Zachary Bolduc will have the chance to make amends this season. The St. Louis Blues prospect, who ranks third in QMJHL scoring with 43 points in 24 games, will come to Moncton with the idea of ​​doing everything to earn a place in the national selection, and this , regardless of the role.

“It’s still Hockey Canada and the under-20 tournament. To carve out a place with this team, whether it's to play on the first two lines, or on the last two, it would be incredible. My goal is to find a way to contribute to the success of the team.

And, unlike the same date last year, Bolduc believes he is playing a level of hockey that can allow him to represent the country starting December 26 in Halifax.

“I had a good start to the season unlike last year and I am focusing on certain small details that help me play well night after night. It really makes a difference.

For Evan Nause, it's the same thing. “I want to go there and enjoy the moment. It's something you've been working on all your life. We had a Zoom conference with the coach today [Dennis Williams] and he reminded us of what a gift it is to be in this situation. Being able to experience this pressure to do well is something that not all players experience. So I'm very excited. »

Besides, despite his good start to the season, James Malatesta did not receive the call from Hockey Canada. Patrick Roy, last October, had mentioned that he hoped “that Hockey Canada looks at it. The way he's playing right now, he deserves at least an invitation to camp for the World Junior Hockey Championship.

It should be noted that future Remparts member Justin Robidas, of the Val-d'Or Foreurs, was not invited to camp either.