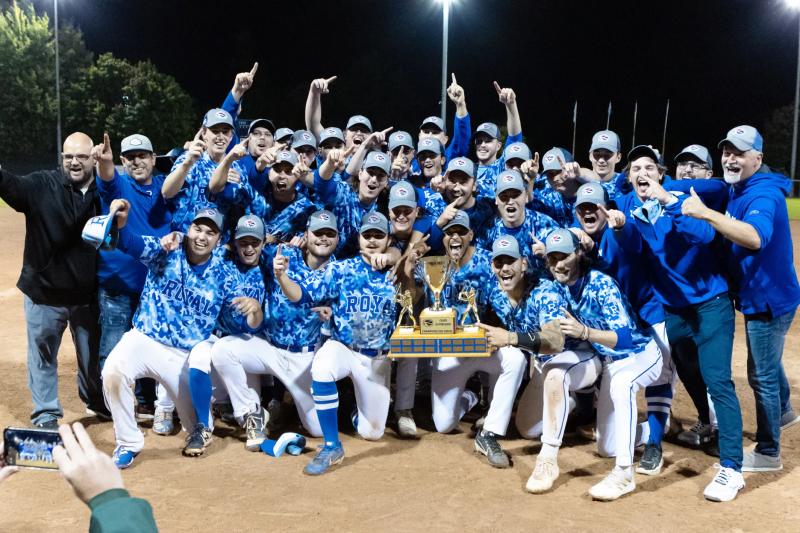 The Royal de Repentigny, led by Mathieu Granger, won the Quebec Junior Elite Baseball League championship against the Charlesbourg Alouettes. During the last game in Repentigny, it was played in a full stadium of more than 1,000 spectators. With the stands full, hundreds of spectators lined the fence outside the Flavio-Pratta stadium to watch Game 7.

The coaches of the champion team the Royal de Repentigny, Charles Lafortune, Mathieu Granger, Alexandre Guay, Fréderic Charlebois, and their players made a nice gesture when they went to congratulate the Playoffs MVP, Xavier Boutin, of the Alouettes.

Playoff MVP Xavier Boutin of the Charlesbourg Alouettes is flanked by two of his teammates who ended their careers in the LBJÉQ, Samuel Fortier and Xavier Bilodeau .

The leaders of the Royal, Dominique Lapensée, Dany Pratta and Richard Aucoin are dazzled by the support of the spectators while some of them were even standing in the “pick up box” of their truck.

Among the 22-year-old Royal de Repentigny players who played their last game in LBJÉQ we see Michael Pavan, Samuel Campeau, Neftaly Severino Cronier, Gabriel Goulet and pitcher Jacob Brault who has a record of 11-0.

The Royal player Gabriel Goulet is surrounded by young supporters and his teammates, Philippe Breton and Étienne Grondin-Harnois.

Joy and sadness were present as the Player was seen from playoff excellence, Xavier Boutin and his parents, Mélanie Renaud and Steeven Boutin, mourn the loss of the Charlesbourg Alouettes and celebrate the appointment of their son.

Josue Peley, Charlesbourg manager and former coach assistant with the Blue Jays, as well as Mathieu Granger, the one from Repentigny, are proud of the spectacle offered by the players.

Pier-Alexandre Bernier, the governor of the Charlesbourg Alouettes, who can be seen with his daughter, Chloé Bernier, wanted to underline the support of the members of his Board and especially the excellent performance of the players.

Ian Lavigne, who is continuing his studies to become a firefighter, is with by Philippe Brousseau.