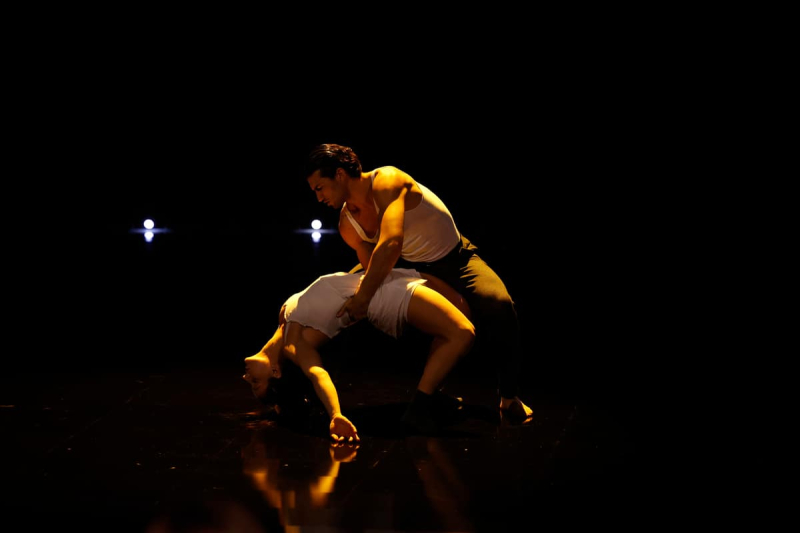 Marie-Josée and Jason won the fourth season of Revolution on Sunday evening, after a high final colorful and rich in emotions. In this final stage of the competition, they particularly distinguished themselves with two technically flawless and perfectly executed choreographies.

For the first part of the final, presented to TVA, the duo had decided to continue their number on domestic violence. “We wanted to present the other side of the abusive relationship, said Marie-Josée in an interview. In this kind of situation, there are different emotions that mix. It remains very deep because there is death, but we wanted to show the intense emotions that invade those who have to live and manage what they have just done.”

Their interpretation was close to perfection, she playing dead and he having to manage with his body and his feelings. “It was very difficult technically for both Jason and me. Dancing with your eyes closed is very complicated because you lose your bearings. In addition, I had to help him with the litters, while not letting anything show. It was a big challenge.”

The risk paid off for the duo, who earned the highest score of the evening, ensuring they progressed to the second part of the final, where they found himself facing Sunny Boisvert.

For the final 45 seconds, Marie-Josée and Jason gave a nod to their audition at the start of this adventure. “We wanted to do an explosive number that took up our two merged personalities, explained the dancer. We went more into what we usually do with a stronger energy.”

Here again, the quality of their interpretation and their technique contributed to their victory. Yet winning the final was not even a dream. “I never thought about it,” Jason admitted. It was like unattainable in my head.”

Marie-Josée knew it was an option, but her focus was elsewhere. “I really focused on each of the stages. I didn't think about the final until we got there. I wanted to give my all at each stage, hoping that it would be enough to go all the way.”

In the absence of knowing each other well and dancing together for a long time, the two have in common a very great capacity for work. “We are hardworking, we are very creative, and we complement each other, said Marie-Josée. We are two very different people, but when we dance together, it forms a whole. But I think we are above all very hardworking. We often finished rehearsals at one or two in the morning. As we did not have a long complicity, we worked a lot and with passion, it became a strong point.

For their price of $100,000, they don't have any concrete projects yet. “I'm not going to touch it right now, I'm going to save this money for future projects to invest in dance,” Jason said. Same story on the side of his partner: “I will invest this money for the moment. In the future, I would like to eventually create a dance company, it could be used for that.”

The two want to continue working together in duo, but also do individual projects. As of February 2023, they will also be part of the show Revolution on tour, of which we have just announced 15 more.