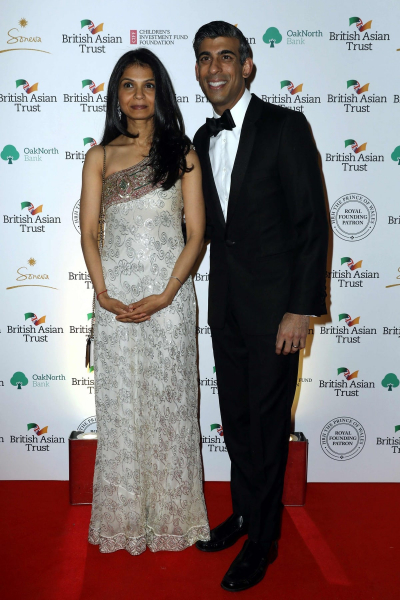 Ultra-wealthy Indian businesswoman Akshata Murty, wife of Britain's next Prime Minister Rishi Sunak, found herself in the spotlight last April, revealing the couple's lifestyle in the midst of a crisis purchasing power in the UK.

Considered by the British tax authorities as a person “not domiciled” in the United Kingdom, Akshata Murty's income, from abroad, was therefore not taxed. This status, perfectly legal, was a stain, in the midst of a purchasing power crisis, fueling the criticisms that were already targeting her husband, who was very reluctant to help households more.

After being strongly criticized because of the millions saved in taxes thanks to this status, the wife of Rishi Sunak, then British Minister of Finance, immediately announced that her income abroad would now be taxed in the United Kingdom.

“I do it because I want to, not because the regulations require me to,” she said.

Curator Rishi Sunak denounced a “smear campaign” coming from the ranks of the Labor opposition. “Dirtying my wife to get at me is awful,” he said in an interview with the tabloid The Sun in the face of the first serious crisis questioning his meteoric political rise.

“My wife was born in India, she was brought up there” and “it would not be reasonable or fair to ask her to cut ties with her country simply because she is married to me”, he pleaded.< /p>

Richer than the Queen

42-year-old Akshata Murty owns nearly a billion dollars in Infosys, an Indian technology giant co-founded by his father N.R. Narayana Murthy in 1981 and whose value today is estimated at 100 billion dollars.

This represents a fortune larger than that of the late Queen Elizabeth II, which was worth some 350 million pounds (420 million euros), according to the British newspaper The Sunday Times.

Akshata grew up in Bangalore, with her wealthy father, under the strict upbringing of her mother Sudha Murty, the first woman to be named engineer in the automotive group Tata Motors.

She forbids Akshata and her brother Rohan from watching television at home and forces them to go to school by rickshaw, like all their other classmates.

Regarded by some as “the grandmother favorite of Indians”, Sudha Murty, 72, also a prolific author, has enabled the construction of 60,000 libraries in India.

“My parents raised me and my brother with strong philanthropic values, and volunteer work in deprived areas allowed me to experience the challenges faced by women in India,” Akshata Murty said. p>

Studied in the United States

She left in 1998 to study economics in the United States, first at Claremont McKenna College in Los Angeles, California.

Akshata Murty and Rishi Sunak met a few years later at the prestigious Stanford University in California, where both were preparing a master's degree in business. He, from a modest background, receives a scholarship.

In the hierarchical Indian society, the parents of Akshata Murty will accept that she marry this simple son of a doctor, originally from Southampton, in the south of England.

Her father Narayana Murthy will give his assent to the his daughter's wedding plans, in which he admits that Rishi Sunak fits his description in every way: “brilliant, handsome and above all honest”.

Someone 1,000 guests, including politicians, business leaders and cricketers, will attend their wedding in 2009.

Akshata Murty established her own fashion label in 2010, Akshata Designs before become director of the investment company Catamaran Ventures, founded with her husband, in 2013.

The couple, who have two daughters Anoushka and Krishna, own at least four properties, including a house in upmarket Kensington, London, worth £7 million ($7.9 million) and an apartment lies in Santa Monica, California.