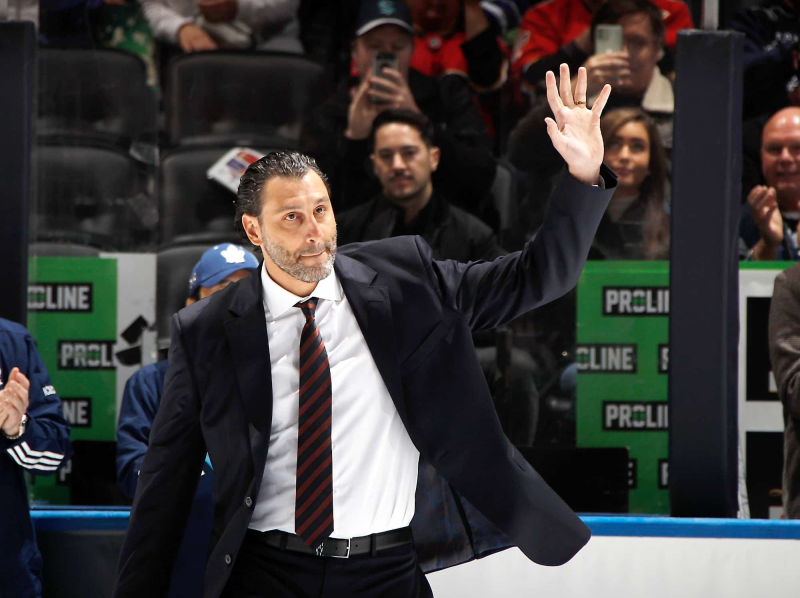 TORONTO | Roberto Luongo is now one of the immortals of hockey. The Quebecer was officially inducted into the Hall of Fame on Monday at Meridian Hall.

The former goaltender for the New York Islanders, Florida Panthers and Vancouver Canucks was able to live this special moment in the company of about thirty members of his family and friends.

In the room, we could see his parents Pasqualina and Antonio who were very proud of their elder. His brothers Leo and Fabio were also there.

Luongo gave a ten-minute speech to talk about his journey, but also to thank all the people who helped him to achieve your goals.

“My grandfather died a few months ago and he was the one who bought me my first pair of leggings,” said Roberto Luongo. I looked at the leggings and I realize that he is already paying. I tell him that these are not the colors I wanted.

“He told me that I had to accept what he bought me. I don't have a problem with that. The bill is $1,000. He looked at me and told me not to worry about the price.”

In addition to thanking his parents for giving him his work ethic, he spoke humorously about his hockey games in the family basement with his brothers Leo and Fabio.

It was the New York Islanders who drafted Luongo while he was wearing the Foreurs colors of Val-D'Or. He took the trouble to thank them.

When we say that Luongo is class in its purest form. We had another proof.

“I want to thank them for believing in me at that time. My time with this organization was short, but memorable because that's where it all started. It was with this team that I played my first career game.”

Luongo is the 41st goalkeeper in history to enter the Hall of Fame. Kim St-Pierre received the same honor last year.

For Quebec, this is the third enthronement in as many years. In addition to Luongo and St-Pierre, Guy Carbonneau received this honor in 2019.

In fact, Commissioner Gary Bettman mentioned it during his speech. He spoke of the contribution of “la Belle Province”. A nice touch.

During our interview with Luongo's parents, the former goalkeeper's mother returned to his son's years in Vancouver.

“It was not always easy, remembers Pasqualina Luongo. When he wanted to go to the grocery store, he would tell me to wait in the car and he would start running to get groceries. negative comments to Roberto in front of his children. His family found it difficult. We couldn't go to a restaurant either.”

In fact, he spoke about his years in Vancouver during his speech on Monday evening.

“I had my best moments in Vancouver and it allowed me to appreciate them in the more difficult periods, mentioned Roberto Luongo. They pushed me to become a better player and a better person.”

One of the stars

Luongo was one of the stars of the team. Expectations were high for him. Despite the pressure and criticism, the Montrealer rarely lost his temper in front of the media.

His most controversial career statement was about his multi-million dollar per season contract. He had mentioned that he hated him because it prevented him from being traded by the Canucks.

Other interesting information about Luongo before his selection by the Val-D'Foreurs Gold in the QMJHL draft. The Saint-Hyacinthe Laser had tried to advance in the first round to draft him. However, discussions to conclude a transaction had not been successful.

THE 2022 HALL OF FAME CUVÉE Roberto Luongo with Daniel and Henrik Sedin and Daniel Afredsson, when they were introduced before the Leafs game on Sunday.