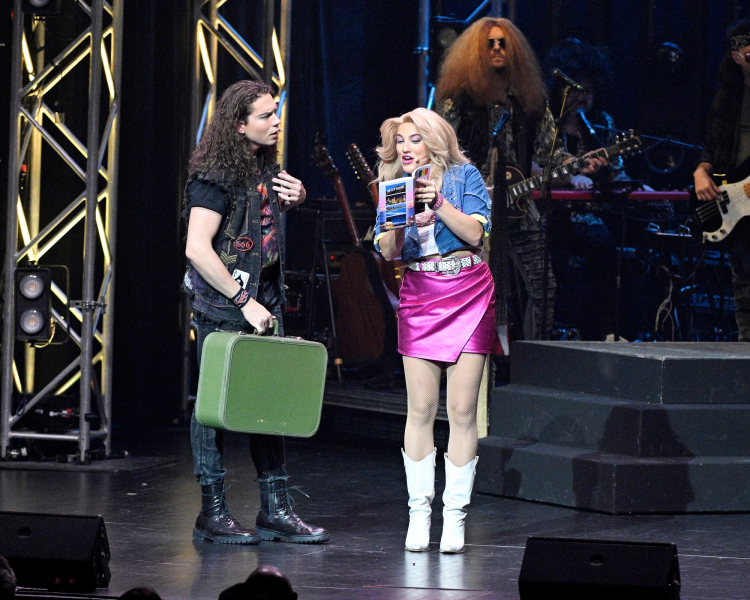 The successes of Pat Benatar, Bon Jovi, Whitesnake and other Journey. The “good old rock” and its roaring electric guitars. Not to mention hair spray lacquered hairstyles, leather pants and elastane skirts. The musical Rock of Ages manages to capture the essence of the 1980s and recreate it on stage for a hilarious evening, exhilarating and ultimately unforgettable.

Hard to miss the Rock of Ages phenomenon, who has been sweeping the planet for 15 years. First a phenomenon on the boards of Broadway, Hollywood relayed it to our screens a decade ago, with its film adaptation. The essential work finally takes on a local accent with its very first Quebec adaptation by Olivier Berthiaume. It was about time.

Because the music, the backbone of the musical presented at the St-Denis Theatre, may be predominantly American, but it is part of our DNA. Impossible not to take refuge instantly in our memory box as soon as the first chords of Hit Me with Your Best Shot, I Want to Know What Love Is, Wanted Dead or Aliveor Don't Stop Believin', some of the cornerstones of Rock of Ages.

The plot is as thin as it is incidental. Let us briefly recall that we follow the young and naive Sherrie (Lunou Zucchini) who arrives in Hollywood in the hope of seeing her star shine there. However, she will discover a much less gleaming reality there by landing a job in a bar – the famous Bourbon Room – frequented by Stacee Jaxx, a fallen rock star (Rémi Chassé).

Because all this ultimately only serves as a common thread for the musical numbers, real and solid pillars of the show. These are invariably excellent, carried by impeccable voices including that of the often underestimated Sharon James, absolutely brilliant in the skin of a seasoned and rebellious Justice. Same thing for Joëlle Lanctôt and Matthieu Lévesque; these two artists may be overshadowed by their less present characters, but they steal the show with each of their interventions.

Rock of Ages is also the perfect locomotive to transport Lunou Zucchini to new heights, a year and a half after she reached the final of Star Académie. Able to breathe all the candor and innocence necessary for the character of Sherrie, she delivers a faultless vocal level, appropriating with ardor the Harden my Heart, To Be With You and others More than Words.

But the real star of the show is unquestionably the young Jordan Donoghue, alias Drew on the boards, who greatly amazes, both in terms of acting and singing. The musical Fame put it on our radar in the summer of 2018. And Rock of Ages confirms that it will remain there for a long time to come.

The musical Rock of Ages is presented at the Théâtre St-Denis until November 6th.

On the red carpet

Many artists and public figures have moved to relive the frenzy of the years 1980, this Thursday evening, with the premiere of the musical Rock of Ages.

Rosalie Taillefer-Simard and her spouse Gabriel

The team by Rock of Ages