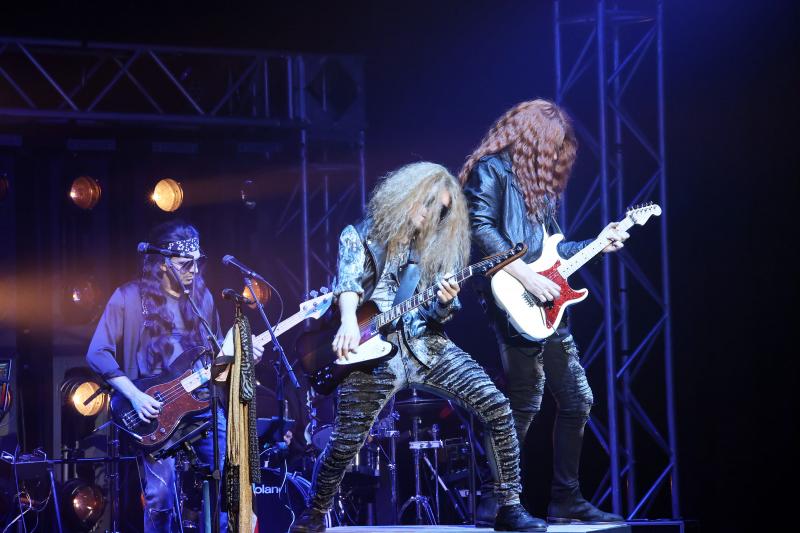 A musical comedy focused on the 1980s, the success of Rock of Ages is largely based on these songs which marked this era. The French adaptation of this show, premiered at the Capitole, is a very successful musical entertainment.

A hugely successful show on Broadway, with 2,328 performances, Rock of Ages is the story of Sherrie Christian (Luno Zuchini), a young girl who leaves her Kansas natal in hopes of becoming an actress in Hollywood.

It is also that of Drew Boley (Jordan Donoghue), budding rocker who works at the legendary bar Bourbon Room – an establishment threatened with demolition – and who dreams of being discovered and of glory.

Throughout the 110 minutes of the musical, presented in two parts, the hits and classics of the 1980s resonate.

Rock of Ages brings to life a musical period that was not necessarily unanimous at the time, but whose songs have stood the test of time and are, above all, forever recorded in our brains.

And they are well interpreted by the singers and by the group of five musicians. Lunou Zucchini is solid. She offers, in blonde, beautiful versions of More Than Words,by Extreme, and To Be With You, by Mr. Big.

Same thing during Quarterflash's Harden my Heart,. Sharon James, with the character of former disco star Justice Charlier, is the vocal star of the evening. She stands out during Shadows of the Night, by Pat Benatar, and Every Rose Has its Thorn, by Poison.

The group of five musicians delivers good versions of these songs from the 1980s.

Lunou Zucchini and Rémi Chassé offer a nice crossover during the double I Hate Myself for Loving You, by Joan Jett, and Heat of the Moment, by Asia, with, as a bonus, a very successful flash.

Let's say it right away, it's played big. Very, very big. We have caricatured this period a lot.

The costumes are accurate and representative of this period. Steve Bolton's choreographies are dynamic. It's colorful and it moves. Joël Legendre's staging is effective.

We play a lot and perhaps a little too much, at times, below the belt. The animator Lonny may recall, at the start of the show, that this was the time when things would no longer be acceptable today, but we raise our eyebrows a little when we hear the names of the fictitious groups Verge de Métal, Érection, and the nickname by Madame Plotte from Regina.

We had the very good idea of ​​offering a few moments, very amusing, here and there, where the singers and actors come out completely from the story.

Rock of Ages is good summer fun. It's light, festive and it makes you smile. At the end, there was a striking fact. The public had fun.

Rock of Ages is presented until August 7 at the Capitole.