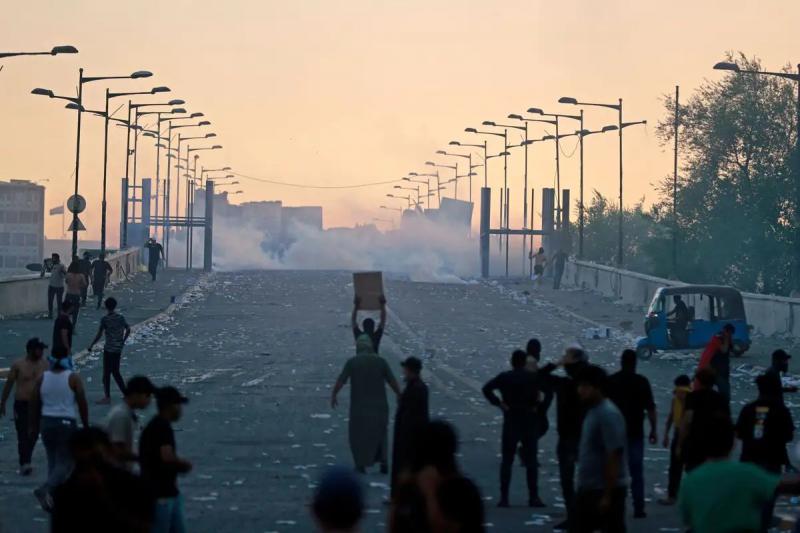 Seven members of the security forces were injured on Wednesday in rocket attacks on the Green Zone in Baghdad, when Parliament was sitting, the first in two months in an Iraq paralyzed by a serious political crisis.

At the same time, several hundred supporters of the influential Shiite leader Moqtada Sadr, gathered in a square in the center of the Iraqi capital, tried to cross a bridge leading to the Green Zone, a district housing Western embassies and government institutions, including the Parliament.

The impasse is total in Iraq, where the barons of politics have been clashing since the last legislative elections – organized almost a year ago in October 2021 – on the name of the next Prime Minister and his method of appointment.

On Wednesday, three rockets fell on different areas of the Green Zone, often targeted by gunfire or sometimes mobbed by angry protesters.

“A rocket fell in front of the Parliament building,” a joint security forces cell said in a statement, speaking of “seven wounded” among them.

In addition, about a hundred members of the security forces order and 11 civilians were injured near the bridge leading to the Green Zone in clashes between police and supporters of Moqtada Sadr, according to an official statement issued in the evening.

No information was given immediately on the perpetrators of the rocket attacks, condemned by Courant Sadrist.

This attack coincided with a session of Parliament, the first since the end of July, during which 222 deputies, out of the 235 gathered, voted against the resignation of the president of Parliament, the influential Mohamed al-Halboussi, announced his services. /p>

Experts say the surprise vote on Halboussi's resignation was in fact a vote of confidence in the Sunni politician, amid shifting political bargaining and party alliances .

The influential Shiite leader Moqtada Sadr calls for an immediate dissolution of Parliament and early legislative elections. Opposite, the Coordination Framework, an alliance of pro-Iranian Shiite factions, wants the establishment of a government before any election.

On August 29, tensions peaked when supporters of Sadr had faced the army and men of Hachd al-Chaabi, former pro-Iran paramilitaries integrated into the regular troops, and who are politically opposed to the Sadrists. More than 30 Sadrist partisans died in these fights.

The current crisis began at the end of July, when the Coordination Framework announced its candidate for the post of Prime Minister, rejected by the Sadrist camp.

Waving portraits of Moqtada Sadr, draped in flags in the colors of their country, several hundred of his supporters gathered in the morning on the emblematic Tahrir Square, in the heart of Baghdad, to criticize the holding of the parliamentary session.

“We are against the corrupt. We want to change all the politicians,” says Rassoul Chandi, 32, a member of the Sadrist Current.

“We have provided martyrs, and they want to form a government, we have no value in their eyes. “, he castigated, in reference to the violence of August 29.

Protests are also planned for Saturday in Baghdad to commemorate the third anniversary of the popular uprising launched in 2019 against the ruling class of a a country plagued by corruption and with crumbling infrastructure, despite its immense oil wealth.

“The current security situation is a reflection of the political situation,” Prime Minister Moustafa al-Kazimi summed up in a press release , reiterating “a call for dialogue” between all political forces.

The north of the country was also the target on Wednesday of missile fire and armed drone strikes, which left nine dead and 32 injured in Iraqi Kurdistan. The Iranian neighbor claimed responsibility for these bombardments targeting the Iranian Kurdish opposition established in this sector.