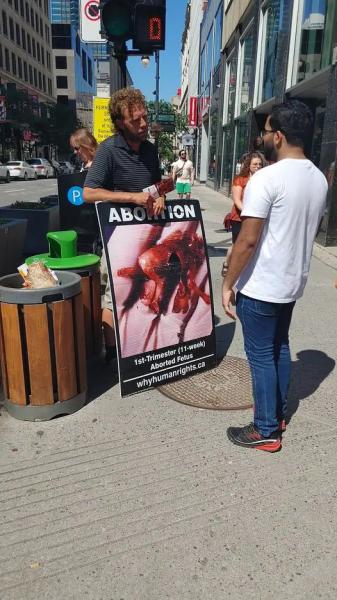 Anti-abortion groups took advantage of the historic setback in the right to abortion in the United States on Friday to make themselves seen and heard with force in Quebec.

A few hours after the US Supreme Court's decision, Maya Toussaint discovered a “graphical leaflet, filled with images of dissected fetuses” in her mailbox.

“It's violent… It's really very disturbing to know that it was distributed in my neighborhood,” says the 41-year-old woman who lives in Le Plateau-Mont-Royal, in Montreal.

Dozens of nearby residents received the same bilingual material, produced by the anti-choice group Canadian Center for Bio-Ethical Reform.

“Abortion is a violation of human rights. Help us put an end to it”, can we read.

“It is beyond me that it ended up in my trunk . My 10-year-old daughter and my 8-year-old son could have fallen on it”, is shocked Marie-Claire Lemieux, who denounces this opportunism.

“These are rights that we take for granted in Quebec, and we realize for the first time in a very long time that it is fragile,” drops the health worker and resident of Centre-Sud.

In downtown Montreal, a handful of activists from the same organization also solicited passers-by in English on Friday and yesterday, armed with extremely explicit signs.

All this sudden activity by anti-choice organizations does not come as too much of a surprise to SOS Grossesse Executive Director, Sylvie Pedneault.

“We expect them to be more and more present, that they consider they have legitimacy,” she says.

D' elsewhere, their presence is no longer visible except in Montreal. Campagne Québec-Vie, a group opposed to abortion, has recently set up shop in Quebec City, underlines Ms. Pedneault.

She denounces the strategy of the anti-choice movement, based on “sneaky” and coordinated disinformation campaigns.

For her small team, it is “a lot of wasted energy” to have to deny the false information that results from it rather than accompanying women in their decision, whatever it may be.

“We expect that many women will call us because they are confused about the information related to the termination of pregnancy [and disseminated by the antichoice]”, worries the director of one of the only three free choice organizations in Quebec.

For its part, the office of the Mayor of Montreal denounces “an initiative that does not simply has no place, neither here nor elsewhere.”

“After a dark day for women's rights in the United States, the sight of these leaflets distributed in the borough of Plateau -Mount-Royal is revolting and unacceptable,” we add.

Nevertheless, Montreal has no regulatory leverage to prevent the distribution of these flyers, the firm said in writing.

Pro-choice demonstrations are planned today in front of all Quebec courthouses.&nbsp ;

You have a scoop to us trans put?