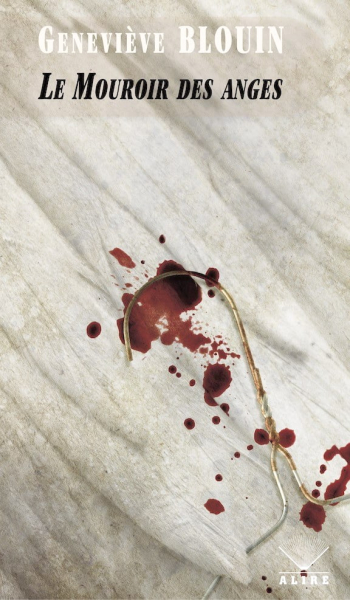 What motivates someone to forcibly abort women who were going to do it anyway? These extraordinary attacks lead to a catchy investigation!

In literary terms, Le mouroir des anges is a thriller. In effect, it is a detective story.

This means that the investigators have a life outside of their work; that they are not heroes who stand out for their eccentricities; and that they work in a police station in an uneventful suburb.

Their daily life is nevertheless suddenly disrupted by curious serial attacks, one of which turned to murder.

Curious is not an empty word. The victims are all women who have made an appointment to have an abortion, but whom the aggressor precedes by aborting them himself, wildly, in their home. He even announces himself in advance, sending them objects representing angels.

Geneviève Blouin, who has a long track record as an author, thus offers a first high-flying detective novel. Like the investigators, we rack our brains to understand who can assault women who don't know each other and who have only spoken to a few people about their early pregnancy.

The final will be at the both surprising and consistent. Good plot point!

But the dynamic between the characters is also interesting. First, because the principal investigators come from diversity, as we say today. Jacques seems of Haitian origin while Miuri is the daughter of a Japanese mother and a Quebecois father.

Opposite point of view

This is not central to the novel, but explains the reactions of the characters. Thus, Miuri arrives from Japan where the relationship to work is different from here, hence his way of immersing himself completely in the investigation. For his part, Jacques must deal with his mother's conservatism and certain remarks to be reframed at work.

The police station, however, is not a battlefield. A scene proves it, which concerns the use of abortion. The pros and cons assert their position, but without the invective that characterizes debates in the virtual world. We believe in this exchange, which takes into account the opposite point of view.

The distress of the investigators is also well conveyed. Jacques does not like the tranquility of his dear hometown to be so disturbed. Moreover, “while other police officers, no doubt stuffed with American TV series, dream of participating in the hunt for a serial criminal, he has always had a horror of these stories”.

L he author also offers a broad view of the police station team. Nicole, the secretary, plays a pivotal role in it, just as she will become central to the story, since she in turn will be threatened by the abortionist.

We are therefore entitled to a real suspense that s relies on an intellectual effort to understand a twisted logic that takes into account complex human relationships.

Really a great discovery that this novel.