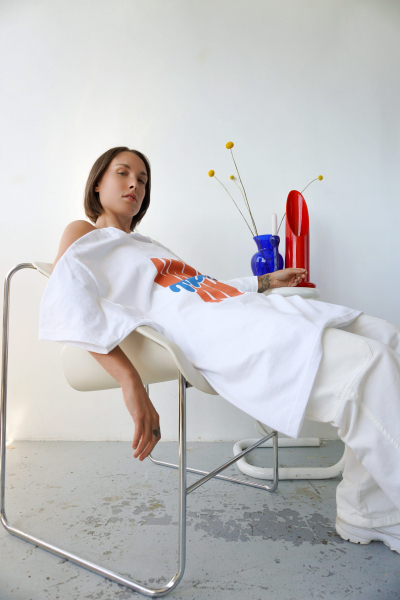 She doesn't want to hide it anymore. In her new album Emmanuelle, Rosie Valland presents herself as a 100% confident pop artist.

After having for a long time, by her own admission, unveiled “a universe on the reserves where everything was hidden and blurred”, the singer-songwriter from Granby , whom we knew thanks to his albums Leaving Before(2015) and Blue (2020) are now walking openly in the footsteps of Angèle, Justin Bieber and James Blake.

Assuming one's pop identity thus becomes a way of realizing one's childhood dreams. A first box was ticked when she heard the single No thanks on the radio, a career first for Rosie Valland.

“She was accepted at Rouge FM. I'm very proud of it. It's part of the dreams that the little girl in me had. I dream of winning a Félix, I dream of going to Everyone talks about it. It is certain that it is a more accessible album and I hope that it will resonate. »

Quite short with its eight songs and three interludes totaling 25 minutes of music, Emmanuelle(a reference to her real name Rose-Emmanuelle) also puts forward the voice of Rosie Valland as never before.

“When I listen to singers like Céline Dion, it's the voice that touches me,” she explains.

To construct minimalist, accessible and soothing melodies, Rosie Valland says she worked in the American style relying on strength in numbers.

“I have worked with a lot of people. It's an album that was made over a year, I worked with beatmakers. There was a lot of production, a lot of post-production,” says the singer, who noted that “well-made pop is complex.”

“It's not not for nothing that twenty people work on a Justin Bieber song. The best in the world compose songs that you remember in a second. In Dua Lipa's songs, there are amazing basslines. I see a lot of virtuosity. »

To the recent publication of Non merci, a parallel was quickly drawn with Angèle. On a dancing rhythm, the feminist who sleeps in Rosie Valland denounces with a refreshing without embarrassment the men of the music industry who have belittled her.

Launched earlier this week, Tour à touruses the same recipe, this time to talk about our “propensity to forget our shadowy parts”.

Like the Belgian star, electro-pop rhythms serve as joyful coating for a serious and/or sarcastic discourse.

“She is an artist whom I admire a lot in the sense that she shows that it is possible to do this in French, affirms Rosie Valland. There is a way to say things and make it sound good, be it singing and dancing. After that, I have my own universe, but it is certain that it is an influence.

*** Emmanuelle, by Rosie Valland, available October 28. Show-launch on November 23, at the Ministère, in Montreal.