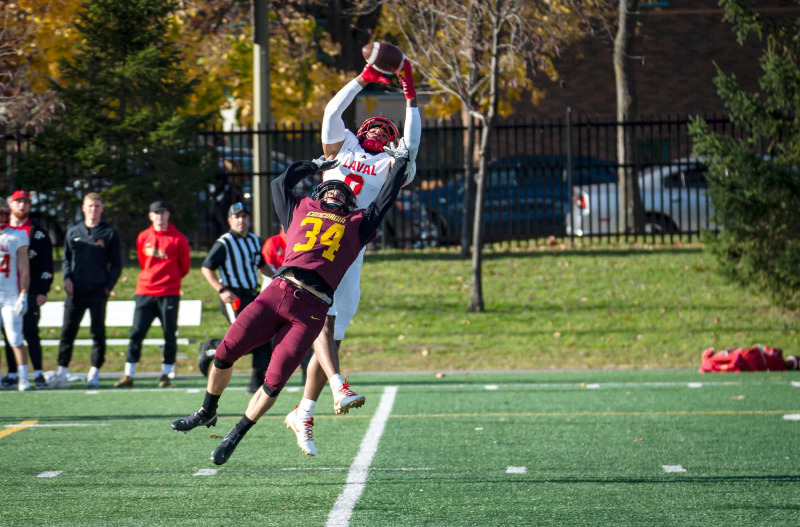 MONTREAL | The game between the Rouge et Or and the Concordia Stingers may have had no stakes, but the players still made sure to make it history on Saturday afternoon.

Spectators at Concordia Stadium got their money's worth in a duel that ended 37-24 to the advantage of the Rouge et Or and which essentially served as preparation for next week's semi-final.

Wide receiver Kevin Mital first made sure to put his name in the Quebec college football ledger with his two touchdown passes.

With 12 majors registered this fall, he equals the RSEQ's all-time record for most touchdowns in a season.

The explosive number 8 now has 19 career passing touchdowns, a record among the Red and Gold.

Arnaud Desjardins is not left out. With three touchdown passes, he finished the year with a total of 20, the second-best season for a UL quarterback. The quarterback had another excellent day at the office with 29 of 41 completions and aerial gains of 450 yards.

These individual achievements, however, did not hide the disappointment that some players and head coach Glen Constantin.

The Rouge et Or driver was not satisfied with the effort provided. The combination of a “big emotional game against Montreal” two weeks ago, the bye week and the fact that the game was without stakes had an effect on his players.

“You appeal to their competitive spirit and I think we didn't respond well. When we faced adversity, we did not do well. We took a lot of punishments for indiscipline. These are things that we will correct this week, ”he said.

Constantin had asked his players to make sure to create a big enough point gap to allow him to give his starters a little rest, something that was not respected.

“We did some good business all the same, but there was no consistency. […] We must bring them back. You have to show them that you can't just play ball. There are techniques to follow and there are things to do. »

Mital celebrated loudly after one of his games.

After being intercepted in the end zone on the first offensive series, Arnaud Desjardins was able to redeem himself with two touchdown passes to Kevin Mital. On the second major, a long play of 47 yards, Mital allowed himself to celebrate by returning backwards into the end zone. A coquetry that earned him a penalty for unsportsmanlike conduct.

“They flag so much for nothing in this league! Sometimes I get flagwhen I spike [the ball], sometimes I don't get flag when I spike. walk backwards and I get flagged. I think they would have plenty of stuff they could have flagged other than that. It's up to them,” he said, disappointed to have seen the team go out “a little slow” at the start
of the game.

The second-year player preferred to talk about the upcoming game rather than the records he had just set.

The palm of the celebrations, however, went to Édouard Arsenault. On the very last play of the first half, Arnaud Desjardins sent a long pass full of hope, which ricocheted off several Stingers players before being caught by Arsenault, diving. The 86 exulted after completing a 49-yard Hail Mary
.

“We call this game 'The Jesus'. That's a bit of luck. It flew on a couple of helmets, I was passing by then it fell that it was me who caught it, ”said Arsenault. The wide receiver still believes that he and his teammates could have done better, especially since the Stingers (2-6) will be back at TELUS-UL Stadium next Saturday.

“We wanted to throw when even a message. We played a little sloppy [sloppy]. We wanted to come out a little stronger so that they were a little more afraid to come back next week. We put a little hope in their heads and that's not necessarily what we wanted.

♦ After a seven-yard run in the fourth quarter, Alex Duff scored his first career touchdown with the Rouge et Or.

The table is set for the semi-final

MONTREAL | The Concordia Stingers may not have caused the upset and won the victory, but their performance still allowed them to sow hope for the semi-final.

< p>The two teams meet next Saturday at TELUS-UL Stadium, with a pass to the Quebec final at stake. On both sides, we wanted to make sure we got the message across.

On the Concordia side, we believe we succeeded in doing so.

“We wanted to play 60 full minutes. I think we did. Of course we would like the victory, but I think we did it well as a team, “summarized the head coach of the bees, Brad Collinson.

“I think we played our best, best football in the third quarter, that's for sure. We had the ball for a long time. And our defense was in and out. […] We have to manage to close the game when we can. It's encouraging for next week,” he added.

Stingers' Jeremy Murphy (15) tries to get rid of the ferocious cover of the Rouge et Or.

With six receptions for 141 yards and a touchdown, receiver Jeremy Murphy gave the Rouge et Or secondary a headache.

“I told the receivers before the match: “No matter the result, who cares, it doesn't change anything. We play them next week. We will play for 60 minutes, we will play physical. And this week when they're going to do video, they're going to have to have a lot of things to fix.” We hope that's what happened, ”he hoped.

Murphy, a fourth-year player, is already looking forward to returning to the Rouge et Or next week.

In the winners' camp, if the performance of the day was not to everyone's taste, we already promised ourselves to resume in seven days. We will have to do better, and no one needed explanations after the game to understand that.

“We know that the next game will be better and that we will be more motivated for the semi-final, that's for sure,” said Édouard Arsenault, who finished the game with four receptions and 95 yards, in addition to his touchdown.

“We knew it was a game that meant nothing. We made our games. And next week, we'll get back to it. We didn't want to show them everything this week,” added Kevin Mital.