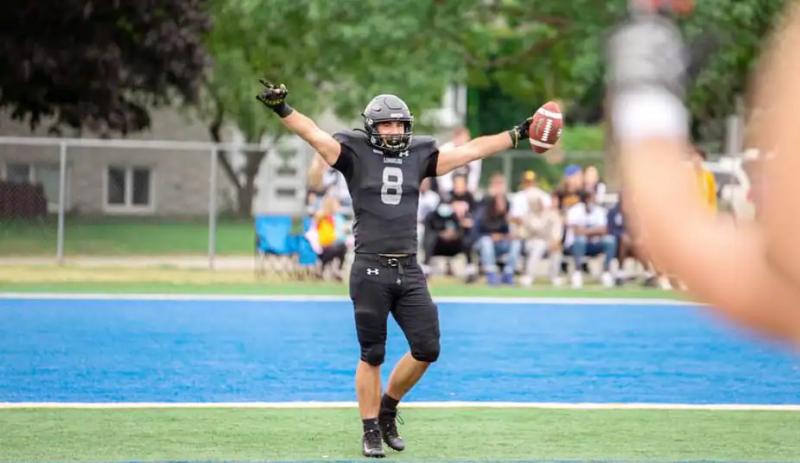 Justin Cloutier continues the family tradition by joining the Rouge et Or of Laval University.

After his father, Jacques, who wore the colors of the Rouge and Gold from 1995 to 1999, winning the program's first Vanier Cup in his senior year, and who was an assistant coach from 2004 to 2012, and Étienne who joined the Laval program in 2021, now Justin is following in the footsteps of two others.

It's no surprise to anyone, but the Limoilou Titans star linebacker officially confirmed his decision last Monday during his visit.

He was introduced to the crowd on Sunday, during the game against the McGill Redbirds with offensive lineman Jean-Simon Verreault, of the Old Montreal Spartans, who also signed with the Rouge et Or.

“The fact that my father and my brother went through Laval was an important factor in my decision,” said Cloutier, two years younger than Étienne. I really wanted to play with my brother. When I chose Limoilou, it was to play with him, but the pandemic changed the plans. We only played one game together in 2020 before the season was canceled. Étienne joined the Rouge et Or in January 2021. »

Big shoes to put on

“I already had a good idea of ​​what I wanted to do, but I knew this is where I wanted to play as soon as I made my visit, to pursue the future administration student who will be making his university debut in January. Except for Montreal, all the other RSEQ teams contacted me, but I did not make any other visits. The Rouge et Or want to use me as an inside linebacker and I really like that. »

The Rouge et Or will most likely lose the services of inside linebacker Alec Poirier at the end of the current season. The RSEQ defensive player par excellence in 2021 will make the jump to the CFL.

Like his brother, the defensive player par excellence of the Division 1 collegiate network last year gravitated to this entourage from a young age. He was a “water boy” before being promoted to “ball boy” when his father was an assistant.

This summer, along with his father and his teammate Simon Roy, Cloutier participated in NCAA program camps in hopes of gaining attention. He showed up at camps at UConn, Boston College, Notre Dame, Penn State, Youngstown and Kent.

“I haven't had any news,” he said. If I ever have any news, I'll take it into consideration, but for the moment I'm going to Laval. “

For the next two months, however, Cloutier has only one goal in mind.

“My only goal is to win the Bol d'Or, said the 6-foot, 205-pound linebacker. I don't have any personal goals in mind. We are only two starters back on defense, but the younger guys have taken over very well. Our opponents spot me more on the pitch, but I'm very happy with my start to the season. »

Finalists for the 2021 Bol d'Or after losing their flag to the Vanier Cheetahs, the Titans are undefeated until now with six wins. They've allowed just 20 points and three shutouts in their last three outings.

After a week off, Cloutier and the Titans will host Verreault and the Spartans on October 15 in a duel between the only two undefeated teams on the circuit.