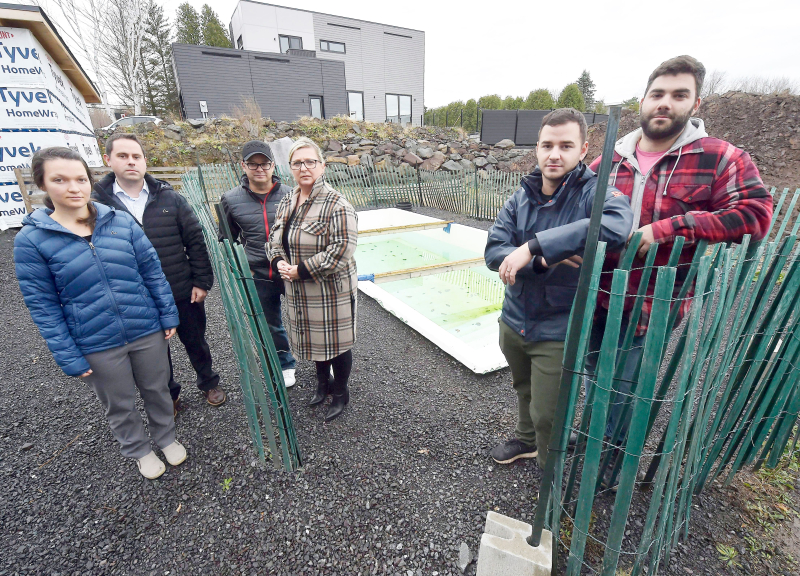 Two contractors, including a former drug dealer, allegedly threatened customers after charging them tens of thousands of dollars in extras when installing their in-ground pool, our Office of Investigation has learned .

A dozen civil lawsuits, five complaints to the Consumer Protection Office, the police arrested: several customers who consider themselves cheated have agreed to openly tell the story of the ordeal they experienced with Piscines Élégance and its subcontractor, Excava-Plus, from Quebec.

Piscines Élégance is run by Dominic Flamand, an entrepreneur who has gone bankrupt three times. Excava-Plus is owned by Patrick Laurendeau, who was convicted of drug trafficking following a major police operation to dismantle a network of cocaine and ecstasy traffickers linked to the Hell's Angels, in 2005.

The customers to whom our Investigation Office spoke all reported much the same experience: they purchased a fiberglass pool including the installation from Piscines Élégance. Excava-Plus took care of the excavation.

From the start of the work, Piscines Élégance mentioned complications, invoiced tens of thousands of additional dollars, and this, without the prior agreement of the buyers, who often did not have access to the details of these additional costs. Many are reluctant to pay for these extras, which double, triple, or even increase the initial bill eightfold.

A dozen customers who believe they have been cheated by Piscines Élégance have agreed to testify openly. Discover tomorrow the stories of Lucie Morin, Simon Comtois, Nathalie Levasseur, Bobby Hamel, Gabriel Marois and Hubert Brulotte.

That's when the nightmare begins, clients report in interviews (see other texts lower):

Those who do not pay the bill generally face a lawsuit or a legal hypothec on their house, taken as security against their will. They must then defend themselves in court. Several also decided to sue Piscines Élégance in turn.

“We are not fraudsters”

In an interview, the owner of Elegance Pools denies threatening customers.

“We are not stalkers, we are not crossers. We sell swimming pools to everyone, everyone is satisfied […] We are not fraudsters”, commented Dominic Flamand, who says he installs “175 swimming pools per summer”.

He ensures that the extras charged were justified and that the additional costs were itemized.

“Me, I have never forced anyone, I have always honored my guarantees, I have always made beautiful installations. There are never any problems with my pools,” he pleaded.

Patrick Laurendeau, of Excava-Plus, did not call us back.

A couple files a complaint with the police

Because a Quebec City client refused to pay the tens of thousands of dollars billed in extras by Piscines Élégance, the excavator and former drug trafficker Patrick Laurendeau – sitting on the mechanical shovel – would have threatened to leave with the swimming pool.

A Quebec City couple filed a complaint with the police after being threatened by Dominic Flamand and Patrick Laurendeau last summer.

Parents of four children, Patrick Lachance and Emmanuelle Brousseau retained the services of Piscines Élégance for the installation of their inground pool and their landscaping.

After more than two weeks of work, Dominic Flamand would have claimed $ 177,000 in extras, which were to be added to the $ 95,000 already paid by the couple. He would have demanded $40,000 on the spot, otherwise he left the premises without completing the work and threatened to take the house as collateral. Patrick Laurendeau, the owner of Excava-Plus, also got carried away.

“I'm going to get my shovel, take your pool out of the hole […] I have strong backs. I have money. The swimming pool that is there is mine! yelled Patrick Laurendeau, captured by a surveillance camera.

Insulted in front of their children

The couple called the police for the first time. The two entrepreneurs left the scene, but would have returned a few days later with employees to film and insult their customers. “Criss de crosseur”, “unpaid swimming pool”, “asshole”: the couple claims to have been shouted nonsense while they were with their children.

Patrick Lachance and Emmanuelle Brousseau called the police back. MM. Flamand and Patrick would have left the scene before their arrival. Piscines Élégance then sent them a formal notice for more than $165,000, in addition to taking steps to obtain a legal mortgage.

“We may lose everything because of a swimming pool”, laments the father of the family.

Questioned on this file, Dominic Flamand stressed that the swimming pool had not been removed and that he had “given the chance” to the client to “continue”.

He leaves with the pool and gets a lawsuit

The owner of Piscines Élégance faces a lawsuit of nearly $110,000 for leaving with an inground pool he had sold to a couple from Roberval .

Pierre-Samuel Larouche and Camille Gauthier bought a fiberglass swimming pool in April 2022 for some $37,800, installation included, according to court documents.

Work begins in May. While the couple has already paid more than $33,000 of the bill, Piscines Élégance is said to have claimed more than $21,000 in extras, in addition to additional amounts for the living expenses of its employees.

Dominic Flamand allegedly threatened the couple on several occasions to stop the project if these extras were not paid. The police even intervened. Due to the threats and fear of losing their pool, the customers paid $15,000, the lawsuit reads.

A few days later, Mr. Flamand reportedly demanded an additional $40,000, failing which he carried out his threat. The couple refused to comply with this request.

No threats, he says

The excavator Patrick Laurendeau would then declared to Dominic Flamand: “You have just made yourself a free swimming pool”.

Piscines Élégance would have gone from words to deeds by leaving with the pool and its accessories, goods which had been paid for, according to the couple, who are claiming from Flamand and his company more than $107,350.

< p> In a telephone interview, Dominic Flamand affirms that there were no “death threats” nor “altercation” in this file and affirms that his lawyers advised him at the time to “get out of the swimming pool out of the hole” and walk away with it, because he would “never get a check”.

“These customers, who started to do work and who did not have the means to do it, are the ones who call you today and who find it appalling. Because I'm in court today with them, and it's pretty sure that I'm going to win, ”he argued.

A father in Longueuil says he was threatened with death and feared for his safety after doing business with Piscines Élégance.

“I always told my son and my brother: What happens to me, you know who it is, ”supports Roberto Murro, in an interview with our Investigation Office.

The man hired Dominic Flamand's company in 2020 to repair his faulty pool at a cost of $21,000. But from the start of the work, “hidden defects” discovered by Piscines Élégance would have caused the bill to rise to $95,000.

Deeming this sum extravagant, Roberto Murro initially refused to pay. Dominic Flamand allegedly told him, in front of two members of his family who signed declarations to this effect: “You're much better off calling 50 police officers because someone is going to die today”, can we read in a court document.

Mr. Murro assures that Patrick Laurendeau, of Excava-Plus, was present during this threat. Fearing for his safety, Roberto Murro allegedly consented “under pressure” to Piscines Élégance completing the work for $95,000, continues the document.

Three days after the pool was installed, Piscines Élégance sent its client another bill for nearly $33,000. This time, Mr. Murro, who considered the “fraudulent maneuver”, did not pay.

In 2021, Piscines Élégance lifted a legal mortgage on its residence, which it took as collateral. Roberto Murro contested and in turn sued Piscines Elegance for $15,000. The case was settled out of court and the client paid $20,000, after several months of proceedings. “I just wanted to buy peace,” he resigns himself.

Dominic Flamand denied having threatened this client. “I never said that. I've been in business for 15 years, I've never talked to a client in the same way. Never, never in a hundred years! “, he defended himself in a telephone interview.