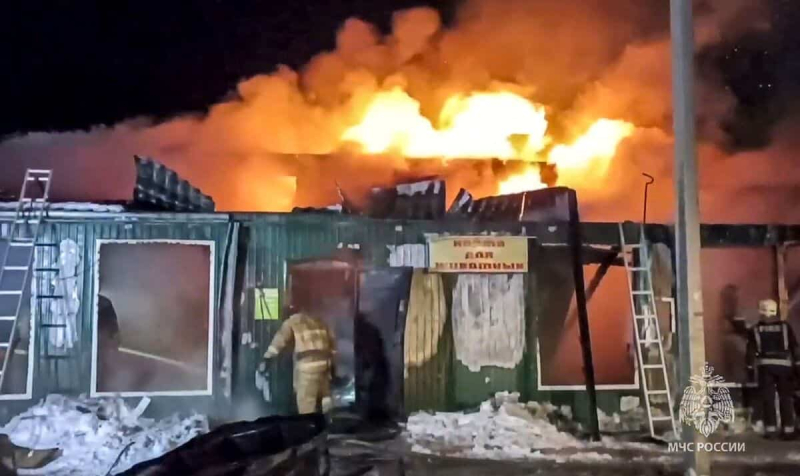 At least 22 people were killed overnight from Friday to Saturday in a fire at a residence for the elderly in Kemerovo, Siberia, in central-eastern Russia, announced investigators.

“According to the latest data, during the inspection of the site, the bodies of two other people were found. The death toll has thus risen to 22,” lamented the Russian Investigative Committee, responsible for the main investigations in the country.

According to the investigators, “six other people were injured, two of whom were hospitalized in serious condition with burns.”

The previous Russian relief report published on Telegram reported 20 dead. “At 05:25 (02:25 GMT)”, the rescue operations “were over”, they said on Telegram.

On a video published by the emergency services, we could see charred canvas and several trucks firefighters positioned near the small dilapidated establishment. The interior of the building went up in smoke.

According to the Tass news agency, the fire spread during the night over 180 m2 in a two-storey wooden building.

This private retirement home was “illegal”, according to a source in within the police, quoted by Tass.

The Investigation Committee Russian had announced earlier Saturday the opening of an investigation in particular for “negligence having caused the death of two or more people”.

“A 31-year-old man” is accused by investigators of “renting a private house as a temporary residence for” elderly people, the Investigation Committee said in a separate statement.

Investigators published a short video at the end of the morning showing the interrogation of a man with a blurred face.

The presumed origin of the fire was “a defective stove”, claimed investigators.

“The day before the incident, the tenants informed (the owner) that the boiler was defective, but he took no steps to repair the equipment,” they denounced.

“ The inspection of the premises continues, the objects necessary for the continuation of the investigation are seized. Witnesses are questioned”, can we also read in their press release.

According to the emergency services, the establishment had been “identified at the end of 2021” by the authorities and was to be the subject of an unexpected check in 2023.

“On December 7, the inspector from the National Fire Surveillance Service arrived at the establishment for an inspection visit. The management of the shelter had refused him access to the premises”, again denounced the relief workers.

The regional governor, Sergei Tsivilev, ordered him, on Telegram, that “all retirement homes , mainly private, are controlled”.

The city of Kemerovo was already bereaved in March 2018 by a fire in a shopping center which killed 60 people, including around 40 children and adolescents, a drama that had upset Russia.

Fire safety rules are not always respected in Russia, in particular because of corruption, with many property developers obtaining building permits in exchange for bribes -de-vin.

In early November, a fire in a bar in Kostroma, 300 kilometers northeast of Moscow, killed 13 people.

In 2009, 156 people were killed in a major nightclub fire in Perm, a town in the Urals in eastern Russia.