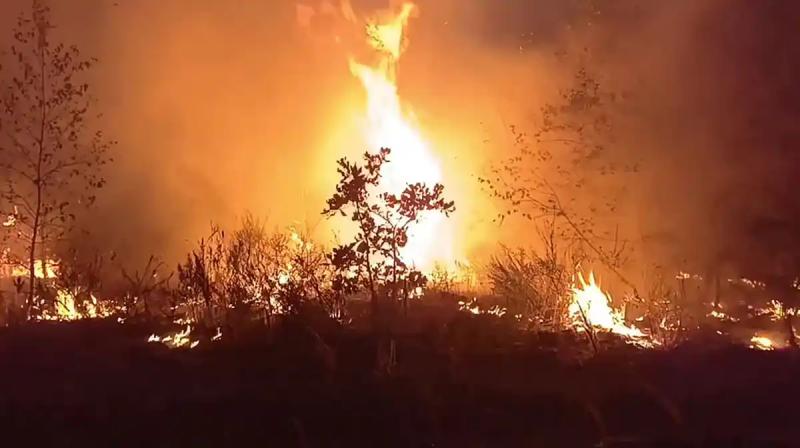 MOSCOW | Russia is facing a “difficult situation” with forest fires due to “abnormal” heat, especially in a region near Moscow, the Russian capital regularly suffering from ocher smoke, the Russian president was alarmed on Wednesday. Vladimir Putin.

“Due to the harsh weather conditions, the situation is difficult in a number of regions in the European part of the country,” Putin said during a video conference meeting with regional officials on the wildfires.

“These are above all the forest fires in the Ryazan region”, located about 250 kilometers east of Moscow, he said.

According to the local emergency services, the forest fires have devastated more than 11 700 hectares in the Ryazan region, against the background of daily temperatures exceeding 31° Celsius, accompanied by gusts of wind blowing with a speed of 10 meters per second.

More than 9,500 firefighters and rescuers were dispatched to the scene to fight the fire, as well as eight specialized aircraft and seven helicopters, said the region's acting governor, Pavel Malkov, for his part. during the meeting chaired by Mr. Putin.

“It's a very tough test”, he lamented, stressing that there is “no precipitation and we don't expect any soon.”

Mr. Malkov, however, said he was confident that the fires “will be brought under control within two or three days and fully extinguished within one or two weeks”.

Last week, smoke caused by these fires, which had been going on for days, finally blanketed parts of the city of Moscow. Again on Monday, smoke and the smell of burning were present in several districts of the capital.

The Moscow City Hall reacted strongly by dispatching 8,500 men to the Ryazan region to put out the fire, as reinforcements to a thousand firefighters and local rescuers already mobilized.

Russia has been hit in recent years by serious forest fires, particularly in Siberia and the Far East, gigantic and difficult to reach areas.