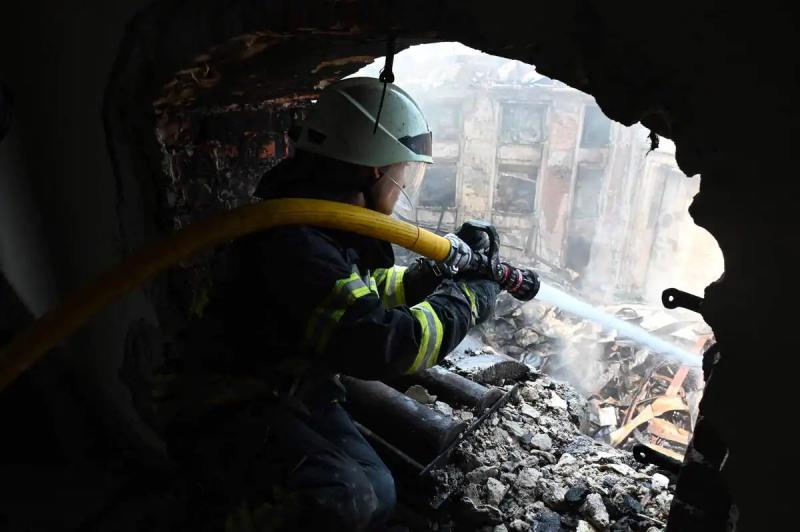 Two Russian villages were evacuated on Thursday due to a fire that broke out at an ammunition depot near the border with Ukraine, local authorities said.

This fire comes a few days after explosions at a military base and an ammunition depot located in Crimea, a Ukrainian peninsula annexed by Moscow, Russia recognizing in the latter case an act of “sabotage” by Kyiv.

“An ammunition depot caught fire near the village of Timonovo,” located less than 50 km from the Ukrainian border in Belgorod province, regional governor Vyacheslav Gladkov said in a statement.

< p>There were no casualties, but residents of Timonovo and the nearby village of Soloti were “moved to a safe distance”, he said, adding that authorities were investigating the reasons for the fire.

In a video posted on social media, a huge ball of fire could be seen releasing a thick column of black smoke. In another video, several explosions in close succession could be seen in the distance.

The fire that broke out on Thursday comes amid an outbreak of explosions affecting Russian military installations near Ukraine.< /p>

At the beginning of August, the explosion of ammunition intended for military aviation near the military airfield of Saki, in Crimea, caused one death and several injuries.

A few days more later, it was an ammunition depot in Crimea that was blown up by explosions. In the latter case, Moscow has admitted, in a rare occurrence, an act of “sabotage”.

Since the beginning of the Russian offensive in Ukraine at the end of February, Moscow has repeatedly accused Ukrainian forces of having carried out strikes on its soil, in particular in the Belgorod region.

Last month, missiles fell on the city of Belgorod, the capital of the province, killing four people, according to the local authorities.

In early April, Mr. Gladkov accused Ukraine of carrying out an attack on a fuel depot in Belgorod with two helicopters.