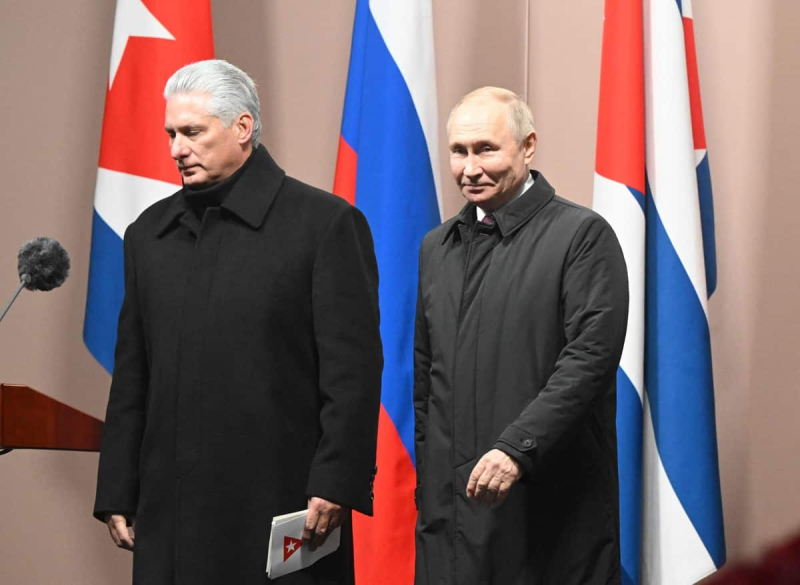 Russian President Vladimir Putin and his Cuban counterpart Miguel Diaz-Canel, visiting Moscow, displayed a united front on Tuesday against the “Yankee empire”, the United States, which the man fort of Havana called it a “common enemy”.

Mr. Diaz-Canel is one of the few foreign leaders to have made the trip to Russia since the start of Moscow's offensive against Ukraine in February, strongly condemned around the world.

And the statements of the two leaders had overtones reminiscent of the Cold War era, when Cuba was at the heart of the confrontation between the Americans and the Soviets.

“The Soviet Union (then) the Russia have always supported the Cuban people in their struggle for independence, for their sovereignty,” Mr. Putin told Mr. Diaz-Canel at the start of a bilateral interview broadcast on television.

“They have always opposed various types of restrictions, embargoes, blockades”, he added, while Moscow has been the target of heavy international sanctions since the end of February and the start of its military offensive in Ukraine.

The Russian president was pleased to “see Cuba adopt the same position (today) towards our country”.

The two leaders also inaugurated in Moscow a statue of the revolutionary Fidel Castro, who ruled Cuba for nearly 50 years and died in 2016.

Mr. Putin hailed “a brilliant person” who “was able to analyze everything that was happening in the world.”

Mr. Diaz-Canel, in power since 2019, for his part deplored the American “imperialism” that Mr. Castro had always hated.

“Russia and Cuba are subject to unjust sanctions and arbitraries that continue, and (both countries) have a common enemy, the Yankee empire that manipulates much of the world,” he lamented.

“The world must ask itself: why do we have rules? Who is imposing these rules?” he asked, pointing directly to the United States, kyiv's diplomatic and military ally against Moscow since February.

Despite the Relative relaxation between Washington and Havana in recent years, their relations remain marked by deep differences, particularly on the migration issue.