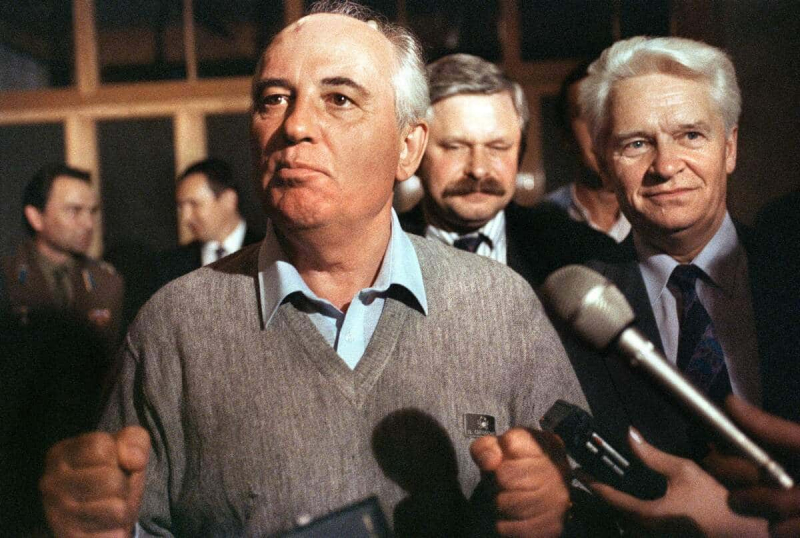 Thousands of Russians bid farewell to the Soviet Union's last leader Mikhail Gorbachev on Saturday in an unofficial funeral, mostly marked by the absence of President Vladimir Putin.

Mikhail Gorbachev, who died Tuesday at the age of 91, was buried in the Novodevichy cemetery in Moscow, alongside his wife Raisa, who died in 1999, while a military orchestra played the Russian national anthem, found the AFP.

Earlier, the remains of this major political figure of the 20th century had been displayed in the House of Trade Unions, an emblematic place in Moscow where the funerals of several leaders of the USSR were celebrated, including those of Joseph Stalin in 1953.< /p>

'A great politician is leaving, the Gorbachev era is ending today,' said Yevgeny Matveev, a 44-year-old miller who was among thousands who came to bid farewell to the old leader.

In small groups, people of all ages came to lay roses and bow in silence before Gorbachev's open coffin, flanked by an honor guard and near which sat his black-and-white portrait.

< p>Coming to power in 1985, Gorbachev made history by precipitating, in spite of himself, the disappearance of the Soviet empire in 1991, when he tried to save it with democratic and economic reforms, thus ending the Cold War.

In the current context of increasing repression and withdrawal amid Moscow's military intervention in Ukraine, some Russians present at the funeral remembered with nostalgia the liberal overture under Gorbachev.

“We had a whiff of freedom, he gave us transparency and pluralism,” said Natalia Leleko, a 60-year-old teacher.

Ksenia Joupanova, a 41-year-old performer, remembers above all “the absence of fear” under Gorbachev. “I am against cutting oneself off from the rest of the world, I am for openness, dialogue”.

But if he is hailed in the West and by some Russians as a man of peace, Gorbachev is also seen by many in his country as the person responsible for the geopolitical downgrading of Moscow and the years of crisis that followed the fall of the USSR.

As a sign of discomfort with this ambivalent legacy, neither official funerals nor a day of national mourning have been announced. Above all, the funeral took place without Vladimir Putin, the Kremlin highlighting a busy “schedule”.

Hungarian Prime Minister Viktor Orban, close to the Kremlin, is the only foreign leader to have visited Moscow, where he bowed before the remains of Gorbachev, AFP noted.

Gorbachev was one of the reasons that enabled Central Europe to “get rid of communism peacefully, without loss of life or bloodshed,” Orban said on Facebook.

If he was absent on Saturday, Mr. Putin had discreetly visited Thursday at the Central Clinical Hospital (TSKB) in Moscow, where Gorbachev died, to lay a bouquet of red roses.

In a sober message of condolence, he granted Gorbachev “great influence over History of the world”.

By contrast, Western capitals, from Washington to Berlin, via Paris, warmly celebrated the memory of Gorbachev, hailed for having worked for East-West rapprochement and a reduction in nuclear arsenals, which in 1990 had earned him the Nobel Peace Prize.

Germany, whose reunification was made possible by the fall of the Berlin Wall, announced that the flags would be at half mast in the German capital on Saturday.

But, in Russia, Gorbachev is seen by many as the gravedigger of the great Soviet power that rivaled America and whose end, considered humiliating, gave way to a decade of crises and violence.

< p>Boris Yeltsin, the first president of Russia in power during the years of painful transition to the market economy, and who had appointed Vladimir Putin as his successor, was entitled to strong honors at his death in 2007.

The Kremlin then declared a national day of mourning. onal and organized an official funeral. In the presence of Vladimir Putin and Mikhail Gorbachev