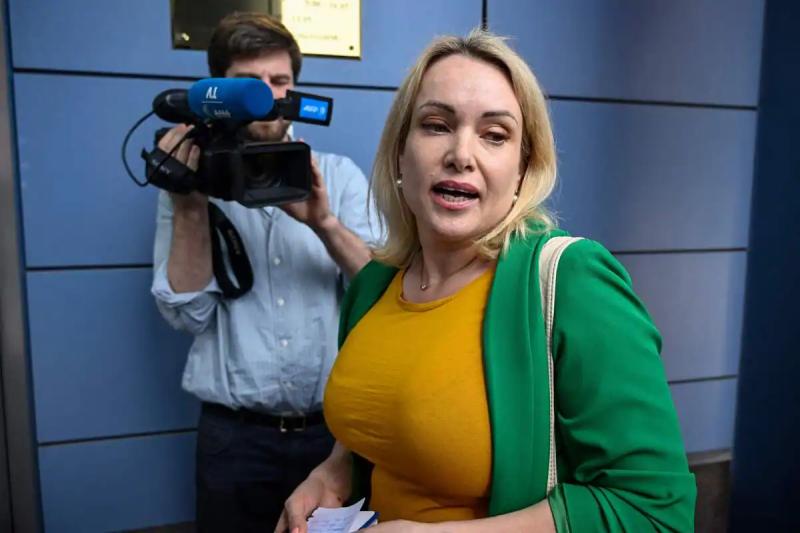 MOSCOW | Four trials and one arrest. Since her return to Russia, journalist Marina Ovsiannikova has been intimidated by the authorities and has redoubled her efforts, in the face of criticism, to prove the sincerity of her opposition to the conflict in Ukraine.

On March 14, she interrupted live the newspaper of the first Russian channel where she worked, Pervy Kanal, with a sign against the offensive launched by Vladimir Putin. A gesture that went around the world and changed her life.

After this coup, she announced that she would stay in Russia, but finally joined the media for three months Die Welt in Germany.

While she was away, her ex-husband, an employee of the pro-Kremlin RT channel, sued her to deprive her of custody of her two children and prevent her from taking them abroad.

Consequently, Marina Ovsiannikova, 44, told AFP that she made “the difficult decision” to return to Russia in early July.

“I decided to play Russian roulette she says, wearing an elegant black dress, sitting on a bench in central Moscow, after dropping her daughter off at a private school for summer lessons.

The one who lived comfortably working 19 years for state television is now one of the last voices in Russia to loudly condemn the conflict in Ukraine. Other influential critics are imprisoned, keep a low profile, or are in exile.

“I am a fighter, I continue to actively denounce the war, I do not plan to stop, I have no not afraid despite the intimidation”, proclaims Marina Ovsiannikova, in her high-pitched and cheerful voice.

Since her return from exile, she has come to support the imprisoned opponent Ilia Yachine in court, demonstrated not far from the Kremlin with a sign calling Putin a “killer”, and regularly publishes messages online denouncing the government.

People are “shut up”

Despite the risks, she also continues to participate in current affairs programs broadcast by Russian opponents on social networks.< /p>

Because of her criticism, she was briefly arrested in mid-July by police near her home and fined in two trials for statements against the offensive in Ukraine.

She must be tried again on August 8 for having “discredited” the army, not to mention the trial to keep custody of her children.

In addition, Marina Ovsiannikova still faces hostility from part of the Russian opposition and Ukrainians who accuse her of having been a “propaganda”, and that of the pro-Kremlin who consider her a traitor.

Some accuse her of having turned around out of opportunism, for her career, because she has obtained immense international visibility. Marina Ovsiannikova calmly refutes.

“It is useful for the power to constantly create conspiracy theories against me, people no longer know who to believe,” she says, while calling for “uniting and supporting » all opponents of the Kremlin offensive.

She admits mistakes: having stayed “too long” in her bubble, without “finding the strength” to change jobs. For her, this inaction and indifference, embraced by many Russians, is a fear-fueled form of ‘self-preservation’.

“Our people are really, really scared. Even those who understand all the absurdity and the horror in progress prefer to be silent”, she maintains, believing that the Russians criticize the power “in their kitchen”, sheltered from indiscreet ears, as during the USSR.

She also explains that she has an “unenviable” situation, threatened from all sides and faced with a “family war”. But she stresses that her problems are “trifles”, compared to the suffering of Ukrainians.

It remains to be seen whether her activism will earn her criminal prosecution for “disseminating false information” about the army, a crime punishable by 15 years in prison. Dozens of people are already prosecuted in Russia for this reason.

On this point, she is torn between hope and fatalism. According to her, the power could be reluctant not to give more echo to her famous protest on television, and because she says she has “solid international support”.

But her face closes when we asks her whether or not she will leave Russia in the event of criminal proceedings. “It's hard to say, I live from day to day,” she replies after a frank hesitation.

“We can find a law to punish each person,” adds Marina Ovsiannikova, taking up a sinister aphorism dating from the Stalinist terror. “If they make this decision, they will arrest me during the day, it will take a few seconds.”