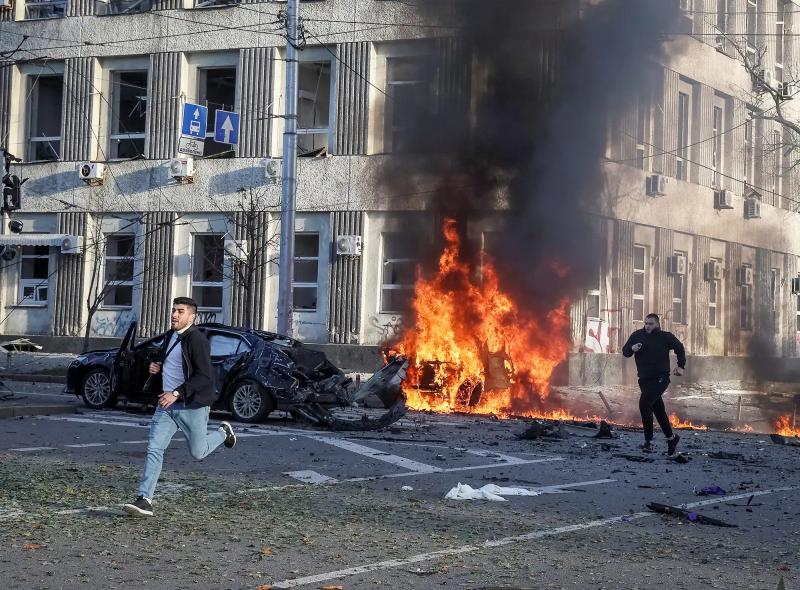 Ukraine has accused Russia of being a 'terrorist state' for killing civilians in strikes in Kyiv and other major cities in retaliation for the destruction of a bridge in Crimea .

“They are trying to destroy us all, to wipe us off the face of the Earth,” Ukrainian President Volodymyr Zelensky reacted on Monday morning as Russian missiles hit cities Ukrainians.

But “Ukraine cannot be intimidated”, he then launched in his evening speech, promising to repair all that was destroyed.

Russian President Vladimir Putin justified the bombardment by the “terrorist” attack in Kyiv two days earlier against the bridge connecting Russian territory to Crimea, the Ukrainian peninsula annexed by Moscow in 2014.

“Ukrainians are able to do things they shouldn't be able to. Even if this bridge was presented as invincible, there was the strike at the end of the week”, analyzes Dominque Arel, holder of the Chair in Ukrainian Studies at the University of Ottawa.

The police examine a victim of the Monday's bombing in Kyiv.

Monday's Russian strikes left at least 11 dead and 89 injured in Ukraine, according to the latest police toll. Important infrastructure has been affected in eight regions, in addition to the capital, which has been spared since June.

“They want to destroy the energy system”, estimated Mr. Zelensky, while power cuts affected many regions.

Vladimir Putin said on Monday that Russia has carried out a “massive” bombing campaign against Ukraine's energy, military and communications infrastructure.

He promised harsh retaliation in the event of further Ukrainian attacks on Russia. The strikes “achieved their objective”, assured the Russian Ministry of Defense.

Ex-Russian President Dmitry Medvedev, current number 2 of the Moscow Security Council, affirmed that the strikes of Monday were only a “first episode” and called for the “total dismantling of the political regime of Ukraine”.

Crater caused by a Russian bomb Monday in Dnipro.

According to President Zelensky, 43 of the 84 missiles and 13 of the 24 Russian drones launched against Ukraine were shot down.

Half a dozen explosions were heard in Kyiv, with strikes on several neighborhoods, including the city center, which notably pulverized a children's playground.

“There is no military target. They are just killing civilians,” said Ksenia Riazantseva, a resident of the neighborhood.

“This demonstrates, paradoxically, the great weakness and extreme immorality of the Russian army. Being unable to beat the Ukrainian army on the ground and protect their military installations, they are going after civilians,” confirms Mr. Arel.