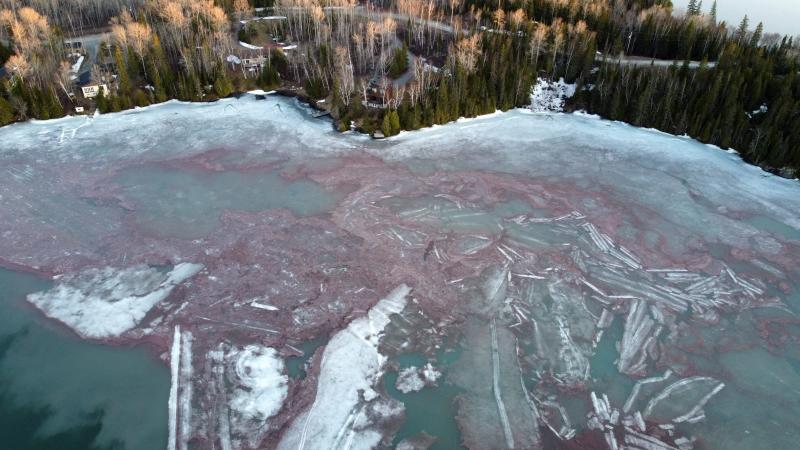 The number of lakes whose state is considered very worrying reaches a peak since The Journal presents its great summer file. And the blue-green algae problems seem to be getting worse.

These data are not only worrying for the environment. A lake in poor health has considerable economic impacts and can even lower property values. We are particularly interested in this aspect this year in our dossier.

According to the most recent data from the Voluntary Lake Monitoring Network (RSVL), i.e. for the year 2021, there are now 21 lakes in a very worrying state. They are kind of dying. 4 years ago, when we made this first list, we had 15.

The trail left by a boat on Lake Saint-Augustin, near Quebec, shows the extent of the cyanobacteria problem in 2020

TIP OF THE ICEBERG

Lake quality monitoring is still based on fragile foundations. It depends on the work of volunteers, and it is far from being all of the 3.6 million freshwater bodies in Quebec that are analyzed.

The fact that the Department assumes, since last year, 75% of the cost of the analyzes has been able to mobilize organizations that had to pay entirely out of pocket.

“There is a lack of funding, there is a lack of knowledge and the RSVL, we will not hide it, it is a minimum, deplores Mélanie Deslongchamps, general manager of the AGIRO organization, which intervenes in the basin. slope of the Saint-Charles river in Quebec. And it is the citizens who pay for it. It's not too expensive a follow-up for the government, but it's not a real portrait.”

Cyanobacteria (blue-green algae) problems seem to be getting worse. “Last year was the worst year at Lac Saint-Charles,” says Ms. Deslongchamps. We have never had so many blooms of cyanobacteria as last year. We talk to each other between organizations and we all said to each other that it was a big year. Lac Saint-Augustin was terrible.”

Sébastien Sauvé, professor of environmental chemistry at the University of Montreal, who is currently leading one of the largest research projects on cyanobacteria in the world, remains more cautious. “It's not easy to have a quantitative assessment for the whole year for all of Quebec, but there is no indication that it is improving,” he said.

Sébastien Sauvé , a researcher at the University of Montreal, believes that the lack of follow-up on cyanobacteria is a political choice.

However, he mentions a troubling phenomenon: a winter bloom of pinkish cyanobacteria called Planktothrix rubescenshas been observed in winter since 2020 under the ice of Lake Fortune in Abitibi, which is rather rare.

This cyanobacterium, which can be toxic, has already been observed elsewhere in the world. “But often, these are one-off and non-recurring phenomena [unlike Fortune Lake],” explains Lawrence Gervais, coordinator at the Témiscamingue watershed organization (OBV).

Fortune Lake has taken a amazing pink color last winter, due to a potentially toxic cyanobacterium.

Researchers from the University of Quebec in Abitibi-Témiscamingue are still trying to establish the causes. As the Ministry did not have an employee to sample the lake, the OBV went there. The local association is also very involved.

“We find it unfortunate that there is no structured program at the Ministry of the Environment for this kind of problem, we are improvising”, recognizes Ms. Gervais, who nevertheless specifies that the work is progressing well and that it is carried out by researchers who will be able to produce rigorous scientific data.

The number of reports is exploding

Meanwhile, the Ministry of the Environment has not been monitoring the number of affected water bodies for 5 years. It only focuses on the most sensitive ones.

“Since 2017, the Ministry has therefore no longer kept a record of the bodies of water affected,” says publicist Caroline Cloutier.

Inspectors move only if a report concerns a lake that was not yet known to have cyanobacteria or it is used to supply drinking water, for example.

Despite the increase in reports, the ministry only visited six lakes in 2021, one more than in 2019, a year when there were four times fewer reports. The presence of cyanobacteria has been confirmed in four of the six water bodies.

Without monitoring, no one can tell if the increase in reports reflects an escalation of the phenomenon, or simply an increase in the number of people concerned following the media coverage of the problem.

The Ministry explains that it focuses its interventions instead on the sources of phosphorus discharge, which are the main cause of blue-green algae.

These sources include, for example, “the spreading of manure in agricultural areas , municipal water purification works or septic installations”. Moreover, since 2019, the number of inspections carried out in the agricultural sector has doubled.

But this strategy does not provide a portrait of the evolution of the problem. “We talked a lot about reducing phosphorus, so the communities of cyanobacteria that loved phosphorus have kind of disappeared. But [the cyanobacteria] which like nitrogen are favored because we haven't worked on nitrogen”, underlines Mélanie Deslongchamps, general manager of AGIRO.

You have a scoop to send us ?