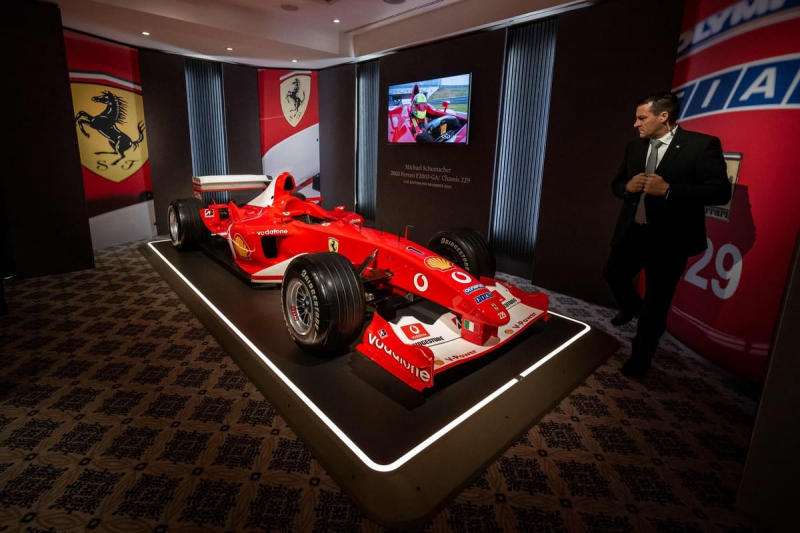 A Formula 1 Ferrari driven by legendary German driver Michael Schumacher in 2003 was sold on Wednesday for the record sum of 14.63 million Swiss francs (about 20 million Canadian dollars) during a sale of the Sotheby's house in Geneva.

The F2003-GA Chassis 229 with which Michael Schumacher won numerous races in the 2003 season recorded “a record price for a Formula 1 of the modern era”, said the Sotheby's auctioneer, knocking down his hammer after a final offer of 13 million Swiss francs (14.63 million including fees).

That's almost double the record of 7.5 million dollars held by another Ferrari car also driven by the German champion, during the 2001 Formula 1 season and already sold by Sotheby's in 2017 in New York.

This Wednesday's exceptional lot was estimated at between 7.5 and 9.5 million Swiss francs, but after a breathtaking auction, it was a buyer who raised the price by 500,000 francs all at once who won the car. .

The identity of the new owner is not yet known but the auction house has indicated that he is from Europe.

Sales of this type cars with such a pedigree are rare.

“It is one of the Ferraris with the most victories in the history of the brand, so it is a very important car in the history of the automobile”, explained to AFPTV Vincent Luzuy, from the branch dealing with luxury car sales at Sotheby's, during the presentation of the car to journalists.

“It was developed by two engineers – Rory Byrne and Ross Brawn – who decided to have a slightly longer +wheelbase+ (wheelbase) to work on the aerodynamics”, he explained.

It was at the wheel of this car, introduced at the 2003 Spanish Grand Prix, that Schumacher won five victories that season, in Spain for his first outing and then in Austria, Canada, Italy and the United States.

Michael Schumacher, who will win another seventh world championship title in 2004, n hasn't been seen in public since a terrible skiing accident in December 2013 in France.

Blue as a diamond

Sales are continuing and jewelery enthusiasts will be able to try to acquire a delicate blue diamond at the start of the evening – unset – estimated between 10 and 15 million Swiss francs.

It is one of eight diamonds in De Beers' “Exceptional Blue Collection”, a stunning group of rare vivid blue diamonds, whose total value exceeds $70 million. dollars. Only one gem will be auctioned in Geneva, the others will be offered later in New York and Hong Kong.

Another significant lot from the sale of Sotheby's jewelry pieces in Geneva, a bracelet of emeralds and of fine diamonds from the 1850s (estimated between 60,000 and 80,000 CHF), from the collection of Empress Eugénie (1826-1920), wife of Louis-Napoléon Bonaparte.

There will also be auctioned a brooch designed by jeweler Jean Schlumberger adorned with diamonds and a pink sapphire of 92.01 carats, from the 1950s (estimated between 300,000 and 500,000 CHF), from the collection of Fiona Thyssen-Bornemisza.