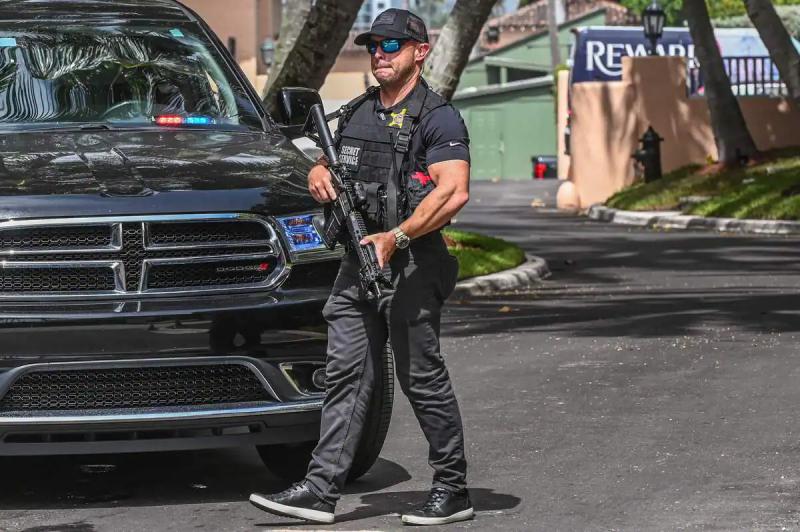 WASHINGTON | The search carried out by the American Federal Police (FBI) at the home of former President Donald Trump in Florida, as spectacular as it is unprecedented in the United States, suggests that the former leader is the subject of an investigation by the Department of Justice.

But there remain many unanswered questions surrounding the circumstances and motivations behind this raid. Here is what we know at this stage on Tuesday and the questions it raises.

Monday morning, about thirty agents of the FBI according to the son of Donald Trump, Eric, landed at the luxurious residence of the former president in Mar-a-Lago, Florida (southeast). Mr. Trump was in New Jersey (east) at the time.

No restraint was necessary, as FBI agents had previously notified the President's Protective Service of their arrival and of the searches, NBC reported.

Once inside, they searched the home for several hours, including a safe according to Donald Trump. They seized numerous paper documents, online newspaper Politico said, citing a source familiar with the matter.

“Never has anything comparable happened to a former president of the United States,” Mr. Trump said in a statement on Monday, denouncing a coup “neither necessary nor appropriate” and saying he was the victim of “political persecution. ”.

Neither the Department of Justice nor the FBI made no comment, observing a total silence.

But according to experts, such a search against a former president, who could represent himself in 2024, necessarily had the endorsement of Attorney General Merrick Garland and FBI Director Christopher Wray.

The FBI will necessarily have needed a search warrant, and the judge will have needed enough evidence to support a possible offense or crime to issue it.

To date , no warrants have been made public.

And according to Seamus Hughes, a criminal expert at George Washington University, the warrants in the district of South Florida where Mar-a-Lago is located generally remain under seal.

“Each local jurisdiction determines its own rules in this area,” he explains.

Eric Trump, however, revealed on Fox News on Monday that the search related to documents taken by the former president when he leaves the White House in January 2021.

However, according to the organization, classified files were there and it informed the Department of Justice.

“The object of the raid, according to what they said, was c 'was to see if the former president was still in possession of documents,' said Eric Trump.

A president can keep records?

A presidential records law states that all official records of a sitting president must be turned over to the National Archives upon his departure. But this law does not really provide for sanctions.

In contrast, US law strictly prohibits anyone from keeping classified documents and has already been enforced on several occasions, including imprisonment.

CNN reported that officials from the Department of Justice had visited Mar-a-Lago in June, including the head of the intelligence and export control section, which deals with cases related to national security, espionage or sabotage.

Is ex-President Trump under investigation?

Not necessarily. By themselves, the searches conducted on Monday do not mean that Mr. Trump is the subject of a criminal investigation.

The documents may very well have been seized in connection with other investigations targeting members of the former Trump administration or as part of the investigation into the assault on the Capitol on January 6, 2021.

The fact remains that, according to experts, the extent of this search targeting a former president suggests something more important.

Former FBI Deputy Director Andrew McCabe told CNN on Tuesday that it seemed inconceivable to him that the searches were taking place to recover documents destined for the National Archives.

“The idea that 'they would have done this simply because they had not obtained satisfaction (…) seems unthinkable to me. It seems to me that they must have much more than that”.

Former US President Donald Trump, who on Monday strongly denounced the FBI's search of his Mar-a-Lago residence in Florida, is cited in several civil, criminal and parliamentary investigations.

None charge against him is not yet known.

The search conducted Monday by the federal police could be , according to American media, linked to the question of Donald Trump's archiving of documents related to his presidency.

The law obliges him to transmit all of his e-mails, letters and other working documents to the American National Archives, yet he had taken, when he left the White House, fifteen boxes of documents, which agents of the Archives had to recover in January, already at Mar-a-Lago.

The federal police have asked the American courts to open an investigation into these facts, which have not yet given rise to no prosecution.

Neither the FBI nor the courts gave any indication of the reasons for Monday's search.

The parliamentary inquiry into the assault on the Capitol

The House of Commons Inquiry into the Capitol Storm recently showed the extent of the pressure Donald Trump exerted on election officials after Joe Biden won the 2020 presidential election.

The members of this commission considered that the former president had, at the very least, “failed in his duty as commander-in-chief”. Each person responsible for the events of January 6, 2021 will have to “answer for (his) acts before the courts”, added its Democratic president, the elected Bennie Thompson.

But if the work of the commission was largely publicized, they do not lead directly to legal proceedings: it is up to the Ministry of Justice to decide on any possible criminal consequences.

The criminal investigation into the assault on the Capitol

Are they planning to trace White House officials, or even 'to the president?

That's the dilemma facing Merrick Garland, the attorney general appointed by Joe Biden, who has authority over the prosecution.

Known for being methodical and prudent, the minister excludes nothing. “Everyone who is criminally responsible for efforts to nullify the election will have to answer for their actions,” he said.

For the time being, Donald Trump does not seem to be directly targeted in this investigation.

According to several jurists, he could possibly be prosecuted criminally for “obstructing an official procedure” or on a very broad count of “ fraud in the government” which involves having disrupted the functioning of the institutions.

But, faced with his probable new candidacy for the presidency in 2024, any action aimed at him will be perceived as political.

In addition, a Georgia prosecutor announced in February 2021 the opening of an investigation into “attempts to influence the electoral operations” of this state in the southern United States, rather conservative, but won by Joe Biden. Investigations are continuing in 2022.

In a telephone call, the recording of which was later made public, Donald Trump asked Brad Raffensperger, a senior Georgia official, to “find” nearly 12,000 ballots in his name, enough to catch up in this state. .

The Manhattan prosecutor is investigating, in a criminal case, suspicions of fraudulent valuation of assets in within the Trump Organization — which includes golf clubs, luxury hotels and other properties of the real estate magnate — to obtain more advantageous loans from banks, or to reduce his taxes.

The conglomerate and its chief financial officer have been indicted for tax evasion, and a trial is expected in 2022.

She is by came at the beginning of the year to obtain that a judge order in particular Donald Trump to testify under oath. A hearing scheduled for mid-July has been postponed.