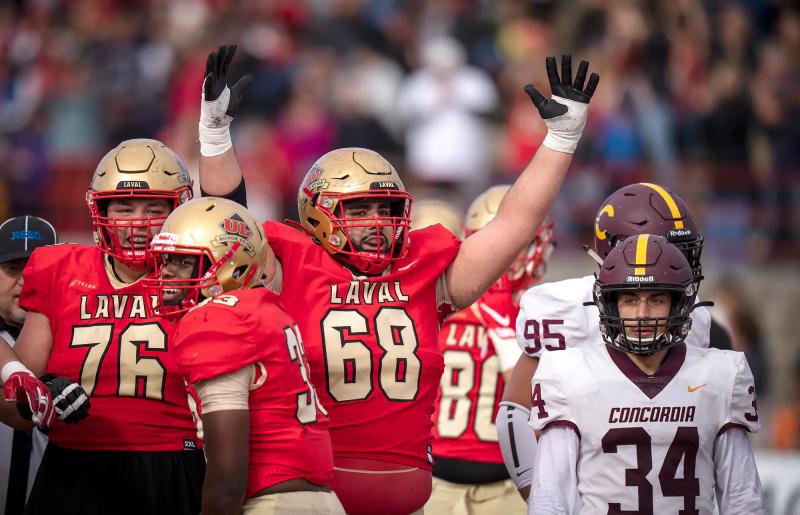 The 2022 season is one of many firsts for Alexandre Masri-Fliss.

The second-year guard donned the uniform for the first time during the game opening against Green & Gold from the Université de Sherbrooke and got his first career start last Sunday against the Concordia Stingers.

He will be back as a starter on Sunday against the McGill Redbirds.

“I had my baptism and it was really a great experience,” he said. It happens once in your life and I took advantage of it. It went well even if I still have a lot of work to do, and the team gave a good performance. It was a good way to start. »

In the crosshairs of several university teams after a fine college career, Masri -Fliss had to be patient last year.

“Everyone aims to contribute to the success of the team and I was looking forward to playing, but it was a necessary step in my journey, summed up the CNDF product. I needed a learning season and that was part of my progression. “

” You want to play as soon as possible, to pursue the occupational therapy student, but I realize with hindsight that I was not one of the best elements on the offensive line last year. Laval is a big program and you have to understand that the success of the team comes first. I trusted the coaches because they knew what they were doing.”

Masri-Fliss identifies two aspects that he has improved and which now allow him to evolve as a starter.

“ My understanding of the system is much better and it allows me to focus on the football instead of thinking about what I have to do, he explained. It makes a big difference. Last year, my head was spinning and I was thinking a lot.

“I'm also in much better physical shape,” added the 6'3″ and 308-pound guy. I lost 20 lbs. I am lighter and fitter. I am more active and I eat better. The year of COVID-19 has been difficult for the physical condition of offensive linemen. I realize now that you have to be in shape to play on the offensive line and not just big. I'm not where I want to be yet, but I'm headed in the right direction.Although he found this first campaign difficult, Masri-Fliss spoke with a few elders who helped him to better accept his situation.

“Cyrille Hogan-Saindon and Louis-Gabriel Beaudet were dominant players at the university level and they were not dressed in their first seasons, he underlined. I realized that was normal. I had no complaints after just one season. They told me not to feel sorry for myself, to work on my technique and my understanding of the game system. They were right.

“Considering where he was in 2021 when he was not ready at all , he did very well against Concordia, mentioned the Laval offensive coordinator. It was so difficult and now he is showing great aggression. It moves well too.

Éthier draws a parallel between Masri-Fliss and Samuel Quevillon.

“The two were highly sought-after players and they present a similar profile, he specified. Last year, Samuel was more ready for the end of the season than Alexandre, but both have suffered from the pandemic. »

“It's been part of my game since I started playing school football. It's a quality that I try to demonstrate in every practice and every game. »

Nicolas Guay back in his slippers

Nicolas Guay has regained his good old slippers from his years in school and college football.

Used as a guard for the last four seasons in Laval, Guay will return to the center position replacing Nicolas Thibodeau , injured his ankle in the last game against the Concordia Stingers.

Guay was drafted as a center, but only played one game in his rookie season, in 2017, due to an injury to Louis-Gabriel
Beaudet, before being moved to the guard position in 2018.

“I wasn't rusty when I took over for Nicolas during the game against Concordia,” he said. I was well prepared. I took several rehearsals as a center at camp in Hamilton. Because I played center all my school and college years, I was not out of place. ”

Guay assures that he has no preference.

“I like both positions and I am comfortable in both positions, indicated the CNDF product. This will be my second start as a center with the Rouge et Or. Before each game, I make discounts with Nicolas and Étienne [Cloutier]. »

A seventh-round pick (64th overall) in the last draft, Guay already knows the Tiger-Cats' plans for him.

“At the next level, Hamilton sees me as a center,” said the 6 ft, 2 in, 300 lbs player. During camp, I started as a guard and they moved me to center when they felt I was more comfortable. In both preseason games, I played the value of a match. A quarter against Montreal and three quarters against Toronto. ”

Whether he plays as a guard or as a center, Guay and his inside teammates will have to come up against two good tacklers on Sunday against the Redbirds. Nicholas De Francisco-Paul and -Jonathan Wilding represent two of the key elements of the McGill defense. Formerly of the Spartans of Old Montreal, Wilding will regularly rub shoulders with his former teammate Samuel Quevillon.

” They are two excellent tacklers and it will be a good challenge, mentioned Guay. It is certain that we would like to run and continue our momentum, but the two tackles of McGill are solid.   »

Guay isn't worried about being surrounded by two guards with little starting experience. “Samuel and Alexandre [Masri-Fliss] are two young guards, but they were highly sought after coming out of college and they are talented, said the bachelor in engineering. There is no problem. »

The McGill center rocks and rolls after stellar first game

Redbirds first-year quarterback Éloa Latendresse-Regimbald in a game against the Rouge et Or on September 3.

Despite a flying start in her first career game, Éloa Latendresse-Regimbald believes that her work has only just begun.

“Honestly, it's a difficult first season,” admitted the McGill Redbirds center. It is a season of learning on several aspects. There is a big gap between the college and university levels.  I am not disappointed with my start to the season, but I am not proud, summed up Latendresse-Regimbald. It's the same assessment for the team, but we're making progress.”

“We have a rebuilding team and we have to create a new culture, to pursue the product of the Vanier Cheetahs. I was one hundred percent aware of the situation when I joined McGill and I'm really happy with what I got myself into. he had known in the collegiate ranks.

“The size of the guys and the speed of the game are very different, he indicated. The defensive fronts are more diversified compared to the collegiate. In football with three tries, you have no room for error otherwise you will pay dearly.

The last-game loss to the Université de Montréal Carabins was a learning curve for the 6 4 in, 185 lbs center, who was the victim of nine sacks.

“The Carabins knew they were up against a rookie quarterback and they really put a lot of pressure with a seven-man front,” he explained. By my second reading, they were already in the backfield. Their linebackers were very aggressive. You improve by facing the best. »

« Éloa will grow out of this game, said the pilot of the Redbirds. We are very happy with his first season. Because he has immense talent, we sometimes tend to forget that this is his first season. Despite being 0-4, he keeps smiling and is always ready to work.”

If he cut through the Rouge et Or defense with both his arms and his legs during the first duel between the two formations, Latendresse-Regimbald expects a different confrontation for the second leg.

“Laval's defense wasn't ready for us and we took them by surprise,” he said. I can't wait to play my first match at PEPS in an incredible stadium. Fans will try to get into my head, but there are only 24 players on the field no matter how many fans and I'll be able to stay in my game.

«  Guys always have great stories to tell about games in Laval and I'm excited to experience it for the first time, add the author of a 391 passing and 132 passing yards the race against the Rouge et Or at its baptism of the university ranks. I was considering the USA option and Laval is the closest to the NCAA. My dream is going to come true somehow.”