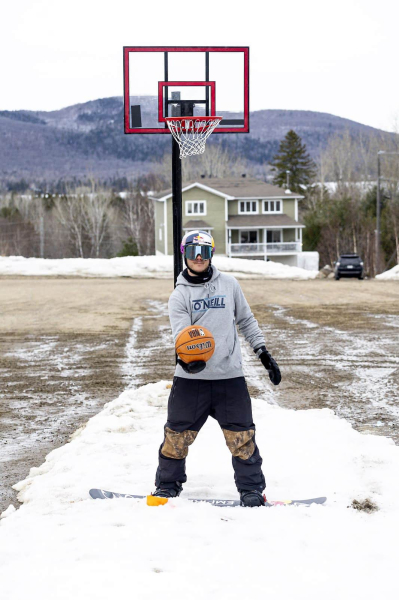 Skateboarder Sébastien Toutant skips the competition season to devote himself to his video projects.

Throughout his career, Toutant has always loved shoot videos of his exploits on the snow, but he never did it full time due to the series of competitions which left him little respite.

The post-Olympic year was wanted a perfect time to unleash his creativity.

“In my world, there are not only competitions, says Toutant from the outset. Some snowboarders live only from video. After 17 years, I still love snowboarding and it will do me good to let my creativity flow. It's a new challenge that excites me and I was there in my career. I'm having fun.

The Quebecer made jumps on the different elements of the track.

Olympic gold medalist in Big Air in Pyeongchang in 2018 and multiple medalist at the X Games, Toutant is not closing the door on a return to the competition circuit, but he wants to take full advantage of this new start.

“It was a big decision not to do any competition this year, he underlines, but I want to devote myself entirely to video, which I have never been able to do in the past. I'm not saying I'm retiring from competition. We will see in a couple of years, what I will do. Maybe I will miss the competition after two years. It is too early to say whether I will return to competition or not.

Sébastien Toutant and his sponsor Red Bull landed at Saint-Donat station last spring when the center was closed to set up a course which has 22 elements.

“It's time to do projects that excite me, to pursue the 30-year-old snowboarder. It's not just slopestyle and Big Air. I have been blessed to compete for so long and to be successful. I have fewer goals now and that's why the movies appeal to me a lot. he is fine with his decision.

“For the first year, it's going to be weird watching the guys and I'm going to have a little heartache, but I'm going to watch the competitions and cheer on my friends.”

Started in his condominium during the pandemic only for fun, the idea of ​​an obstacle course moved to the mountains and it became a winter course.< /p>

“During the pandemic while we were housebound, I did an obstacle course at my house using furniture, a ball and a trampoline, which I finished with a shot from behind into a basket of basketball,” says Toutant. I shared the video on my social networks and the response was very good.

The snowboarder surrounded by his team in front of camera installations.

Toutant and its sponsor Red Bull landed at Saint-Donat station last spring when the center was closed to set up a course that has 22 elements. In particular, he goes through the chalet with his board on his feet before finishing with his basketball shot.

Concocted in a single take, the 2 min 30 s video was released last week.

“From a project for fun, it became immense when we found himself in the mountains. We needed three weeks to build the course and a few days of filming. It's bigger than we thought. »

In this adventure, Toutant can count on the support of his sponsors who continue to support him even if he has abandoned the circuit of competition, which gives him financial security.

“The competition scholarships were a bonus that I could get with the videos,” he says. There are sums related to the number of views. Beyond the money, I wanted to film and carry out projects. I'm also thinking of making a documentary and films about travel. ”

“I want to stimulate the snowboard industry and interest people who don't know my sport”, concludes  Everything.