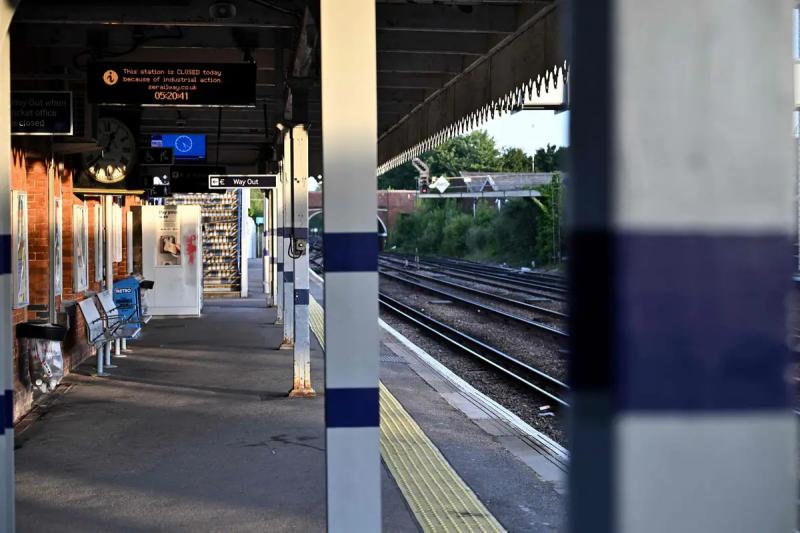 LONDON | British railway workers carried out their second day of strike action on Thursday after unsuccessful negotiations over pay rises in line with inflation, which is at record highs and fueling growing social unrest.

This is the second major strike day of the week, which could be followed by a third Saturday. Around 40,000 members of Network Rail's Rail, Maritime and Transport (RMT) union and 13 rail operators are following the strike.

Only one in five trains was running and the lines were only open between 7:30 a.m. and 6:30 p.m., a shorter time slot than usual. Several stations were deserted, travelers having obviously followed the instructions to postpone their trips.

Faced with this historic mobilization and while discontent is spreading among postal workers, teachers and even lawyers, the government has adopted a very tough position, despite an expected price increase of more than 11% at the end of the year.

“It is important to remember that these strikes are unnecessary. I think people should get around the table and solve the problem”, insisted Boris Johnson on the sidelines of a trip to Rwanda where he is taking part in a Commonwealth summit, stressing the importance of carrying out “sense reforms of the rail system

His government announced on Thursday its intention to change the law to allow the use of temporary workers to replace strikers and reduce the impact it considers “disproportionate” of the strikes.

Subject to the Parliament's approval, these changes are expected to come into force in the coming weeks and will apply to England, Scotland and Wales.

For Transport Minister Grant Shapps, this reform is “vital” and “will ensure that any future strikes will cause less disruption and allow adaptable, flexible and qualified staff to continue to work”.

The government also announced that it was increasing the maximum damages that unions can be ordered to pay when the strike has been found to be illegal. For the largest unions, the maximum compensation will increase from 250,000 pounds sterling to 1 million (1.16 million euros).

The RMT union, which has called for a strike, is demanding wage increases in line with inflation, but also denounces the prospect of “thousands of layoffs” and the deterioration of working conditions.

A door -Network Rail's spokesperson said it was “disappointed” at the failure of negotiations and called the strike “unnecessary and premature”. This public manager of the railway network called on travelers to take the train only if necessary.

The TSSA union indicated for its part on Wednesday that its members within Merseyrail, one of the many private rail operators, had accepted an offer of a 7.1% pay rise, putting a bit more pressure on negotiations between RMT and employers.

“Wage increases are possible and fully justified” , the union tweeted on Thursday.

Kathy Mazur, regional organizer of the RMT union, warned that the strikes could spread to other sectors.

“I think the people are just fed up, inflation is skyrocketing, no one has had a pay rise in three years,” she said outside Euston station in central London.