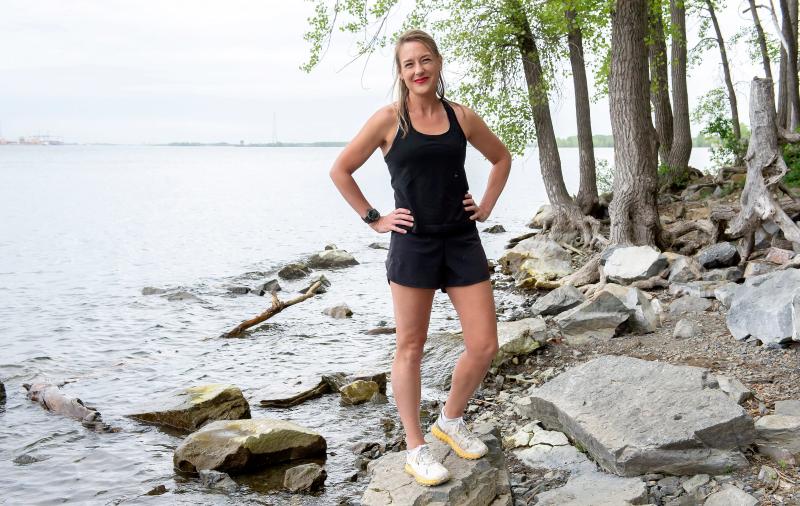 Jacinthe, a young man in his fifties, discovers running. While her spouse, Bernard, mopes on his sofa, she puts on her shoes and lets off steam completely. The more Jacinthe blossoms, the more Bernard is afraid of losing her. And while the woman revives and metamorphoses, the man sinks. Anne Genest describes the mechanics of this fragile duo and the energizing power of running in her second novel, Sweat is a Desire to Evaporate< strong>.

Once she reached her fifties, Jacinthe discovered running. It is a revelation for her. Her spouse, Bernard, does not follow her in this fitness and finds that she is changing. He notes everything in a notebook, to distract himself, because he finds the time long after the sale of his bookstore.

The more he writes down his observations, the more he sees that Jacinthe is changing… and the more he has afraid of losing her. Helped by the tobacconist, his ally, Bernard prepares his revolt. Jacinthe lives again, Bernard sinks.

Anne Genest, ultramarathoner, told this story from the point of view of the guy who sinks, who becomes encrusted in his couch, who comes undone little by little. “I wanted to be sure that I could have a certain detachment from Jacinthe's transformation. I wanted to write from the point of view of someone witnessing the transformation. And it's interesting to make men talk about their intimacy. »

She wanted to give him the chance to express himself. “Me, as a runner, I run a lot with men because in ultramarathon, there are very few of us, women. Men have as many emotions as us, experience as many hardships as we do, but it's strange, in the literature, we don't mention it. It is something that is rather rare.”

She also wanted to understand. “I wanted to have a kind of solidarity. I put myself in the shoes of a man and it was a super trippy exercise for me. I had a lot of sympathy for Bernard and I didn't want to let him go, in the end!”

When she started running in 2016, Anne remembers her daughter was under two. “I started running because I was very tired. My daughter still wasn't sleeping and I was looking for a way to regain energy. My sister told me to buy myself a running stroller and go for a run, it would energize me. Me, I was ready for anything, I couldn't take it anymore!”

From the moment she started to jog, walk, run, it was like a release. “It is as if all of a sudden, I came out of a prison! The light outside, the fresh air, seeing the little leaves moving… all of a sudden, I could have time to think. My transformation, which I was going through, I said to myself: wow, we have to talk about it. We have to talk about this energy that can happen. I was 41 and felt like I was 20. I thought this transformation could be the pivot of a story.”

“Jacinta loved sweat. She said that part of her body was leaving gravity behind. By dint of putting herself in this state, by dint of running, she rose above the worries. The more she ran, the less she worried. She eliminated what was wrong. By running, she purified herself. She believed that getting old was a relief. Knowing how to differentiate the essential from the accessory came with age. She had nothing more to lose. She didn't care about injunctions. Like Seneca, she distinguished between living one's life and existing.”