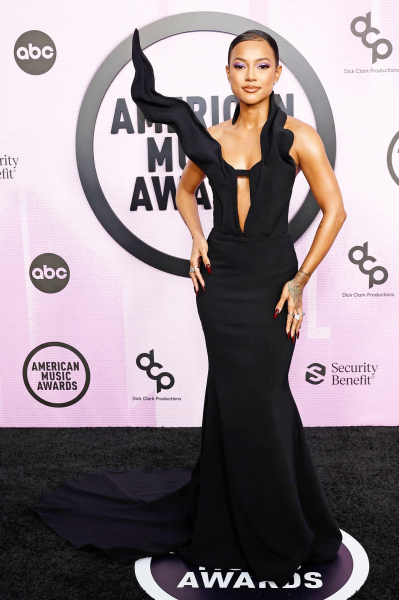 A real wind of originality was blowing on the black carpet of the 50eedition of the American Music Awards. While we are sometimes used to looks lacking a bit of subtlety during this great music festival, the stars have marked the change with novelty, a certain sobriety and effective styling. Thus came silhouettes with new proportions, dresses with atypical cutouts, surprising prints, all praising black, sometimes contrasting with white. The new wave of singers wore creations by lesser-known designers, thereby celebrating international talent. Review of the highlights of this evening.

Dove Cameron and Tinashe have both fallen for looks from the Marc Jacobs collection, but I do have a weakness for the stylistic composition of Dove which takes up the grunge aesthetic of the 1990s, so current at the moment.

Anitta looked stunning in this shimmering Mugler creation, which had a surprise on the back!

Karrueche Tran opted for the originality by drawing this sculptural black outfit from the Christian Siriano collection.

It is the shape of the cocoon that unites these two very different silhouettes. Liza Koshychose the rock look of a two-tone quilted and shiny material with this Morfium jacket while Muni Long played the card of elegance by opting for this pleated dress Juana Martin.

The veil that wraps rapper Latto somehow dresses up this bare corset look by Dilara Findikoglu. In addition, the transparent sandals elongate her silhouette without distracting the gaze.

The gloves are the accessory of the moment and they are the perfect touch to complete the Moonsori outfit of the singer Becky G.

Slipped into this studded jumpsuit from The Blonds, Taylor Swift is not among the most beautiful of the evening, the pleats at the waist distort her silhouette. Too bad!

The phrase “a look to walk the red carpet” takes on its full meaning for Machine Gun Kelly who alluded to the impractical aspect of his mauve wool and neoprene suit adorned with a multitude of peaks signed Dolce & Gabbana when it came time to go to the bathroom.

It was with a broad smile that Roselyn Sanchez sported this heavily embroidered dress from the Indian designer Faiguni Shane Peacock.